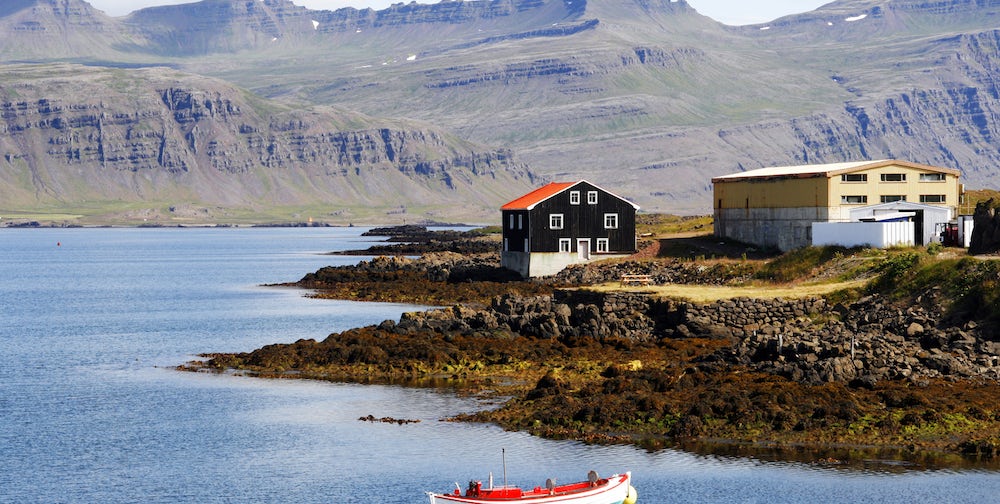 Djúpivogur is a serene small town in the Eastfjords of Iceland.

As the first stop in a tour of the Eastfjords, it’s hard to beat the scenery and serenity of Djúpivogur. One of Iceland’s oldest settlements, it formerly played host to a local cooperative, and is now a member of Cittaslow, an international association for slow living. And for good reason — it’s a place to forget the daily bustle, and enjoy the moment.

The town can be reached in a day’s drive from Reykjavík in fair weather, although it makes for a long day. Better to stop for the night en route, as there are plenty of things to see, and it’s more fun not to have to rush. The south coast is home to Vík’s black beaches, the glacial lagoon Jökulsárlón, and Vatnajökull National Park, along with countless smaller roadside pull-offs which are great for picnics or short but scenic breaks from driving.

Djúpivogur is located at the southernmost end of the region, where the scenery moves from gently sweeping beaches to jagged cliffs. It’s located at the tip of Búlandsnes, between Hamarsfjörður to the south and Berufjörður to the north, which makes for spectacular sea views on either side of the peninsula. The mountain Búlandstindur rises behind the town in an impressive pyramid.

There’s plenty of hiking in the area, especially in summer, but at all seasons, it’s possible to take the short walk seaward to Bóndavarðan, the cairn that was built as a lookout point after 17th-century slave-taking raids by North African pirates. 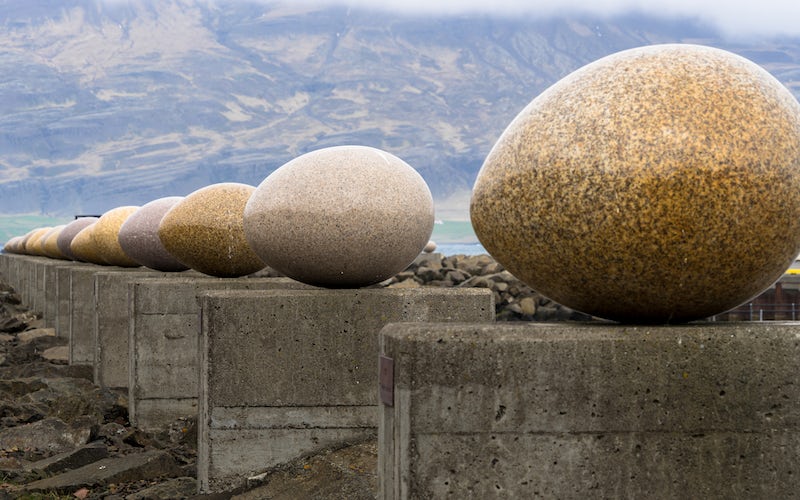 Things to do in Djúpivogur

In town, the café Langabúð contains a local heritage museum, as well as the work of early 20th century sculptor Ríkarður Jónsson, and a memorial to politician Eystein Jónsson and his wife Sólveig Eyjólfsdóttir. Dating from 1790, it is Djúpivogur’s oldest building; for something newer, check out the Gleðvík eggs, an art installation by Sigurður Guðmundsson near the north-west end of town. Each gigantic stone egg represents that of a local species of bird.

The swimming pool is also pleasant, but unlike most pools in Iceland, the majority of it is indoors. Luckily, the hot pots of Hoffell are not far from the ring road, between Reykjavík and the Eastfjords. For the experience of soaking in the midst of glorious Icelandic scenery, skip the pool and head for the hot pots instead.

A short walk through town will lead you to the Sphinx, a distinctively-shaped rock surrounded by crags and small cliffs. This is a great place to explore, with rocks to clamber over and plenty of bird life to see and hear. The best time to visit is evening, as the sun sets directly behind Búlandstindur and its black silhouette towers over the lower peaks. The view of the fjords from even this minor elevation is stunning, with a few small islands breaking through the sea. 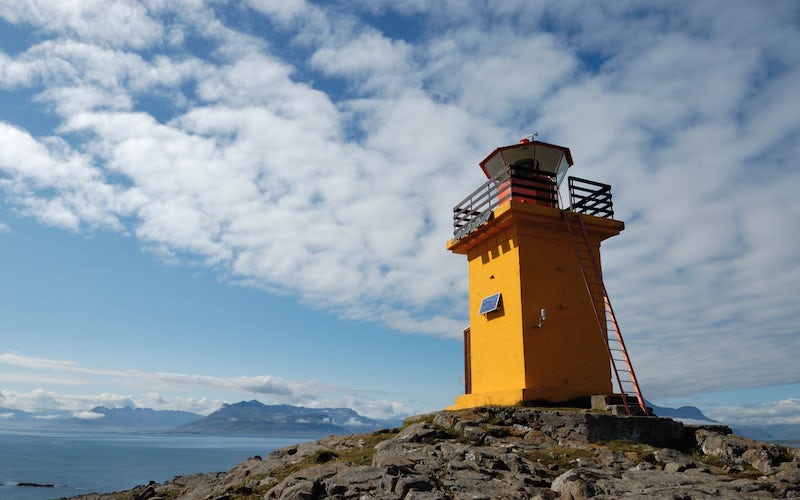 Djúpivogur’s most unique attraction may be its access to Papey, the nature-rich island where once, according to the Book of Icelanders, the small band of Irish monks who were Iceland’s first human inhabitants came ashore and briefly settled. Today it is uninhabited, unless you count the hundreds of puffins, guillemots, and seals. It also serves as a breeding ground for eider ducks. In summer, a boat leaves the harbour daily on a four-hour tour of the the island, including its abundant bird life and the smallest wooden church in Iceland, still standing from Papey’s years as the only inhabited island off Iceland’s east coast.

There’s a lot more to see in the Eastfjords, and Djúpivogur is only the start. A few fjords away, you’ll reach Fáskrúðsfjörður, the only Icelandic-French bilingual town in the country, with its history of French fishermen presented in a compact but interesting museum. Further inland is Egilsstaðir, the largest town and the site of the regional airport, poised at the end of Langarfljót — the lake that is said to contain a monstrous serpent. The adventure has just begun!

To stay, check out Hótel Framtið, Berunes Hostel, or the local campsite. There are few places to eat in town, but Hótel Framtið offers full meals and a pleasant atmosphere, and Langabúð coffee house provides coffee and cakes. There is also a shop and a Vínbúðin liquor store, one of six in the region, with the limited hours of 16:00-18:00. The bank and post office are open weekdays, 11:00-16:00, and the tourist information office located in Langabúð is open daily in the summer, 10:00-18:00.

What To Do in the Eastfjords of Iceland
Story