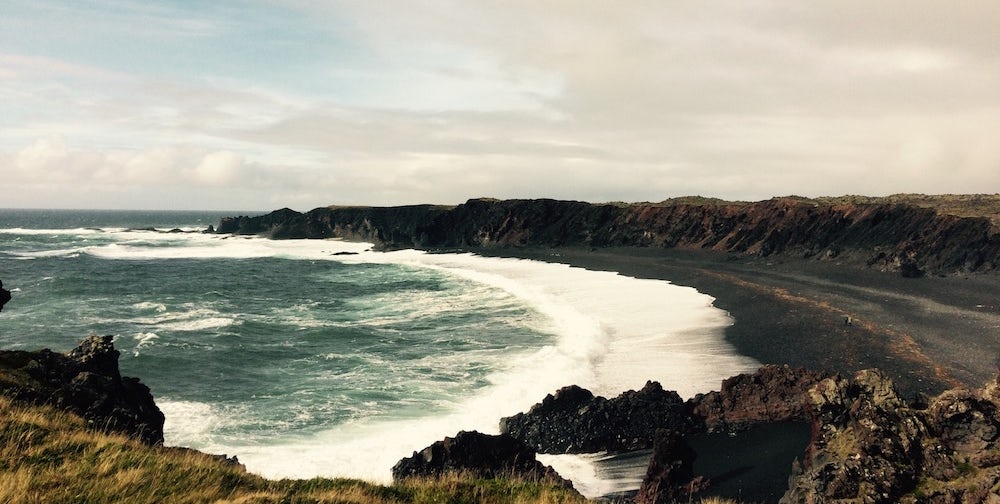 Djúpalónssandur: A Majestic Black Pebble Beach in the West of Iceland

Have you ever visited a black lava pearl beach? Djúpalónssandur is not only a great example of a true black pebble beach, it is also one of the most beautiful places to see while visiting Snæfellsnes peninsula in the western part of Iceland.

During my stay in the west part of Iceland, I had a great chance to visit amazing places and natural wonders. Djúpalónssandur has always been one of my favorite locations in Snæfellsnes. This black pebble beach is located in the middle of Snæfellsjökull National Park; a national park full of lava fields mostly covered by moss, created around the famous Snæfellsjökull glacier.

Snæfellsjökull, an old volcano which top is covered by a glacier, has also inspired novelists such as Jules Verne in his novel Journey to the center of the Earth. The Icelandic Nobel laureate Halldór Laxness also wrote a famous novel that revolved around the glacier, called Kristnihald undir jökli. 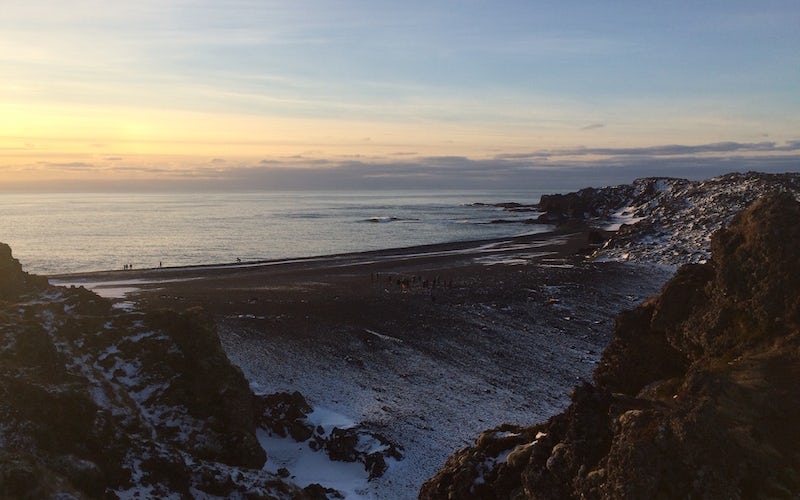 A bit more than just a beach

Only a short walk down towards the beach will bring you to an amazing lava field with many beautiful rock formations. If you take a walking path on the right side of Djúpalónssandur, you will definitely pass by a wonderful Svörtulón or the Black Lagoon. 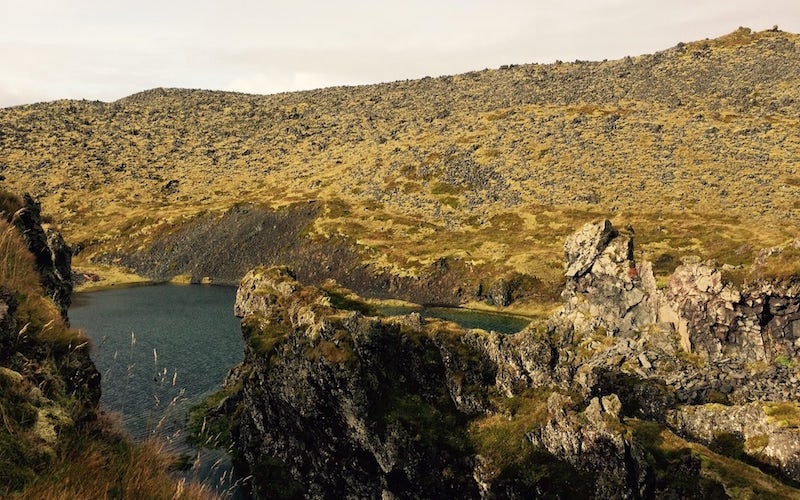 On the beach itself, you will notice the iron debris from the British trawler which was wrecked there. Those pieces are kept in memory of English fishermen and should not be touched.

Not only respect for people but also respect for nature is deeply seated in mind of each Icelander. There are many interesting lava rock formations and amazing coast cliffs, which make Djúpalónssandur a very popular spot to visit in the Snæfellsnes peninsula. Therefore, it is not suggested to climb the rocks or in any other way influence the natural phenomena found on this beach. It is also believed that visitors should not take pebbles from the beach since this act can bring misfortune. 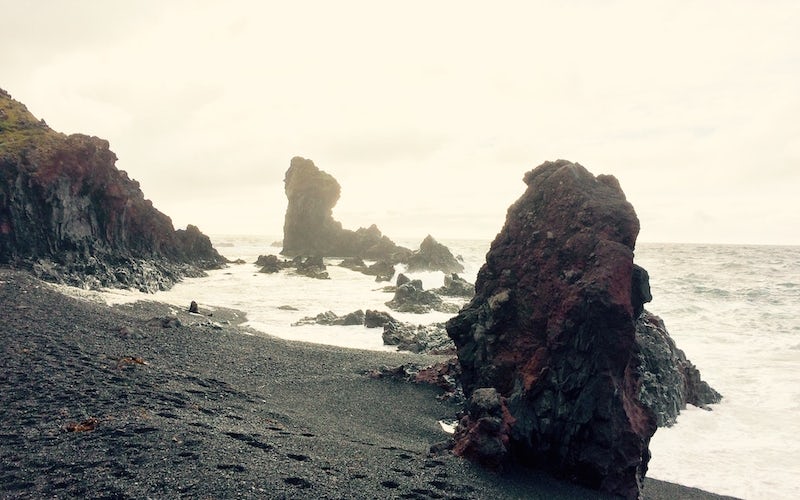 Many sagas and tales are strongly connected with this dramatic black pebble beach. Djúpalónssandur is considered to be one of the most famous elves and trolls locations in Iceland. According to folklore, Kerling or the Troll Woman can be found in one of the rock formations on Djúpalónssandur. Karl (male troll) and Kerling (female troll) are thought to be trolls that were turned into stones when they saw daylight. These two troll formations are well known all over Iceland. 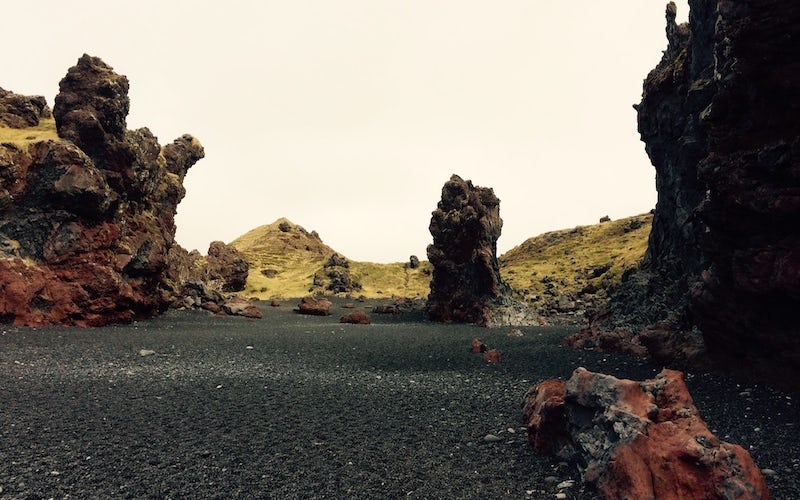 When walking to the beach, you can not miss four differently sized stones lying next to each other. They are called Aflraunasteinar - Steinatök or the lifting stones. As the sign next to them says, they were used to measure the strength of Icelandic fishermen. When visiting Djúpalónssandur, do not forget to try to lift at least one of them and measure your own strength. The biggest stone weights 154 kg and the smallest one 23 kg, so everyone should be able to lift at least one of them!

Not a swimming location!

As everywhere else in Iceland, it is very important to stay safe and do not underestimate the power of nature. It is very dangerous and not suggested to swim at this location since the waves can be very strong and unpredictable. There is a warning sign by the parking lot, but many people still tend to ignore it. A number of accidents happened when people tried to approach the sea or were just playing on the shore. It is definitely not the best idea to take a swim there, so if you feel like trying Icelandic water, rather choose another spot!

Djúpalónssandur is, by far, one of the most beautiful black lava pearl beaches you can find in Iceland. Full of mysterious rock formations, breathtaking coast cliffs, amazing black pebbles and huge strong waves, Djúpalónssandur is worth visiting while passing Snæfellsnes peninsula. Do not miss out the geological uniqueness of the west and come to visit Snæfellsnes or, as we usually call it, Iceland in a nutshell!

When passing two former fishing villages Arnarstapi and Hellnar, you are only a few steps from your destination. It takes a short drive from the main road to reach Djúpalónssandur. After leaving your car on the parking lot, you can take several hikes around the coast and explore different rock formations in this area.

When is the best time to visit?

Personally, I have visited Djúpalónssandur in all the seasons. If you want to explore the area and take several hikes through lava fields, I would definitely recommend to come in spring/summer/autumn, when the hiking conditions are the best. If you are visiting in the winter, you should be prepared for more difficult conditions, both for driving and hiking. It is possible that you will only be able to reach Djúpalónssandur with a 4x4 car, since the road to Djúpalónssandur goes downhill and you might have difficulties on your way back to the main road. 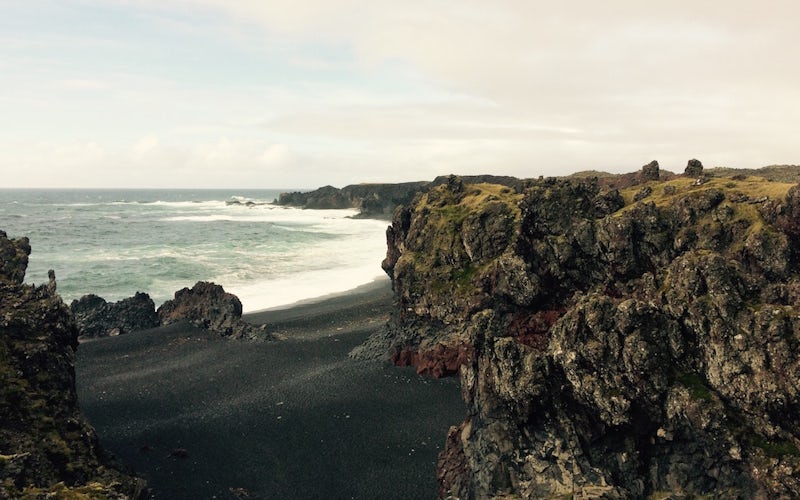 On the other hand, the main road crossing Snæfellsjökull National Park should be open all the winter, unless the weather is too bad. When walking down to the beach, the terrain might get slippery, therefore it is suggested to bring good hiking shoes, ideally to put your crampons on. The weather during the winter time in Iceland can get crazy but it is definitely worth experiencing; it has its own magic. After all, as we often say, the best time to visit Iceland is always!

Seals and Sagas on the Snæfellsnes Peninsula: An Itinerary
Story