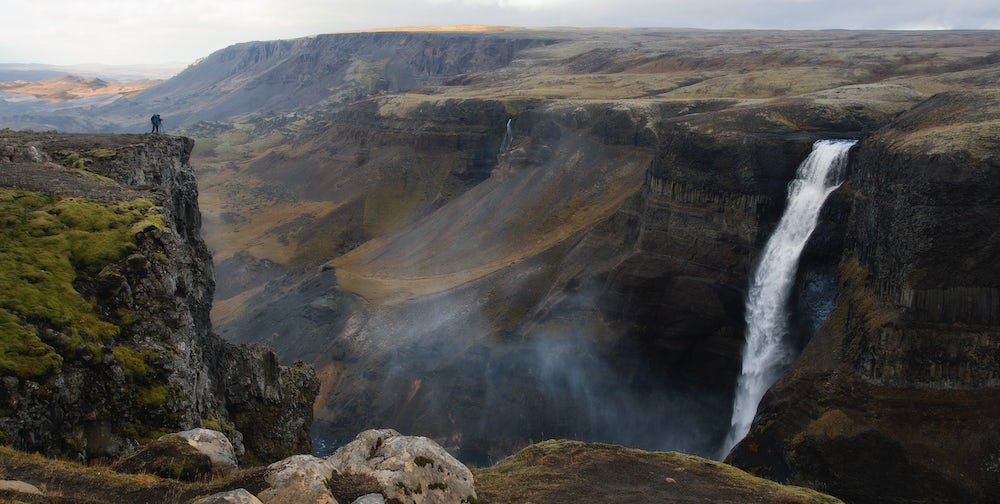 The Best Season to Travel to Iceland

To say that weather plays an important part in travelling through Iceland would be a bit of an understatement. With each season bringing its own distinct flavour, it’s important to know what to expect - but it’s safe to say that it's always unpredictable.

Autumn comes quickly after the summer fades, but for most, the sweeping changes seen around the country are a welcome sight. Bursting with hues of orange, yellows, and browns, coupled with moody skies hanging overhead, Iceland in Autumn is breathtaking. However, this season does see the wind pick back up, bringing with it the first end-of-year storms, and sometimes even an early descent into winter. Temperatures start to drop, fluctuating between 35°F - 55°F (1°C - 12°C).

September brings with it skies finally dark enough to see the northern lights again, pulsing streaks of green across the night sky. It’s also the time when wild berries grow in the meadows and hills, so you can stumble on some light snacks while out hiking. The mild weather makes this very enjoyable, but always be prepared for showers to appear out of nowhere.

All in all, Autumn gives you a great overall feel for the Icelandic weather; a mix of seasonal weather, storms, and the northern lights. 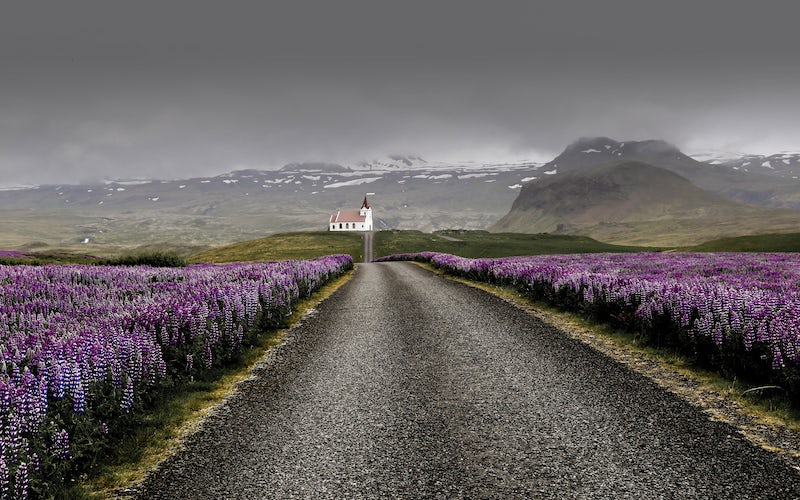 The thought of travelling to Iceland during the winter sends a shudder down many a spine. The dark months only have 4–5 hours of sunlight, bringing with them the most violent of weather. Fierce storms can whip up out of nowhere, blizzards closing roads due to heavy snowfall and poor visibility. But it’s not all terrible news: when the sun does appear over the horizon, it reveals a winter wonderland. Winding black roads snake their way past snow-draped mountains and seeing the glittering glaciers in their natural environment is something that will stay with you for a long time. Even more evident are the geothermal areas, melting the snow surrounding them with their volcanic energy. And even though the temperatures can drop seriously low, the average is higher than you might think – around 32°F (0°C) in the south around Reykjavik.

It’s darker for longer, which means that there’s a longer period when you can see the northern lights, and there’s nothing like watching the daggers of green light shimmer and dance over the snowy landscapes from the warmth of a hot spring. Ski fields in the north are pleasantly relaxed and uncrowded when compared with the rest of Europe, and Reykjavik in the south comes alive with Christmas and New Year’s Eve festivities; the sheer number of fireworks going off over the city at midnight on New Year’s Eve has turned the city into one of the hottest destinations to be on the big night in all of Europe.

Travelling Iceland in winter can be magical, or it can be a stormy nightmare. Either way, you’ll leave having experienced something that you’ll never forget. But do remember to be cautious, pay attention to any weather warnings and road conditions, and always have a backup plan. 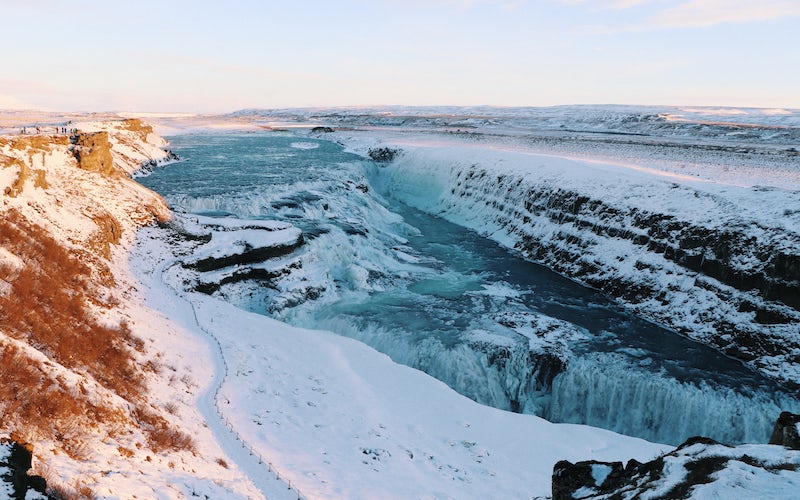 After the long winter, Icelanders collectively breathe a sigh of relief when Spring finally arrives. It’s a short affair, and no one really knows at exactly what time they can start calling it Spring, but everyone can agree that the closer to April it gets the longer the sun is up, and the better the weather. Temperatures start to warm up, the highs averaging around 48.9°F (9°C) in May, but there always seems to be just a hint of warmer weather before temperatures plummet back down towards freezing – it has even been known to snow in Reykjavik during May.

The countryside comes alive thanks to the sun melting away the last of the snow, so waterfalls and rivers are flowing with a renewed vigor, and wild flowers pop up in the most unlikely of places across the country (look out for the famous fields of purple lupine). April presents the last chance to catch a glimpse of the elusive northern lights, and mid to late May marks the early arrivals of sea birds, flocking to the craggy cliffs on Iceland’s coast to nest and breed for the summer. The start of the hiking season commences, but always be careful and check the conditions before setting out - avalanches occur quite frequently.

Spring is a lovely time of year to visit Iceland, as the whole country and its population comes out of its winter hibernation, and visitor numbers aren’t as crazy as during the summer. 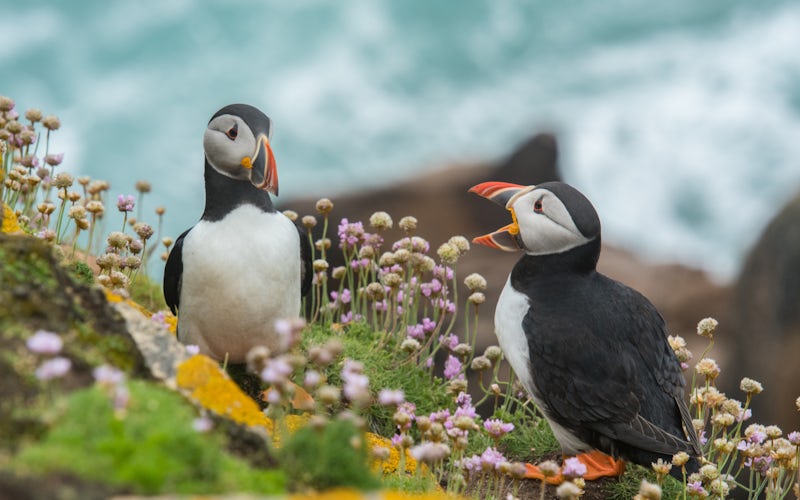 Summer time is the most popular season to visit Iceland. It’s when the weather is at its most reasonable, and the almost endless light means loads of time for exploring the countryside. The golden hour lasts for an age, making it a dream come true for photographers, and the lush green of the countryside contrasts beautifully with the ever-white glaciers. The warmest of days will reach 75°F (24°C), but it’s only on rare occasions when this happens. You can still expect a sprinkling of rainy days here and there (this is Iceland, after all), and sometimes the summer disappoints everyone and is more rain than sun.

The Icelandic highlands slowly open up in June and July, the treacherous mountain roads leading to some of the most spectacular nature on offer in the entire country, but only accessible by 4x4s. The most popular hiking route in the country, the Laugavegur Trail, is at its most accessible and busiest. For those searching for hiking routes less-travelled, look towards Hornstrandir in the Westfjords, or the Jökulsárgljúfur Canyon in the north. Reykjavik really comes into its own during the summer, the bustling cosmopolitan centre of the entire country running several festivals and cultural events throughout the season.

Summer remains the king of seasons when it comes to visiting Iceland, but of course it’s also the busiest and most expensive time of year. However, the endless light means that you can always reverse your clock and explore during the quieter evenings when everyone else has gone to bed. 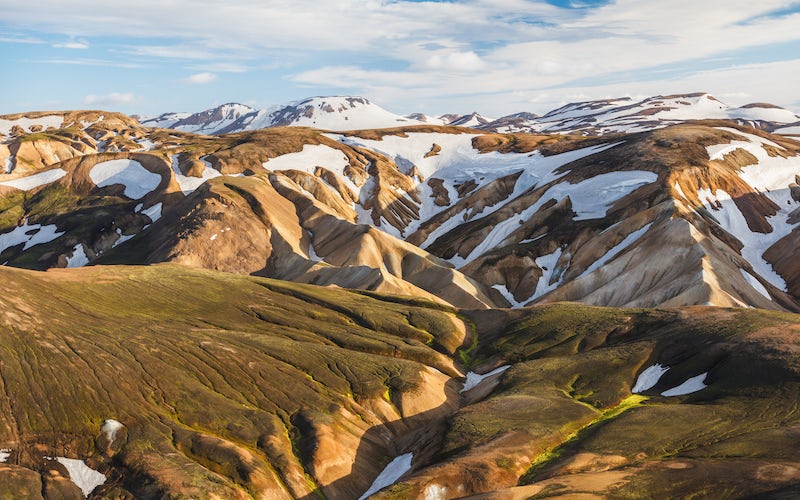