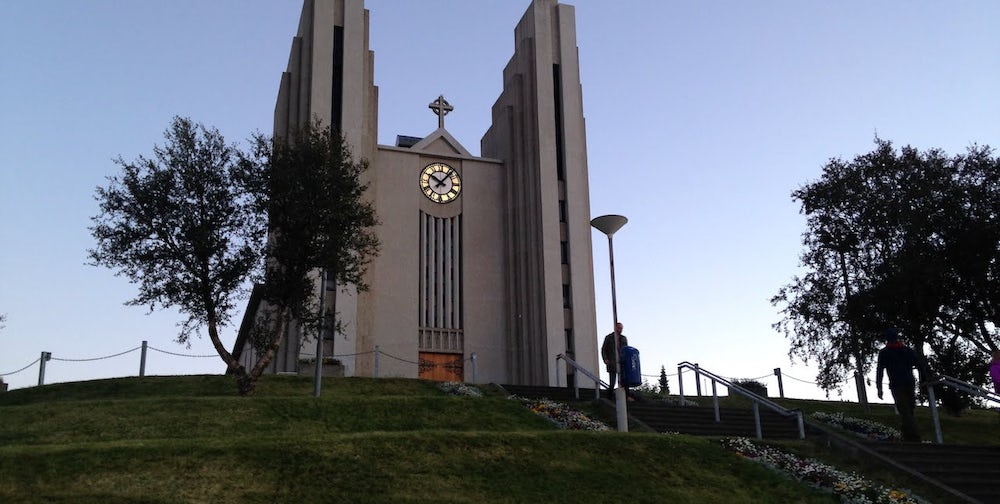 The Best Attractions near Akureyri, Iceland

Akureyri is the largest town in North Iceland and the largest town in Iceland after the greater capital area. It‘s a lovely town to visit, conveniently situated close to numerous natural wonders. Here, I‘ll share some of my favourite attractions near Akureyri. Note that the list is far from being exhaustive – there are endless things to do and see in the region.

Staying in Akureyri is a good option if you are considering spending some time exploring the gorgeous attractions in North Iceland. The most convenient thing to do in terms of getting around, is to rent a car. That allows you the freedom of planning your own little day trips from Akureyri without having to adhere to the schedule of a bus company.

If you are staying in Akureyri for some time, and you want to familiarize yourself with the town before you go, here are some very informative articles written by my colleagues:

But let's now move onto some of the best attractions in the area: 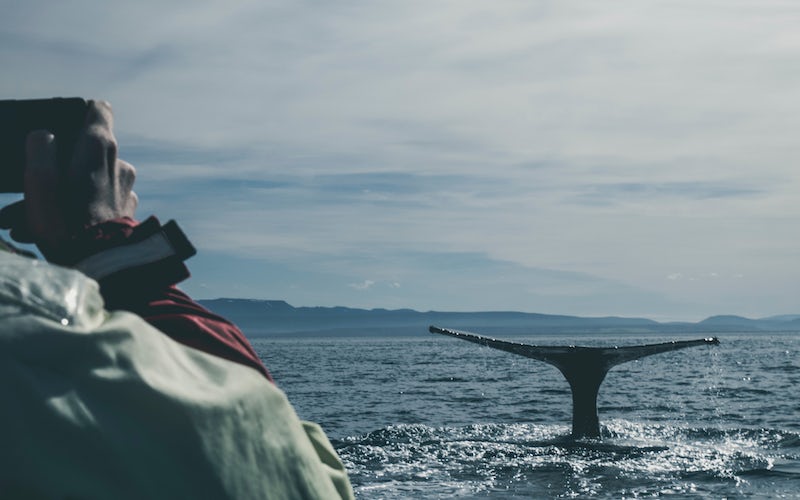 Nothing compares to witnessing the ocean's gentle giants in action. Unsplash/Davide Cantelli.

Husavik is an incredibly pretty town east of Akureyri, known for being one of the best whale watching hubs in Iceland. It rose to fame in 2020 after it became the setting for Will Ferrel's satirical Eurovision movie, Eurovision Song Contest: The Story of Fire Saga.

A perfect plan for Húsavík, in my opinion, starts with some whale watching. Note that although it is possible spot the whales throughout the year, sightings are more common during the summer. After spending some time at sea, head to the GeoSea Spa to unwind. I visited this newly built geothermal spa by the oceanside last summer and it was such a pleasant surprise. Check out some of the local seafood restaurants if you want to indulge in fresh fish after the spa. I've dined at a place called Naustið and I can wholeheartedly recommend the fish soup. 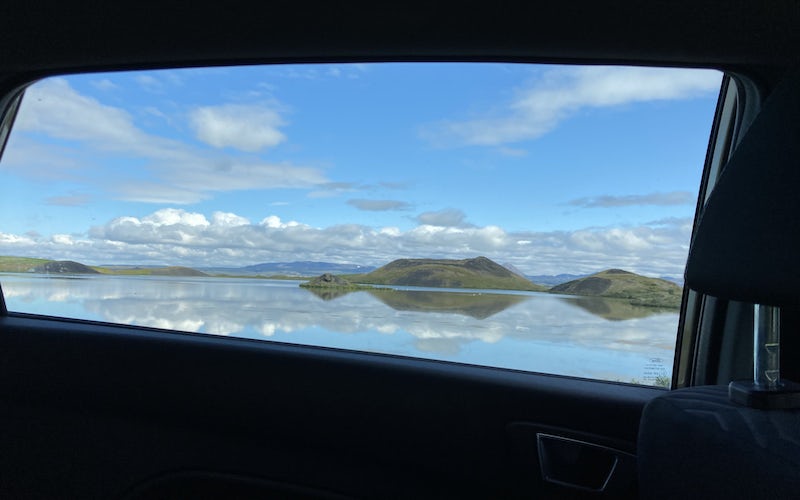 Mývatn, seen from the car. Wonderguide/Nina.

Mývatn is a stunning lake, around 30 minutes drive from Akureyri. There are plenty of attractions scattered around the lake, such as Dimmuborgir (rock formations), Grjótagjá and Stóragjá (geothermal ravines) and Skútustaðagígar (pseudo craters).

For those who like to break up their busy day of sightseeing by soaking in hot pools, Jarðböðin á Mývatni is spa, whose milky white colour resembles the iconic Blue Lagoon.

Note that unfortunately, midges are abundant in the Mývatn area. Mývatn actually translates to Lake of the Midges! They are super annoying and may even bite. If you have a head net, you should definitely bring it with you. 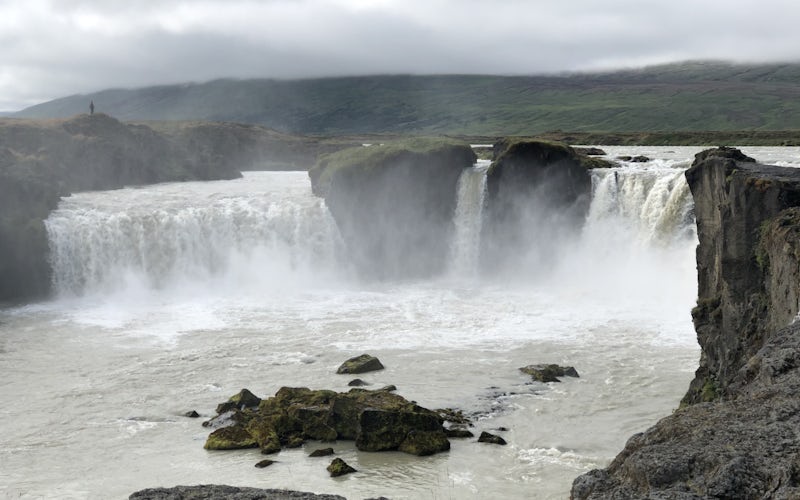 Goðafoss on a cloudy day. Wonderguide/NIna.

Goðafoss Waterfall is conveniently situated by the ring road, only a stones throw away from Akureyri. I have only seen it in the summer, but I've heard that it is even more picturesque in the winter. 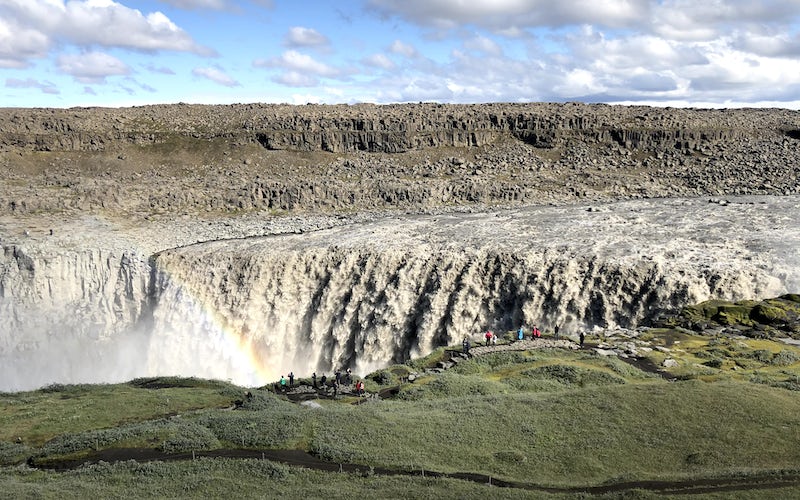 By Dettifoss, you feel like nature is screaming at you. Wonderguide/Nina.

Dettifoss is the most powerful waterfall in Europe. As a huge fan of waterfalls, I can assure you that few waterfalls compare to the awe-inspiring power of Dettifoss. The massive amount of water that crashes into the river below creates a thunderous noise, creating the impression that the earth is trembling under your feet. Gazing into the waterfall is hypnotising, you fall into this strange kind of trance.

You have to walk half a mile or so from the parking lot and to the waterfall. The path is not paved, but very accessible. If you have a raincoat/rain poncho in your car, I advise you to bring it along since there's always some spray in the air near the waterfall. 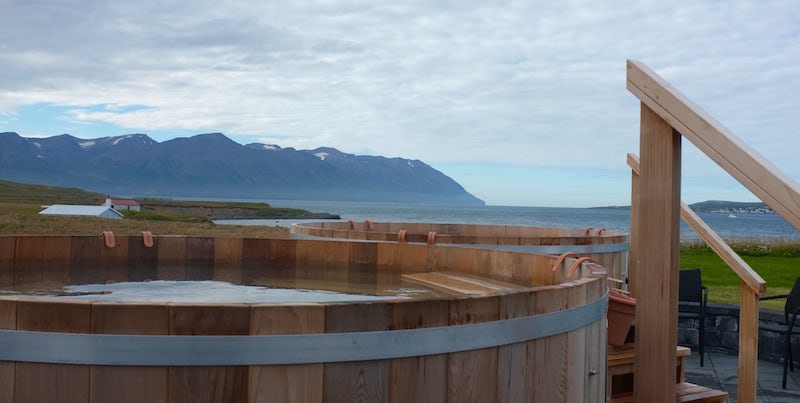 Kaldi is one of Iceland's most successful breweries. It is located in Ársskógasandur, a tiny village close to Akureyri. The latest addition to their brewery is a beer spa. If the concept is new to you, I don't blame you. However, beer spas originate in the Czech Republic, and are a relatively popular tourist activity in the country.

I've been to the Kaldi beer spa once and I loved it. Here's an article I wrote: Bating in Beer: A Visit to the Beer Spa in North Iceland 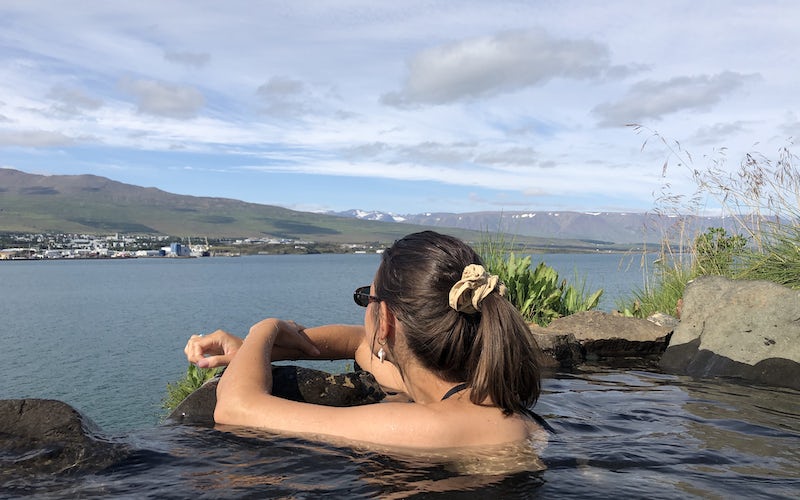 So, the hottest attraction in the vicinity of Akureyri right now is without a doubt a newly emerged geothermal pool which hasn't got a name yet. Although it went semi-viral on TikTok, it has largely remained under the tourist radar so far. When I went there last summer, we had the pool to ourselves which was such an incredible experience.

As I previeously mentioned, the pool isn't called anything yet (although it is sometimes referred to as Foss). Hence, Googling it is a very problematic endeavour. However, I have written an article containing helpful tips about this fantastic little pool: A Local's Guide to the Viral Foss Hot Spring (and Waterfall) close to Akureyri, Iceland. 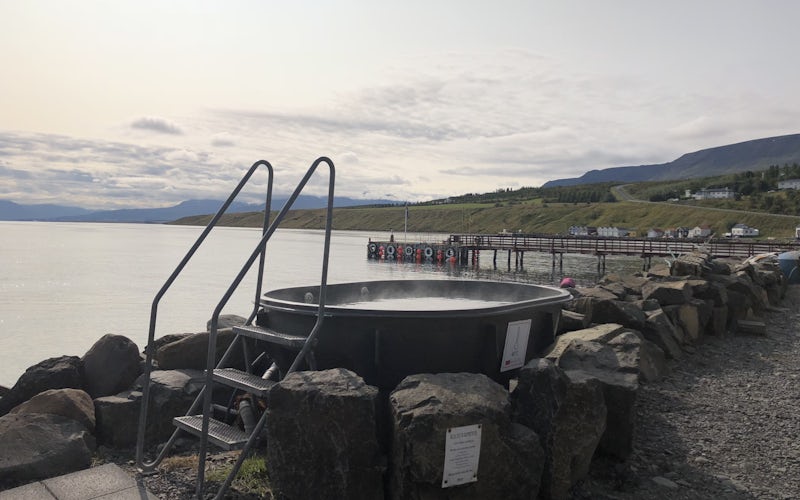 One of Iceland's nicest hot tubs is in Hjalteyri. Go there for art and sea swimming. Wonderguide/Nina.

Hjalteyri is a tiny little village close to Akureyri. It is comprised of a few residential buildings, a hot tub by the seaside and an incredibly cool old warehouse which has been turned into an exhibition space. If you like sea swimming, this spot is ideal since you can lounge in the hot tub afterwards.

Ásbyrgi is one of the most popular natural attractions in the northern part of Iceland. Wonderguide/Nina.

Ásbyrgi is a horseshoe-shaped valley, surrounded by cliffs on all sides and characterised by beautiful birch forests and serene lakes.

Ásbyrgi is a part of the Vatnajökull National Park and you can find numerous hikes in the area. The campsite at Ásbyrgi is a good alternative for those who want to have good time to explore the surrounding area. 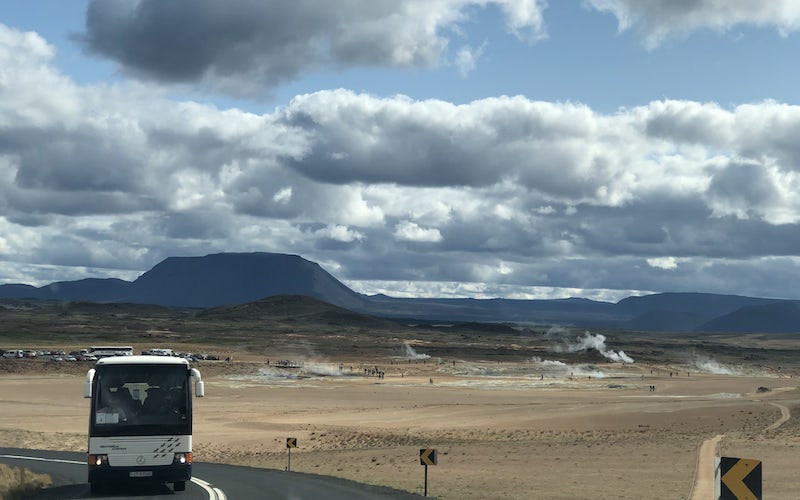 The Námaskarð area is visible from the road. Wonderguide/Nina.

Námaskarð is a geothermal area close to Lake Mývatn. The area is characterised by its abundance of hot springs and fumaroles, and a surreal colour pallette that stems from a unique composition of sulphur-rich minerals.

There is a big parking lot by the road where you can park before exploring the area. As the hot springs are boiling hot, be careful when you approach them. Don't go too close, and watch where you are going. 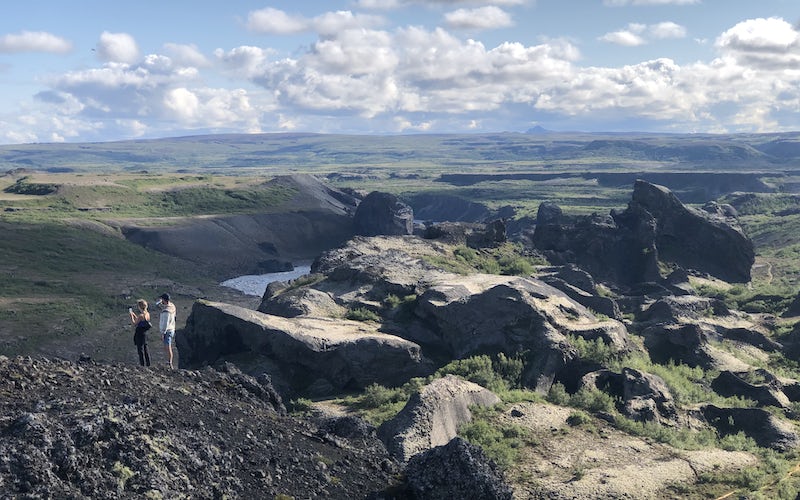 Dimmuborgir rock formations - one of the attractions on the Diamond Circle. Wonderguide/Nina.

The Diamond Circle is a gorgeous tourist route in the northeastern region of Iceland. The entire route is approximately 250 kilometres (155 miles), which means that it is possible to drive the whole circle in one day.

I have driven the whole route two times. When I did it for the first time in 2017, some parts of it were still unpaved, which slowed us down a bit. When I drove the Diamond Circle again in 2021, we could fit in a few more stops because it took less time to drive.

However, it is still kind of hard to decide what to see and do en route since there are so many attractions to choose from. Some of the attractions are already featured in this article (such as Dettifoss, Mývatn and Ásbyrgi), but if you want to find out more, check out this article: All You Need to Know About the Diamond Circle.

A Local's Guide to the Viral Foss Hot Spring (and Waterfall) close to Akureyri, Iceland
Story