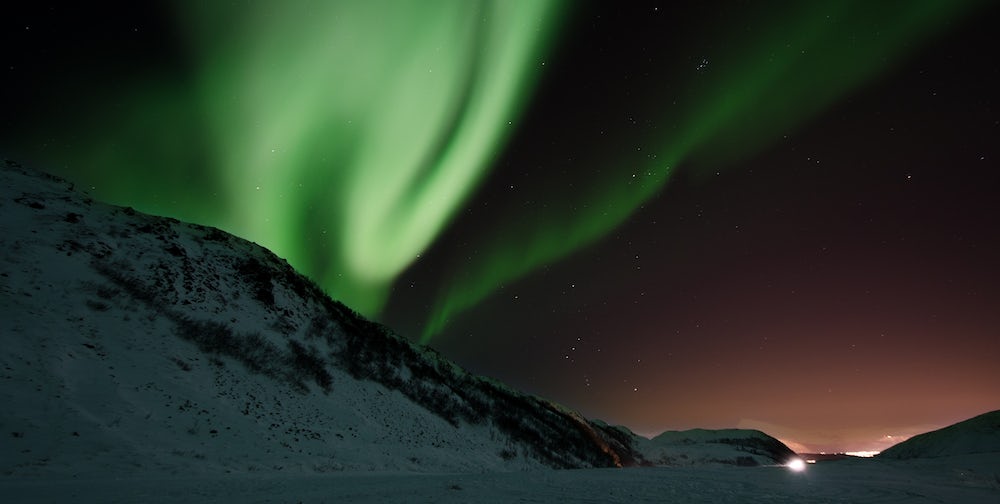 The Best Time to see the Northern Lights in Iceland

In Iceland, The Northern Lights season starts in September and lasts until spring. Many travelers are desperate to see this wonderful phenomenon so I decided to share some knowledge and tips.

I have lived in Iceland for the major part of my life and therefore I’ve seen the northern lights countless times. Despite that, I’m impressed every time I see them.

The northern lights attract thousands of travelers to Iceland each year but unfortunately some of these people return to their homes without any luck. Seeing the northern lights can’t be scheduled beforehand. Sometimes there isn't much activity and other times the visibility is reduced due to clouds or fog.

If you are determined to see the northern lights while you’re visiting Iceland, you should check out the northern lights forecast and head to the place where there is clear skies. The Icelandic met office released this fantastic tool a couple of years ago and here's a great video on how to use it:

There does exist an app called Northern Lights Alerts that allows you to notify others about sightings of northern lights and you can see other people's notifications too, so you can easily stay tuned.

What are the northern lights?

Sometimes the colour-palette is more interesting, with purple, pink or even red tones. 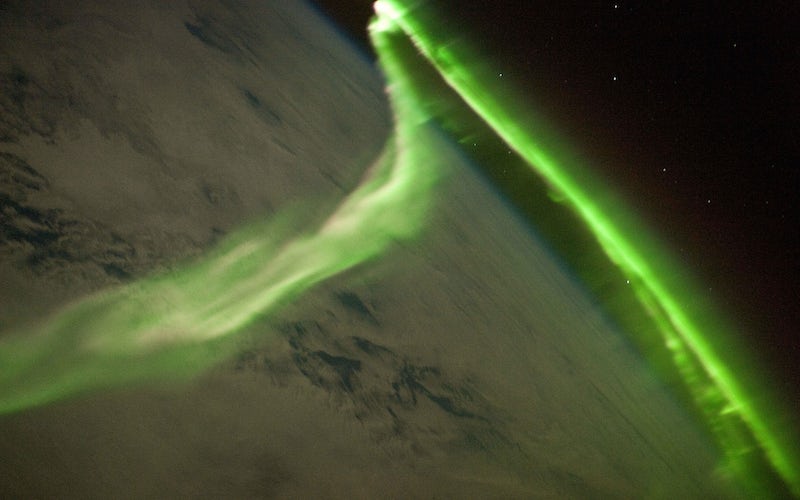 A photo of the Aurora Australis, taken from space (by the ISS Expedition). Photo: Wikipedia.

Where can northern lights be seen?

The northern lights are a frequent sight in arctic/subarctic areas while the southern lights (Aurora Australis) appear in antarctic/subantarctic areas.  The so-called auroral zone is in correlation with the geomagnetic poles, not the geographic poles. 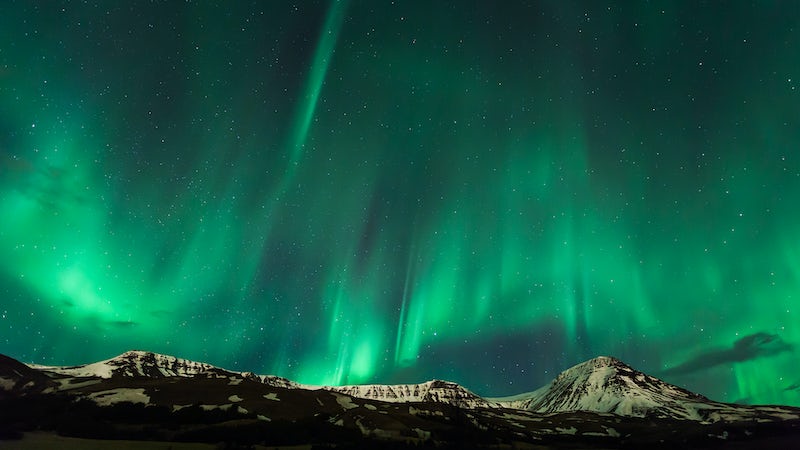 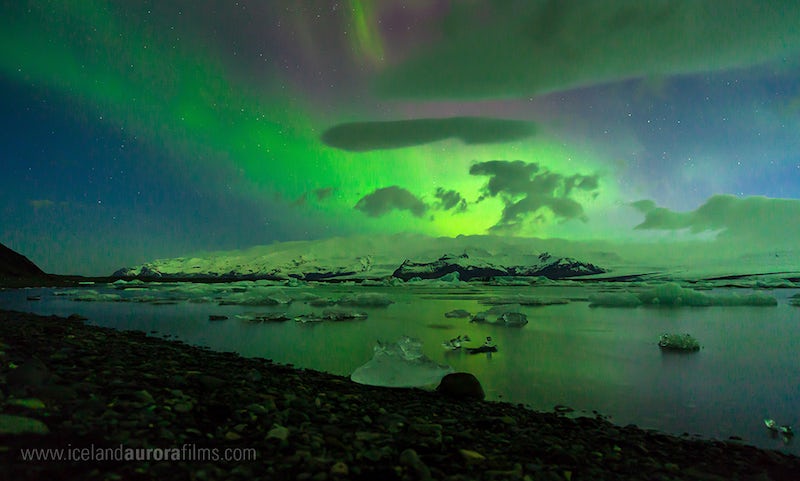 Are the northern lights visible throughout the year?

In Iceland, there’s little amount of darkness from May to August. Aurorae can start to appear in late August, like they did last weekend. They’ll appear every now and then until mid-April. 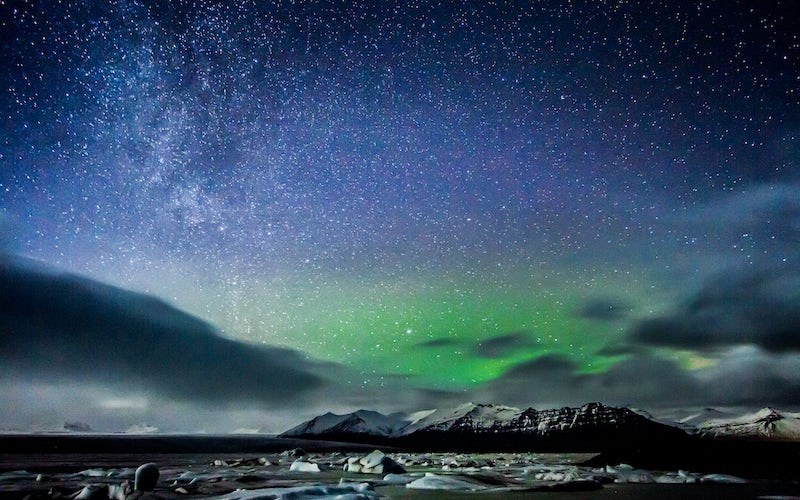 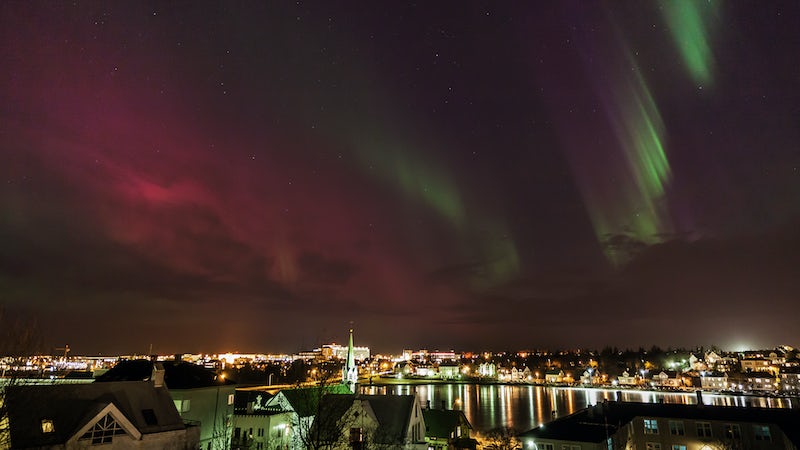 Northern Lights are also a common sight in the city, although light pollution can decrease their intensity. Photo: Snorri Þór Tryggvason.

What are the conditions/the best time of the day to see the northern lights?

According to the Science Web of the University of Iceland, the ideal timeframe to spot the northern lights is from 21 pm to 2 am.

Before you go out northern-lights hunting, make sure that the sky is clear. If it isn’t, you might want to a place where the weather forecast is better. You also have to make sure that the so-called aurora oval is over Iceland, you should follow the aurora forecast to see what the chance of seeing the northern lights are.

Light pollution can affect the visibility as well so if you’re staying in Reykjavik, I advise you to drive a few miles from the city lights. According to the Science Web, these destinations are ideal for gazing at the northern lights:

Some people actually catch their first glimpse of the Aurora Borealis on their way to Iceland – from the window of an airplane. The northern lights can be very intense en route from N-America to Iceland, especially when flying close to the magnetic pole.

Is it worth it to book a northern lights tour?

There are various options for northern lights tours in Iceland. Usually, these are bus tours that take you to sites where light pollution is minimum. Some of these tours invite guests to join the tour next day in case the northern lights aren’t visible.

For those who like guided tours and perhaps don’t have a rental car to drive outside the city, I think a northern lights tour could be a good idea. The guides are usually very knowledgeable about the Aurora Borealis and I assume they know the best spots to see them. I advise you to check out the northern lights forecast before you book a tour and if the chances are low, you might as well skip it altogether.

Some tours are “combo” tours, which means that you get to do something else ( see some major attractions , go kayaking or going on an ATV tour for example) while looking at the northern lights. These tours feature the northern lights kind of like a bonus; it's great if you see them during the tour but since northern lights-hunting isn’t the only goal, you won’t get as disappointed as if you join a tour that is solely focusing on the lights.

Tips on photographing the northern lights

It’s possible to shoot some out-of-this-world pics of the northern lights if you know the right technique. This article contains some great tips for aspiring photographers. 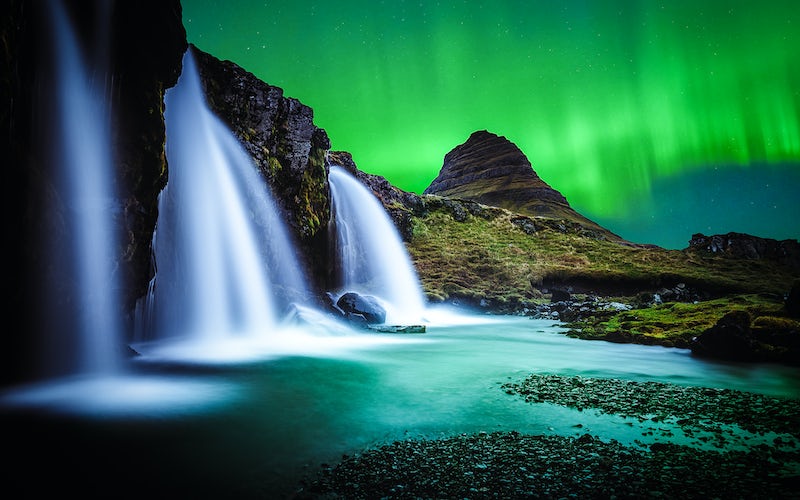 If you’re very ambitious, I recommend that you select a scenic place for northern lights-gazing. Kirkjufell mountain has inspired many photographers and if you search for photos of northern lights in Iceland, you’ll definitely see this mountain in the background of many photos. Here are a few places that in my opinion would look stunning on a photo with the dancing northern lights in the foreground:

If you want to find more local knowledge about Iceland, you should definitely check out Wonderguide.com, where you'll find everything you need for your dream trip.