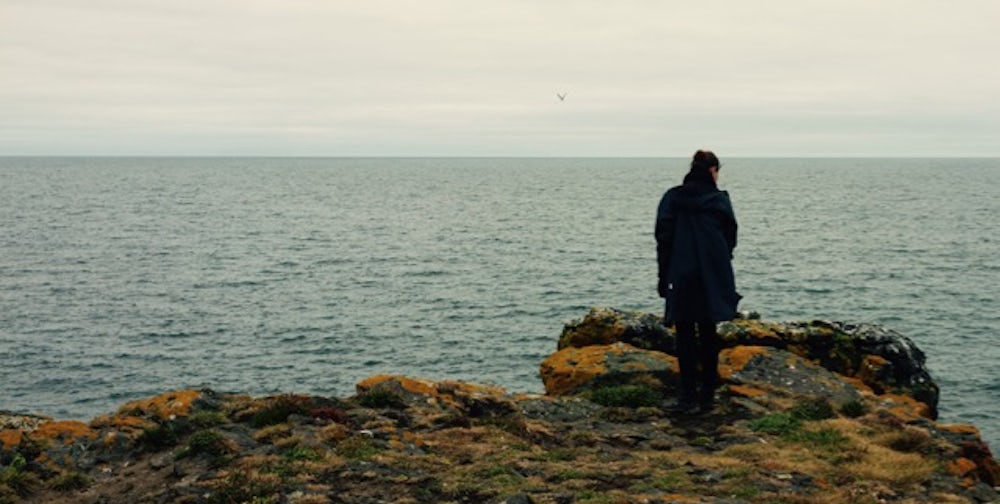 An Unconventional Arctic Getaway: A Day Trip to Grimsey Island

Grímsey is a remote arctic island off the northern shore of Iceland. I visited this fascinating place on a cold summer's day and I sensed immediately that this would be an unforgettable journey.

Grímsey is Iceland’s northernmost island, located around 25 mi (40 km) off the north coast of Iceland. The island is the only place in Iceland crossed by the Arctic Circle, aside from oceanic territories.

The island has been inhabited since the settlement of Iceland. The population has been decreasing for the past years and now there are less than 100 permanent residents on the island. A large majority of the islanders work in the fishing industry, others work in agriculture or the tourist industry.

Grímsey has never been a tourist attraction and I honestly don’t know many people that have actually been there. Despite that, I had been curious about this island since I was a child. Remote places tend to be attractive in a very unique way, perhaps it’s their remoteness that make them so fascinating. For this reason, and out of sheer curiosity, I decided to embark on a journey to Grímsey.

It’s possible to travel to Grímsey by flight or ferry. I chose the latter option, which is also much slower, as you might have guessed. The ferry ride takes roughly three hours and that meant I had to spend six hours on a ship during the day. I usually enjoy all kinds of transport, I like being on board of ships, trains and even airplanes, so I really didn’t mind spending six hours on a ferry.

The ferry departed from the harbour of Dalvík on a hazy morning. The weather was a bit of a disappointment; this was the first cloudy day on our trip to North Iceland. In a short while I changed my mind about the weather and became quite content with it – wouldn’t it just make the experience even more authentic? It’s an arctic island after all.

The ferry ride went by pretty quickly and by noon we arrived in Grímsey. We were greeted by our guide, Halla, who took us straight to the only restaurant in town. We had some soup, bread rolls and coffee, and then we hopped on Halla’s van and drove a bit around the island.

The first thing that struck me was a huge number of arctic terns. I’m used to seeing these birds all the time, but never in my life have I seen so many of them in one place. I’m actually pretty fond of arctic terns, despite their aggressiveness, but I instantly thought that the islanders must consider them a pest here. There were white droppings from them all over the place and you really couldn’t escape the piercing noise.

I asked Halla about how the islanders felt about the arctic terns and she replied that the locals were usually relieved when they fly south in the fall but they’re nevertheless always happy to see them again in the spring. 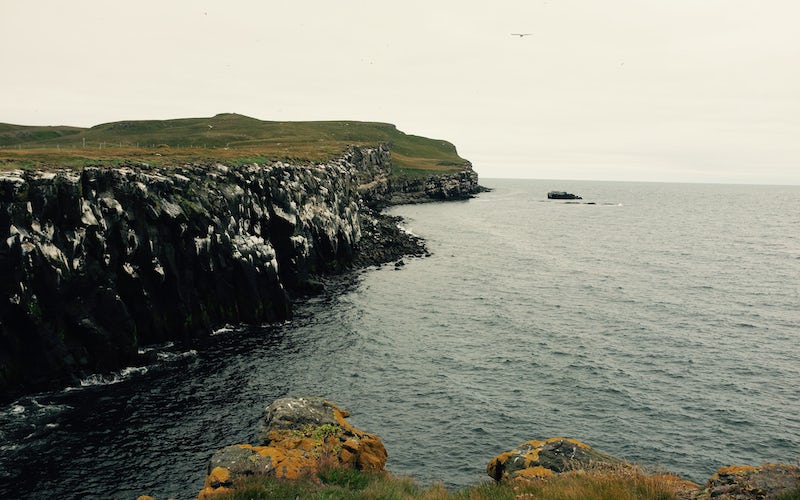 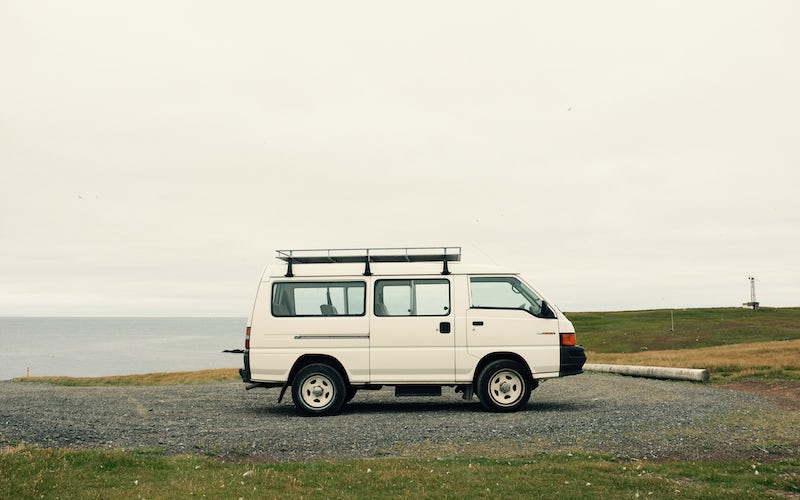 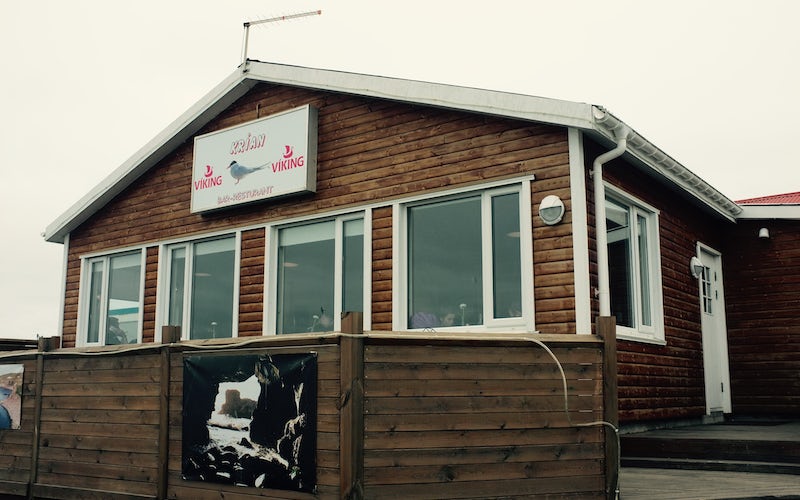 The island's only restaurant. Wonderguide/Nína.

We drove to the south coast first, where most of the islanders live. There were strikingly few houses on the island and some of those few had even been abandoned.

Halla told us that two of the abandoned houses had been bought by a couple from Reykjavik that were granted money from the government to renovate them, but they apparently neglected to finish the task. Some local islanders had offered to buy the houses from them but they refused. These houses were located near the south shore, where the largest population of arctic terns on the island resided. It felt as if the arctic terns had finally driven the last human inhabitants away – the territory was now entirely theirs.

We got out of the car by a lighthouse on the southernmost tip of the island. There were bird cliffs all around but the puffins, which can be found in large numbers on the island, had unfortunately left the island just the evening before.

According to Halla, the inhabitants of Grímsey do not depend much on calendars or clocks. Instead of working from 9 to 5 in weekdays, the fishermen of Grímsey work when there’s fish and rest when there is no fish or when the weather is bad. Nature is the boss and she decides the working hours. “The fishermen here do not mind working many days in a row, they know that they will get plenty of days off later,” Halla explained to us. 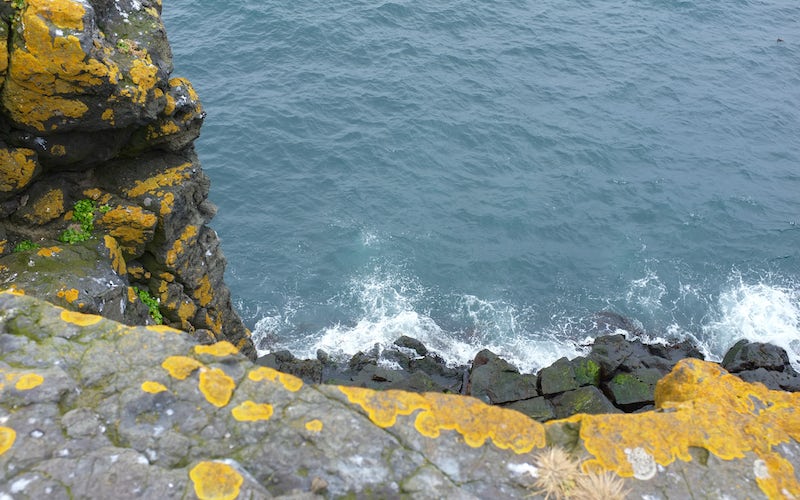 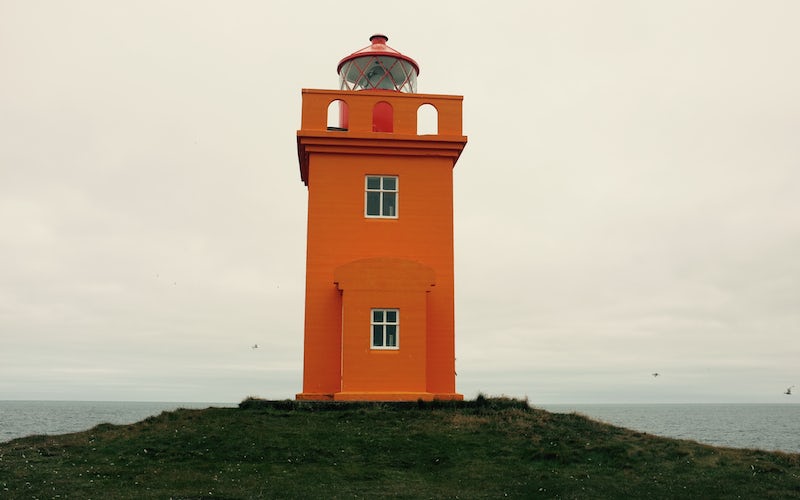 The lighthouse in Grímsey. Wonderguide/Nína. 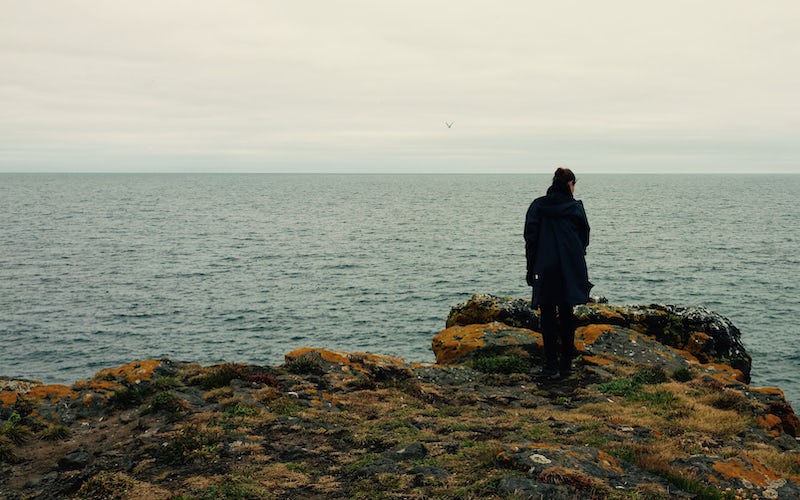 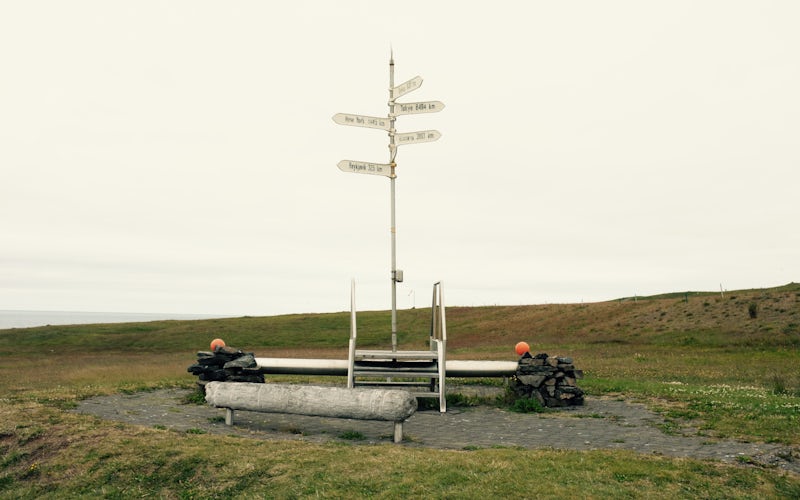 After exploring the southern shore of the island, we drove to the northern part. We parked by the airport and walked to the official “crossing” of the Arctic Circle.

Later we visited the smallest art gallery/café I’ve ever been to and had some traditional Icelandic waffles with rhubarb jam and cream. We chatted a bit more with Halla, who lives in Grímsey for the major part of the year. She wasn’t born on the island, but decided to move there after visiting for the first time. She told us that she absolutely loved living on the island and wasn’t caught up in the feeling that she was isolated from the rest of the world. 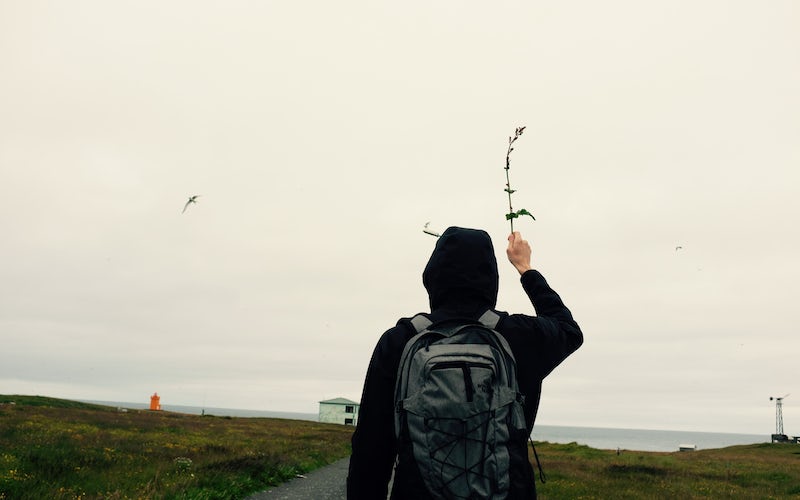 Arctic terns can be hostile. Here's how to keep them away. Wonderguide/Nína. 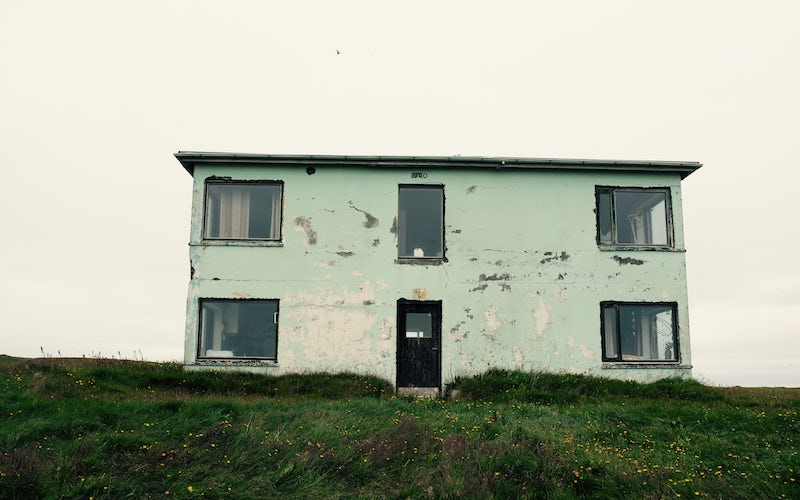 One of the abandoned houses. Wonderguide/Nína. 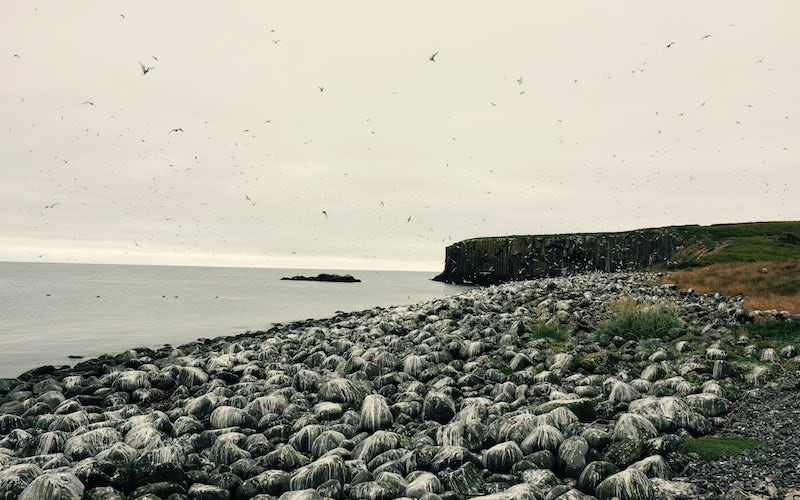 The arctic terns have left their marks on the rocks on the beach. Wonderguide/Nína.

I sensed a strong vibe of intimacy while observing the islanders communicate to each other – when you live in such a small community your neighbours inevitably become your family. We were greeted with a friendly smile wherever we went, and I felt welcome on the island from the moment I set foot on it. Halla claimed that the inhabitants of Grímsey were probably the most hospitable people in the world.

On the way back I was very eager to spot some whales but I had no luck. Instead I just gazed at the greyish fjord, happy that my curiosity finally led me to the fascinating Grímsey island. 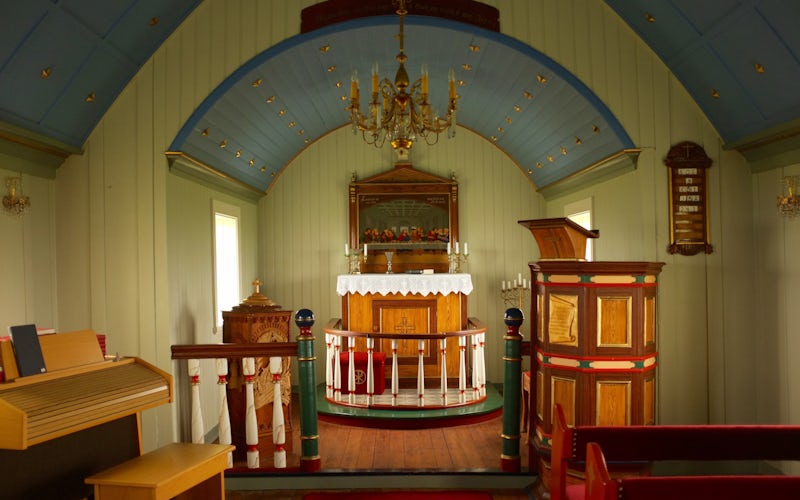 Inside the tiny church of Grímsey. A priest travels to the island four times a year. Wonderguide/Nína. 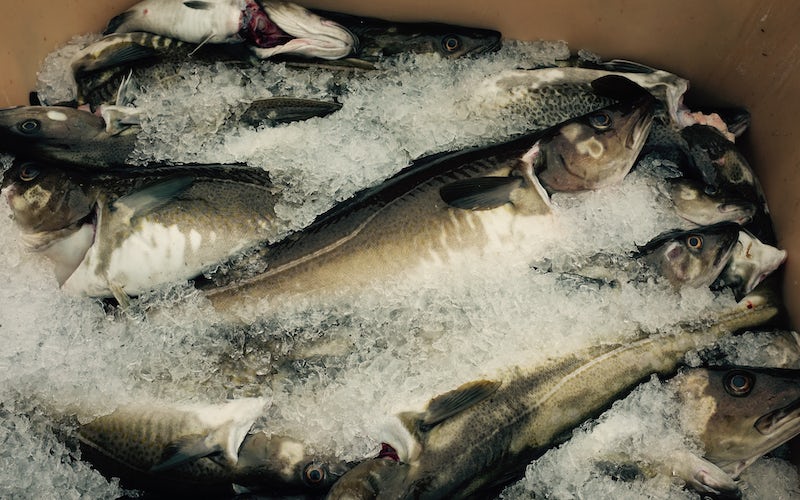 The catch of the day. Wonderguide/Nína. 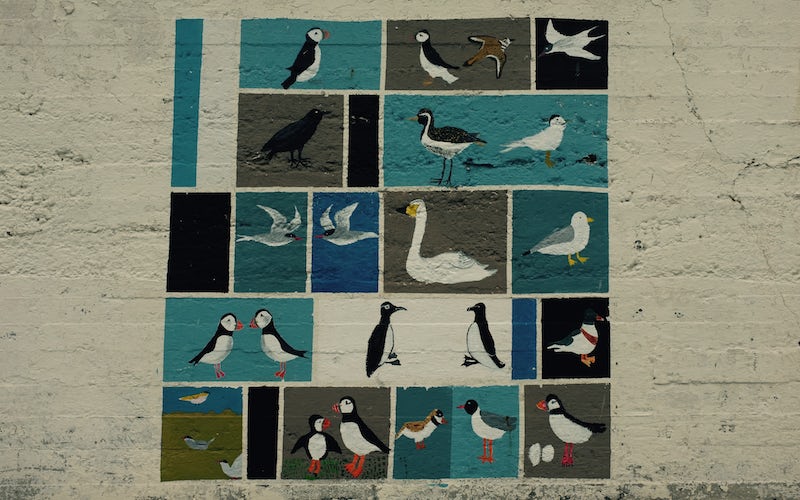 A homage to the birds of Grímsey. Wonderguide/Nína.

Where can I book guided tours on the island?
You can book a guided tour, just like I did, with two different companies. The company operating tours is called Arctic Trip, you can book a tour with them here.

Are there any activities on the island or do you just walk around and explore?
It's possible to go snorkling or diving on the island during the hotter months. I asked Halla about that and she said it was super cool; during the summer you see the puffin diving into the ocean all around you.

Is there a campsite on the island?
No, but I noticed that somebody had camped in the yard of the elementary school. I guess you have to ask for a permission before doing that.

Akureyri: Paradise of the North
Story