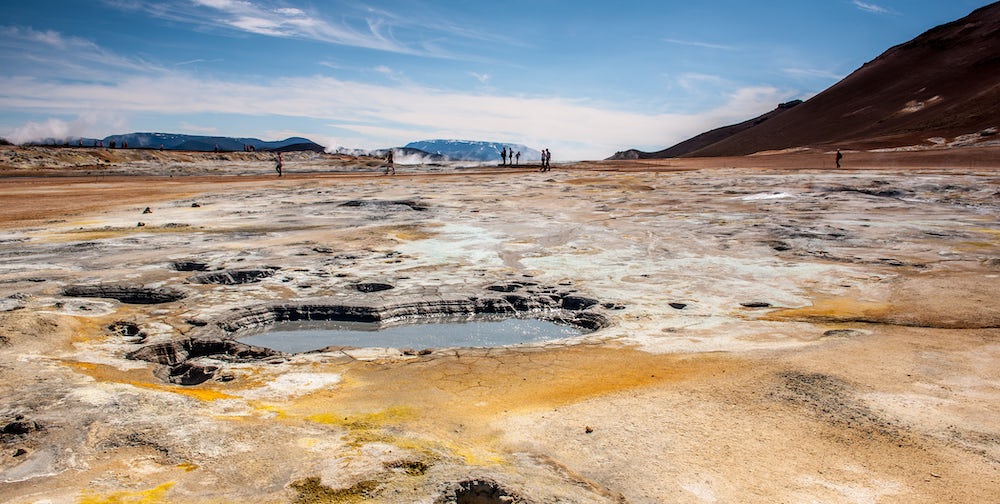 The 5 Best Things to do in Northern Vatnajökull National Park

The northern half of Vatnajökull National Park is an entirely different beast to its southern counterpart. Read on to discover the best things to do in this volcanic region.

Covering roughly 14% of Iceland, the National Park encompasses the Skaftafell region in the south, the Vatnajokull Glacier itself and the extensive desolate highland areas surrounding it, as well as Jökulsárgljúfur in the north. Where the southern half of Vatnajökull National Park is dominated by the glacier itself, the region stretching from its northern reaches towards Jökulsárgljúfur has instead only felt the effects of Vatnajökull; eruptions under the ice cap have sent powerful floods thundering down towards the coast, carving out immense canyons throughout the region. Couple that with active volcanoes wreaking havoc for millennia, and the result is some of the most otherworldly landscapes and unique volcanic features in all of Iceland.

Best accessed east of Akureyri or from the north-eastern part of the country, exploring the extensive areas that make up the northern end of Vatnajökull National Park could easily take up a whole trip. I’ve narrowed it down to the 5 best things to do to make the most of your time in the area.

One of the most popular destinations in all North Iceland, Mývatn is a beautiful lake with small islands dotted throughout its waters. The diversity on offer around the lake is what draws people to this area; lava fields stretch away towards volcanic mountains, hot springs bubble underneath the ground, and craters formed eons ago dot the landscape. The small village of Reykjahlíð lies on its north-eastern shore, offering a selection of services for the farms sprinkled around the lake.

For those not on a day tour of the area, it’s quite an easy self-drive to do. Dimmuborgir is one of the most impressive a lava field on the eastern side of the lake, a labyrinth of towering lava pillars unlike anything else in the world. Further north is where you’ll find the popular Grjótagjá, a hot spring in an underground cave made famous as a Game of Thrones shooting location. Close to the area is the Mývatn Nature Baths as well; the north’s answer to the Blue Lagoon, a magical swimming experience. 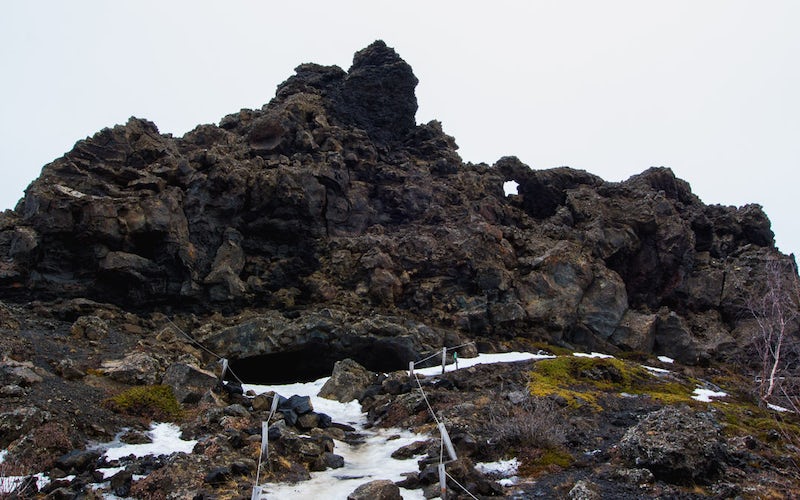 2. Witness the Power of Dettifoss

The most powerful waterfall in Europe, Dettifoss is one of the most impressive sights in Iceland and jewel of Vatnajökull National Park. The roar of the falls accompanies you as you trek towards the Jökulsárgljúfur canyon through an area of stark sand and rocks, washed there from previous glacial floods. Just over a small rise lies the waterfall, crashing over the sheer cliffs with amazing force, disappearing into a shroud of mist in the canyon below. 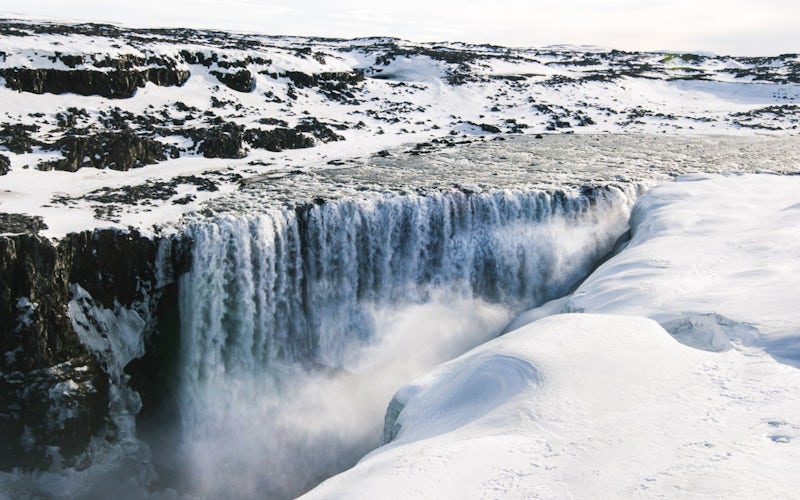 The canyon was created by a giant glacial flood, known as a jökulhlaup. A volcanic eruption underneath Vatnajökull sent an immense amount of water rushing down towards the north coast with such force that it pressed down on the ground and carved out the canyon. Join a day tour to get there without any trouble, as the road leading towards the falls is often closed due to snow. For those that make their way to the waterfall themselves, it opens a wide range of walking tracks; just south of Dettifoss you’ll find another waterfall, Selfoss, and further north is Hafragilsfoss.

Read: A Winter Trip to Dettifoss

3. Visit the Unique and Beautiful Ásbyrgi

If you hike far enough north from Dettifoss (about 6 hours), you’ll eventually come to Ásbyrgi canyon, an incredibly unique natural sight, even in Iceland where unique is the norm. A large horseshoe-shaped canyon with walls that reach up 100 metres at their tallest, Ásbyrgi is one of the few places in Iceland where you can find a small forest as well, nestled at its base. The verdant area is said to be the capital of the Hidden Folk, and legend also tells a story about its formation; Odin’s horse, Sleipnir, once stepped down from the heavens onto the Earth and created the canyon. However, it’s more likely that it was created by another glacial flood.

Hiking up along the walls of the canyon is a very rewarding experience but can take a long while to reach the top of the horseshoe bend. The views will always be worth it though. 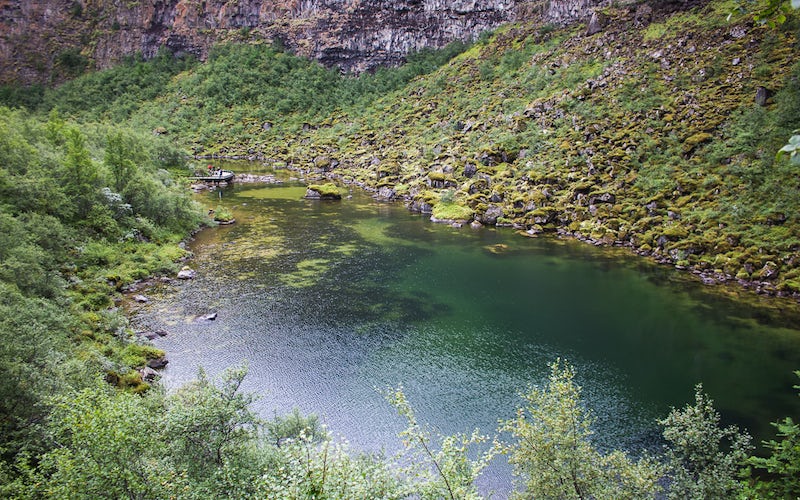 4. Enjoy a Highlands Adventure to Askja/Víti

The volcanic highlands north of the glacier Vatnajökull have been shaped over millennia by violent eruptions, earthquakes, and geothermal energy, the dramatic landscapes so out of this world that they once served as a training area for Apollo astronauts before their lunar mission. Askja is a volcano in the Dyngjufjöll mountains, known because of the glittering lake right next to it formed when a magma chamber collapsed. It’s also become popular recently thanks to Víti, a crater right next to the volcano that has filled with a milky blue geothermal water, a perfect spot to soak whilst surrounded by some of the most unique natural surroundings on offer in Iceland, and the world.

Accessed only by F-Roads, getting to this location yourself is quite difficult. If you are going to attempt it, be prepared to cross quite a few rivers, for which you’ll need a 4x4. It’s far easier to book a tour in a super jeep and leave the river crossings up to the professionals. Check them out here. 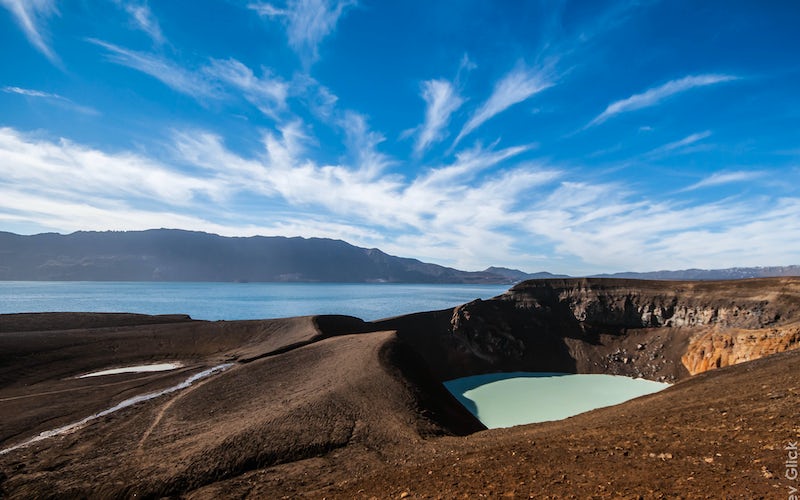 Walk Among Lava in the Krafla Volcanic Caldera

The Krafla volcanic caldera lies just north of Lake Myvatn – perched on the edge of the Eurasian and American tectonic planets, this active volcanic area last erupted in the 1970s. The beauty of the area lies in the Leirhnjúkur lava field, where walking paths meander throughout the lava field, still smouldering in some places. A wide spectrum of colours are on show as the chemicals combine and react in the ground next to the wonderfully weird formations of lava rocks.

A little bit further up the road is another crater called Víti – also filled with a milky blue water, but not ideal for swimming as it’s not geothermally heated.

For those interested, you can walk through Leirhnjúkur with a guide and learn all about the many eruptions that have taken place in the area. 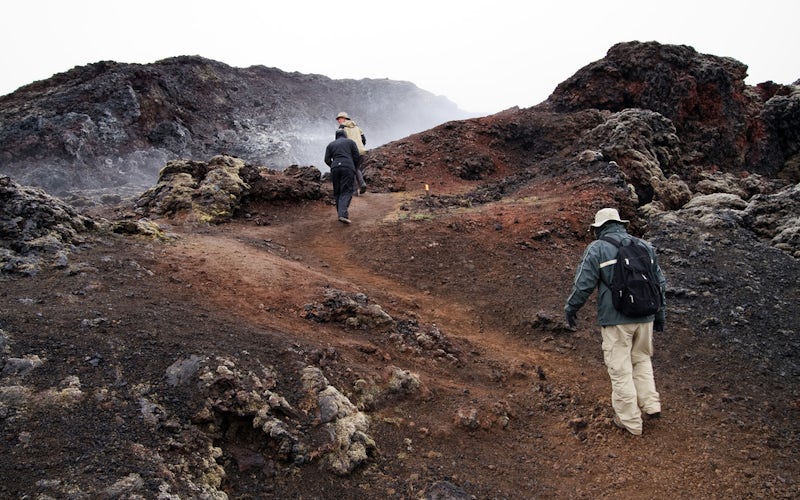