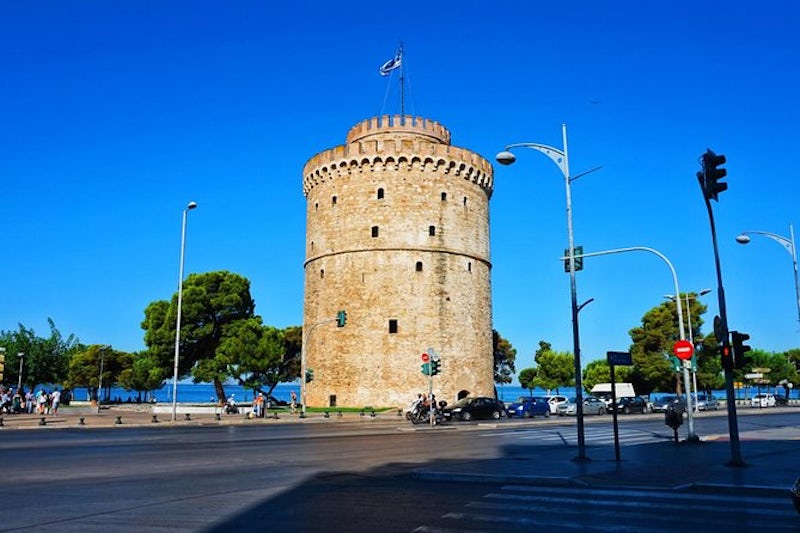 Take this private historic walking tour of Thessaloniki & see UNESCO-certified Byzantine churches, admire the White Tower, and tour the Crypt of Saint Dimitrios in the company of your archaeologist guide.

Stop at: White Tower of Thessaloniki

The White Tower of Thessaloniki is a monument and museum on the waterfront of the city of Thessaloniki, capital of the region of Macedonia in northern Greece. The present tower replaced an old Byzantine fortification, known to have been mentioned around the 12th century, that the Ottoman Empire reconstructed to fortify the city's harbor sometime after Sultan Murad II captured Thessaloniki in 1430. The tower became a notorious prison and scene of mass executions during the period of Ottoman rule.

The White Tower was substantially remodeled, and its exterior was whitewashed after Greece gained control of the city in 1912. It has been adopted as the symbol of the city.

Stop at: Church of Agios Dimitrios

The Church of Saint Demetrius is the main sanctuary dedicated to Saint Demetrius, the patron saint of Thessaloniki, dating from a time when it was the second largest city of the Byzantine Empire. It has been part of the site Palaeochristian and Byzantine Monuments of Thessaloniki on the list of World Heritage Sites by UNESCO since 1988.

Built in 306 A.D. by the Romans, Rotunda is one of the oldest religious sites of the city.

Going back to the late 3rd century A.D., after a number of long devastating wars, the Romans decided to divide the Empire into 4 regions, each with its own provinces, thus leading to the creation of a new form of leadership, the Tetrarchy.

Stop at: Arch of Galerius

Galerius Arch and the Rotunda were basic elements of the palatial complex. Many archaeologists believe it was initially used as a Roman temple. The dimensions of the main structure are quite impressive.

Stop at: The Greek Agora and Roman Forum

The Roman Forum of Thessaloniki is the ancient Roman-era forum of the city, located at the upper side of Aristotelous Square. It is a large two-terraced forum featuring two-storey stoas, dug up by accident in the 1960s.