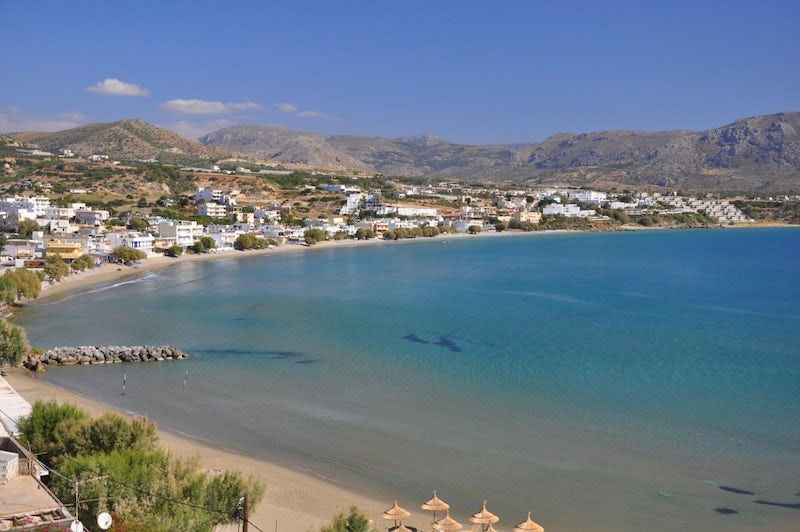 Private transfer from Heraklion Airport (HER) to Makrygialos

Makry Gialos (Greek: Μακρύ Γιαλός) is a former municipality in Lasithi, Crete, Greece, with a population 3,894 in 2011. It is located on the south- east coast of Crete. Since the 2011 local government reform it is part of the municipality Ierapetra, of which it is a municipal unit.[2] The municipal unit has an area of 159.229 km2 (61.479 sq mi).[3] The seat of the municipality was in Koutsouras, 22 kilometers east of Ierapetra. It was established in 1998 when the communities of Schinokapsala, Orino, Stavrochori, Chrisopigi, Aghios Stefanos, Pefki, Lithines and Pervolakia amalgamated into one municipality (Δήμος).

The name Makry Gialos - or, alternatively, Makry-Gialos , Makrygialos , Makriyialos , or Makrigialos - is also specifically given both to a village and tourist centre on the coast within the municipality, and to the nearby archaeological site of an ancient Minoan country house.

Makry Gialos region lies on the southeast coast of Crete island, Greece. The area faces the Libyan Sea ( part of Mediterranean Sea, which separates Crete from North Africa). The backdrop of the area is mountainous and made up primarily of granite. From the mountains there are small valleys and gorges leading down to the coast. On the higher slopes there is an abundance of Walnut, Apple, Pear and Olive trees. On the lower slopes the main industry is farming and olive trees.

Down below along the main coastal road, farming can also be found along with the greenhouses, in which most of the produce grown is tomatoes, cucumbers, peppers, aubergines and bananas, which grow all year round. The sun and the rich soil give more taste to the fruit and vegetables, and the region has won the gold medal for the extra virgin olive oil (SITIA 0.03).[citation needed] The famous PDO SITIA xygalo cheese is also produced in the area of Sitia province. The morphology of the land presents beautiful landscapes, varying from place to place. Places with pine forest and wild oak trees, with granite nuggets and sharp rocks. Places with smooth hillsides with low bush land or orchards, and olive groves. The coastline that runs from Galini to Kalo Nero, is etched with rocky inlets, small coves and long sweeping stretches of sand and pebble beaches. The Bay of Makry Gialos boasts the longest shallow sandy beach of East Crete. Other beaches are Diaskari, Langada, Amoudi, Mavros Kolimbos, Galini, Koutsouras; some of them are commercial beaches and some are deserted. Between the mountains there are dried up riverbeds, which are flowing down to the sea during the winter months.

Bottled water
All Fees and Taxes