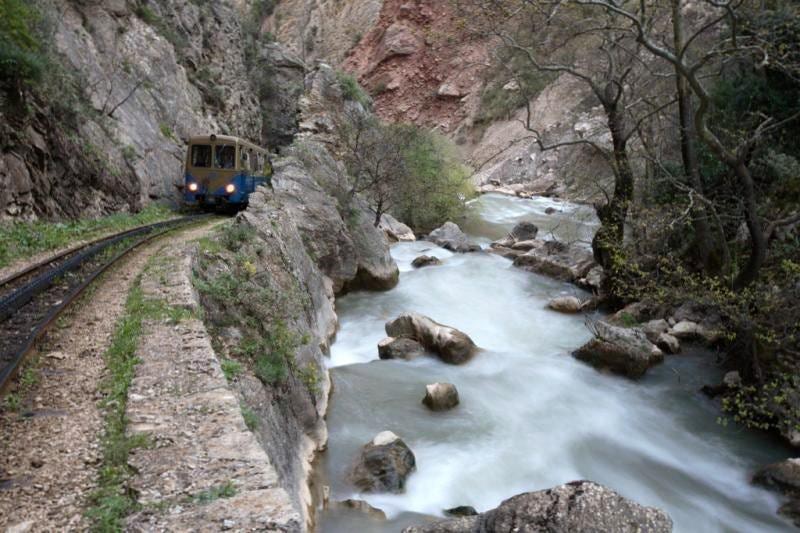 Enjoy a scenic drive through the mountains and villages of Kalavrita, while also getting the chance to explore notable landmarks like the Mega Spileo & "Holy Lavra" Monasteries!

Kalavrita
Kalavrita is a town and a municipality in the mountainous east-central part of the regional unit of Achaea, Greece. The town is located on the right bank of the river Vouraikos,24 km south of Aigio, 40km southeast of Patras and 62km northwest of Tripoli. Notable mountains in the municipality are Mount Erymonthos in the west and Aroania or Chelmos in the south-east.
Kalavrita is the southern terminus of the Diakopto-Kalavrita Rack Railway built by Italian engineers between 1885 & 1895. Today Kalavrita, preserving its historical significance as well as natural beauty, is a very popular and important destination. When you reach Kalavrita, you will realize the reason behind the towns well-chosen name, since 'Kala Vryta' literally translates to 'Grand Waters'. And there is certainly an abundance of that.

Cave of the Lakes
In Kastria, in the municipal unit of Lefkas, there is the famous cave system Spilaio ton Limnon ('Cave of the Lakes')which is filled with beautiful lakes and strange rock formations. It was formally known as Troupisio. The cave is an old subterranean river consisting of three levels. During the winter when the snow melts it is transformed into a flowing river with waterfalls. During the summer it dries up leaving behind 13 lakes.

Diakofto-Kalavrita Railway
Is a historic rack railway in Greece located on the northern Peloponnese.It runs 22 km from Diakofto through the Vouraikos Gorge and the old Mega Spilaion Monastery and up to Kalavrita.An unforgettable journey through the evergreen and incredibly beautiful nature the Diakofto-Kalavrita Rack Railway is a memorable tourist attraction. It's a train that can reach high altitudes and operate on steep grades through territories of unique interest and spectacular views.

The railway network is toothed on steep gradients. The classification of the railway as 'Rack' or 'Cog' comes from the cogwheels these trains use that mesh in the rack rail, helping them to operate on steep grades. The train features special pinions inside the wheels, which are used when the steep gradient increases and latch on the rail, both during the ascent and descent.

Holy Lavra
Agia Lavra is a monastery near Kalavrita. It was built in 961 AD on Chelmos Mountain, at an altitude of 961 meters and can be described as one of the oldest monasteries in the Peloponnese. Built in the 10th century, it was burnt to the ground in 1585 by the Turks. Rebuilt in 1600, it was burnt again in 1715 and in 1826 by the armies of Ibrahim Pasha of Egypt. In 1850 after the rebirth of modern Greece, the building was completely rebuilt. The monastery was completely burned down by the German forces in 194. It is famously linked with the Greek War of Independence since it was here that the call for 'Eleftheria I Thanatos'('Freedom or Death')was first heard on the 25th March 1821, launching the revolution against the Ottoman Empire.

To this day the vestments of Germanos, documents, books, icons, the Gospel of Tsarina Catherine II of Russia, sacred vessels, crosses, etc are preserved in the Monastery's museum, along with the holy relics of St.Alexios, given by Byzantine emperor Manuel II Palaeologus on 1398. Pieces of embroidery, made with gold or silver threads woven in pure silk materials in Smyrna and Constantinople, are also possessions of the Monastery and they date from the 16th century.

On the hill opposite, a monument to the heroes of the Revolution of 1821 looks down upon the monastery.

Mega Spileo Monastery
According to a lot of people, it is the oldest Monastery of Greece and one of the most impressive Christian Orthodox pilgrimages. It is 10 km out of the town of Kalavrita. It took its name (Spileo=cave) from the cave where the icon of Virgin Mary was found. The Monastery of Mega Spileo was built in 362 AC by the brother monks Simeon and Theodoros who were from Thessaloniki. Each of them separately saw a vision and they were both ordered to go from Jerusalem to Achaia and find the icon of the Virgin Mary that was made of mastic and wax by Lucas the Evangelist. After wandering, the two brothers met a young shepherdess, Efrosini, who led them to the cave where the icon of the Virgin Mary was.

With great piety, the two monks took the icon out of the cave and cleaned the sacred place by removing the plants. When they burnt the branches, a dragon jumped violently towards the exit of the cave and it was killed by thunderbolts. In order to keep this miracle alive, a lot of reconstructions have taken place. Also, the dragon's bones were kept until lately.

Allot of other pilgrims started to come to this region. Also, a lot of cells were built and gradually the Monastery started to flourish and it became a center of Orthodoxy and Hellenism through centuries. It played an important role in the Greek Revolution of 1821 and it was an inexpugnable fortress for its conquerors. The brave heroic answer of its abbot, Damaskinos in June 1827 to Ibrahim is known:" It's impossible for us to bow before you. If you come here to fight us and win, you won't do anything bad because you will just beat priests. However, if you lose, you will be ashamed!"