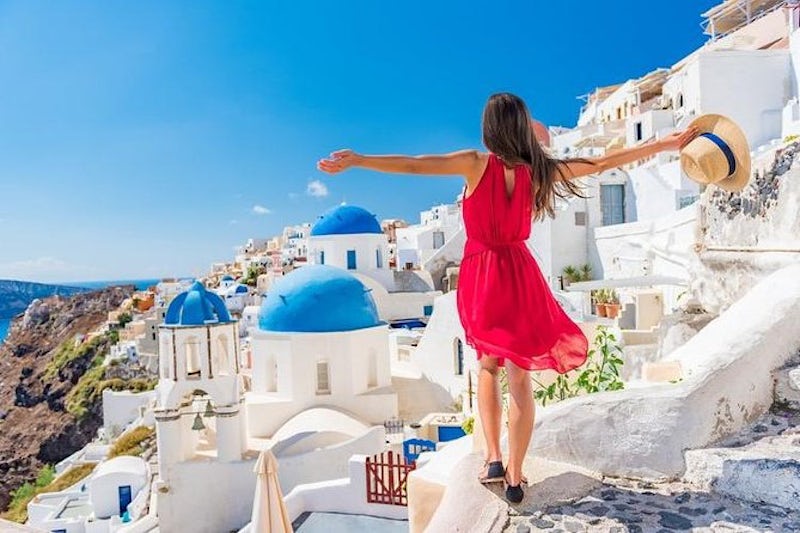 Spend the day sightseeing on the gorgeous Aegean island of Santorini, explore the ancient settlement of Akrotiri, stroll down the beautiful whitewashed streets of Oia, and finish the day with an unforgettable sunset.

Following a pick-up from your hotel, transfer in an air-conditioned coach to the archaeological site of Akrotiri. Explore an ancient city that was frozen in time after a volcanic eruption 3600 years ago. Step inside with your guide, and learn about the Minoan city, before the devastating event occurred.

Gaze in awe at the ruins of multi-storied buildings that date back to the 16th century, and admire the intricately designed drainage system that hints at a talented civilization far more advanced than its time suggests. Stroll down the main street, lined with old stores and warehouses of the ancient city. Learn about traditional ceramic artifacts, such as pithoi (earthenware jugs).

Continue towards Perissa Beach, and enjoy some free time to have lunch, and relax at one of the longest black sand beaches in the Cyclades and the most popular beach of Santorini.

Stop at: Windmills of Emporio

Our next stop will be at Emporio Village, where you can explore one of the oldest and most authentic traditional villages of Santorini, built like a small labyrinth, and visit its 15th-century medieval fortress.

After that short stop we continue towards Santorini Winery, where you can taste Santorini’s distinctive wines, and learn about one of the oldest vineyards in Europe while admiring the spectacular view of the volcano.

Stop at: Monastery of Profitis Ilias

Profitis Ilias Mountain will be our next stop, where you will finish your tour with a short stop at the highest peak of Santorini (567 meters) to admire the striking panoramic view of the entire island.

Stop at: Sunset in Oia

Meet your guide again in the early evening for the transfer to Oia, a quintessential Greek village that’s known for its sugar cube houses and blue-domed churches. Join the legions who flock to Oia to watch the sunset, and stroll down streets nestled into the side of the cliffs overlooking the spectacular caldera.

Follow your guide to the ruins of a Venetian castle, known as the Kastro of Oia, and gaze down from the village and the caldera to the sea. Return to the coach for the transfer back to your hotel.