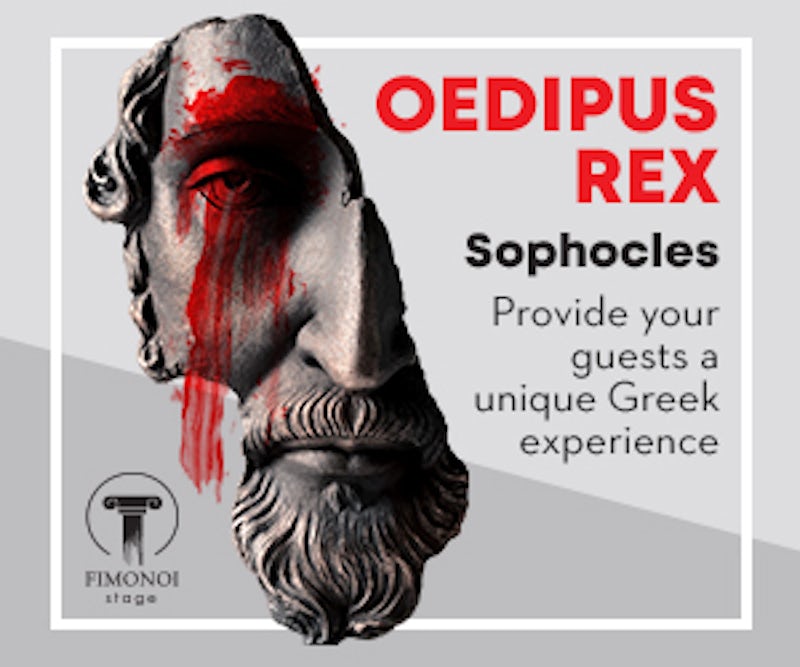 For the first time, in the heart of Athens, enjoy a theatrical performance of “Ancient Drama” with English and French overtitles.

A unique experience that one may not be able to attend anywhere else in the world, but in the place where Drama and Theatre were born.

Oedipus Rex has been an archetypal play in the world classic literature for nearly 2,500 years. Long considered the greatest Greek tragedy, it has a sympathetic protagonist, a crushing climax, sublime poetry, and a wealth of meaningful themes. The play remains on the very short list of incomparably and undeniably great world literature masterpieces and is taught all over the world.

The production runs from every Wednesday at 20:00 at Athinais Cultural Center.
Running time: 105 minutes (incl. a 15 minute intermission)

Shortly after Oedipus was born, his father, King Laius of Thebes, learned from an oracle that he, Laius, was doomed to perish by the hand of his own son, and so ordered his wife Jocasta to kill the infant. However, neither she nor her servant could bring themselves to kill him and he was abandoned to starvation. There he was found and brought up by a shepherd, before being taken in and raised in the court of the childless King Polybus of Corinth as if he had been his own son.

Undettered by rumors that he was not the biological son of the king, Oedipus consulted an oracle who foretold that he would marry his own mother and kill his own father. Desperate to avoid this fate, and believing Polybus and Merope to be his true parents, Oedipus left Corinth. On the road to Thebes, he met Laius, his real father, and, unaware of each other’s true identities, they quarreled and Oedipus pride led him to murder Laius, fulfilling part of the oracle’s prophecy.

Later, he solved the riddle of the Sphinx and his reward was the hand of Queen Jocasta (his biological mother) and the crown of the city of Thebes. The prophecy was thus fulfilled, although none of the main characters were aware of it at this point.

The elements of Greek Tragedy

Life and death, destined love, war, the futility of human nature, the battle of humans to take their destiny in their own hands, uncertainty of the inevitable truths of life. Those were the exact themes in Greek Tragedy, as drama was well rooted in the world realities of the time and was created after human character.

In Greek mythology, human life was in the hands of gods. Fate was pre-decided and could not be escaped at any cost. Oedipus and so many others, tried very hard to deceive the destiny, but the cage of tragic and cruel fate was very much tricky. In spite of all preventions taken by them, they were led to the final destiny which was pre-decided.

This is why Oedipus Rex is considered an unsurpassed classic of antiquity and a legend that lived on for 2500 years. A life drama that could be equally valid and reflect a contemporary human soul and theatrical patterns.