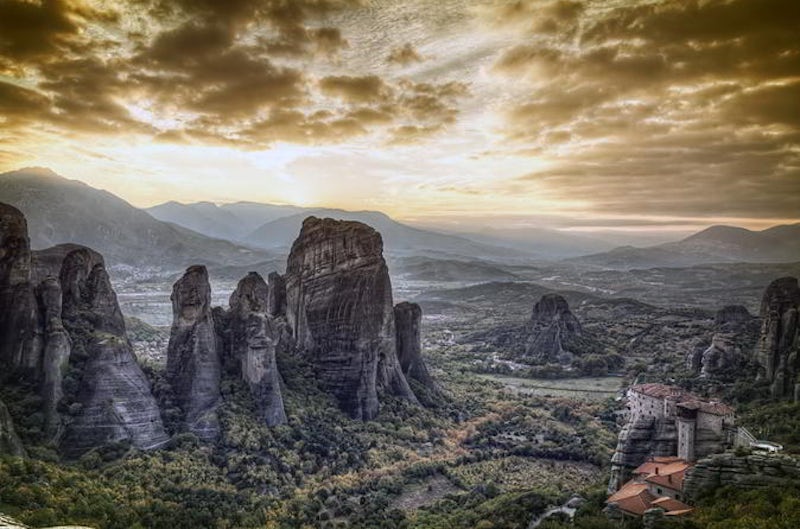 Enjoy a religious/biblical and classical private tour across glorious Greece, checking out famous sites like ancient Olympia and Thermopylae.

Our first stop is at historical Thermopylae! Paying tribute to King Leonidas of Sparta and his 300 Spartan warriors we will visit the amazing monument of his statue which is captivating!

We will visit Thermopylae's museum with the reenactment of the battle of Thermopylae in 3D and have the chance to gaze upon hot springs.

Next stop breathtaking Meteora! Meteora is considered one of the most beautiful areas of mainland Greece and its hanging monasteries are one of the country's most unique attractions.

The monasteries are perched on top of towers of sandstone, which for centuries provided totally inaccessible retreats for the monks. They are built on top of rock towers and they provide fantastic views over the plain.

The Meteora Monasteries themselves, besides providing incredible views are full of religious treasures, wall paintings, icons and libraries rich in old manuscripts. Everyday, innumerable visitors gather here from all four corners of the world to meditate and pray. The fascinating landscape was used when filming the Bond film “For Your Eyes Only” (Holy Trinity Monastery).

You will be delighted in the play of light on the rocks and their changing moods. On sunny mornings the red roof tiles of the monasteries glisten in sharp contrast to the weather-stained grayness of the rocks while the late afternoon sun bathes the landscape with a golden glow.

At the foot of Mount Parnassos, lies the Pan-Hellenic sanctuary of Delphi , which was the most famous oracle of ancient Greece. Delphi was regarded as the "navel" of the world. According to mythology, it is here that the two eagles sent out by Zeus to find the navel of the world met. Delphi was for many centuries the cultural and religious centre of the Hellenic world and seat of the Pythian Games, the second most important games in Greece after the Olympics, which were held every four years.

Delphi is the one of the most important archaeological sites in Greece and an Unesco’s World Heritage monument.
In this part of the tour we will visit all the sites in Delphi. We will pass by Castalia Spring, visit the archaeological site and see the Theatre, the Athenian Treasury, the Temple of Apollo famous for its oracle Pythia, the Navel of the Earth.

We will visit the Museum of Delphi, with its spectacular collection of artifacts, including the Naxian Sphinx, the unique bronze Charioteer and the Statue of Antinoos.

Ancient Olympia in Greece was the site of the ancient Olympic Games, which were celebrated every four years by the Greeks.
The Archaeological Museum of Olympia is one of the most important museums in Greece. The museum's exhibition contains amazing findings such as sculptures from the Temple of Zeus, Hermes of Praxiteles and the Nike of Paeonius.

In the archeological site, you will see the gymnasium, the palaestra, the Philipeion, the workshop of Phidias where the gold and ivory statue of Zeus was built, the temples of Zeus, the temple of Hera, the altar where the Olympic torch is lit for the modern Olympic games and the remarkable ancient stadium.

We will explore the incredible archaeological site of Ancient Corinth with the fabulous museum, courtyard, temple of Apollo, fountain of Glauke, Sacred Spring, Peirene, Asklepieion, Odeion, Bema, Agora and much more.

After your shopping time and if you wish refreshments again you will be driven to the port of Kechries tracing the footsteps of St. Paul to the East.

As we drive up the monolithic rock we will be captivated by the breathtaking views of both gulfs, the Isthmus canal, Gerania mountain and surrounding beauty (1883 ft/574 m). Being the home of Pegasus (the winged horse) you will also discover the temple of Aphrodite and the Upper Pirene spring.

Ancient Diolkos where you discover and explore the ancient passage from the Corinthian to Saronic gulf and the subducting bridge. Here you can enjoy a coffee or snack at a wonderful cafe while you admire the views and wait for boats to pass through the canal.

Isthmus/Corinth canal which separates the Peloponnese from the Greek mainland where you will appreciate the engineering and incredible views of the Corinthian and Saronic gulfs. Here you have the opportunity to experience the ultimate adrenaline rush with Zulu Bungy diving off from the bridge into the narrow Isthmus of Corinth (255.9 ft/78 m ).