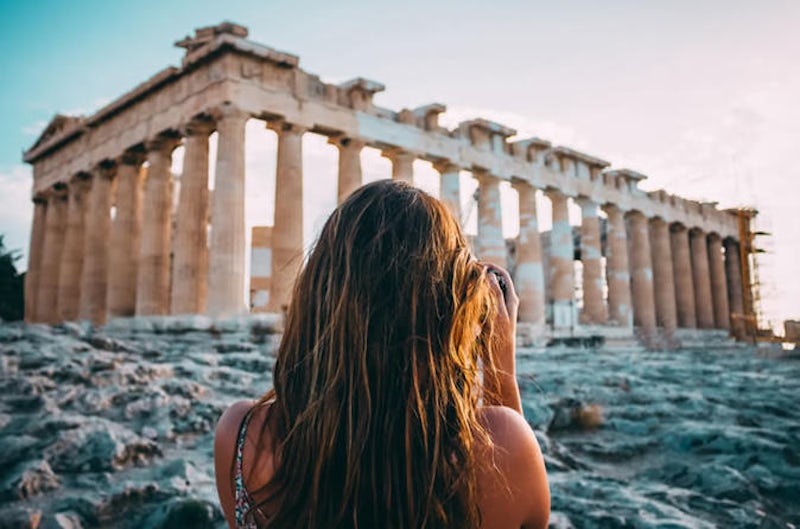 Our first stop is at historical Thermopylae! Paying tribute to King Leonidas of Sparta and his 300 Spartan warriors we will visit the amazing monument of his statue which is captivating!

We will visit Thermopylae's museum with the reenactment of the battle of Thermopylae in 3D and have the chance to gaze upon hot springs.

Next stop breathtaking Meteora! Meteora is considered one of the most beautiful areas of mainland Greece and its hanging monasteries are one of the country 's most unique attractions.

The monasteries are perched on top of towers of sandstone, which for centuries provided totally inaccessible retreats for the monks. They are built on top of rock towers and they provide fantastic views over the plain.

The Meteora Monasteries themselves, besides providing incredible views are full of religious treasures, wall paintings, icons and libraries rich in old manuscripts. Every day, innumerable visitors gather here from all four corners of the world to meditate and pray. The fascinating landscape was used when filming the Bond film “For Your Eyes Only” (Holy Trinity Monastery).

You will be delighted in the play of light on the rocks and their changing moods. On sunny mornings the red roof tiles of the monasteries glisten in sharp contrast to the weather-stained grayness of the rocks while the late afternoon sun bathes the landscape with a golden glow.

At the foot of Mount Parnassos, lies the Pan-Hellenic sanctuary of Delphi , which was the most famous oracle of ancient Greece. Delphi was regarded as the "navel" of the world. According to mythology, it is here that the two eagles sent out by Zeus to find the navel of the world met. Delphi was for many centuries the cultural and religious center of the Hellenic world and seat of the Pythian Games, the second most important games in Greece after the Olympics, which were held every four years.

Delphi is one of the most important archaeological sites in Greece and an Unesco’s World Heritage monument.

In this part of the tour, we will visit all the sites in Delphi. We will pass by Castalia Spring, visit the archaeological site and see the Theatre, the Athenian Treasury, the Temple of Apollo famous for its oracle Pythia, the Navel of the Earth.

We will visit the Museum of Delphi, with its spectacular collection of artifacts, including the Naxian Sphinx, the unique bronze Charioteer and the Statue of Antinoos.

Ancient Olympia in Greece was the site of the ancient Olympic Games, which were celebrated every four years by the Greeks.
The Archaeological Museum of Olympia is one of the most important museums in Greece. The museum's exhibition contains amazing findings such as sculptures from the Temple of Zeus, Hermes of Praxiteles and the Nike of Paeonius.

An ideal getaway featuring superb architecture and cobbled streets is the medieval town of MONEMVASIA!

Feel the 'sense of mystery' with the dimly lit alleyways as you stroll amid the mansions and Byzantine churches. Discover the Christos Elkomenos Church featuring the heavily guarded icon of the Crucifixion. The Ritsos family residence together with a total of 40 churches will captivate you.

Monemvasia's uniqueness and its fairytale atmosphere is awaiting you!

Visiting the Mani peninsula you will discover AEROPOLIS named after Ares, the God of war! The town is of great importance to Greece as it was here that the War of Independence against the 400 years of Ottoman occupation began!

The incredible DIROS CAVES are not to be missed! Start your journey at an underground lake where boats will be waiting for you. Caverns and tunnels, which are eerily lit and adorned with stalactites and stalagmites are overwhelmingly impressive!

Discover LIMENI, a picturesque port of Aeropoli! Enjoy the tavernas, restaurants, cafes, bars and boutique hotels right next to the sea and refresh yourselves by swimming in fabulous blue water!

Mycenae, the kingdom of Agamemnon is a World Heritage UNESCO Site discovered by H. Schliemann. According to the epics of Homer, the expedition to Troy started from here.

Combining mythology, ancient temples, an ancient stadium, and an incredible museum, Nemea is not to be missed. Taste victory with the goddess Nike by your side as you emerge through the crypt to the ancient stadium.

Arguably Greece's most important red wine appellation located in the Peloponnese is Nemea. A mythical land where the legendary Agiorgitiko wine is born. Live a unique experience tasting wines in some of the most well known Greek wineries reminding you of the Napa Valley of California.

We will explore the incredible archaeological site of Ancient Corinth with the fabulous museum, courtyard, the temple of Apollo, the fountain of Glauke, Sacred Spring, Peirene, Asklepieion, Odeion, Bema, Agora and much more.

After your shopping time and if you wish refreshments again you will be driven to the port of Kechries tracing the footsteps of St. Paul to the East.

As we drive up the monolithic rock we will be captivated by the breathtaking views of both gulfs, the Isthmus canal, Gerania mountain and surrounding beauty (1883 ft/574 m). Being the home of Pegasus (the winged horse) you will also discover the temple of Aphrodite and the Upper Pirene spring.

Ancient Diolkos where you discover and explore the ancient passage from the Corinthian to Saronic Gulf and the subducting bridge. Here you can enjoy a coffee or snack at a wonderful cafe while you admire the views and wait for boats to pass through the canal.

Isthmus/Corinth canal which separates the Peloponnese from the Greek mainland where you will appreciate the engineering and incredible views of the Corinthian and Saronic Gulfs. Here you have the opportunity to experience an ultimate adrenaline rush with Zulu Bungy diving off from the bridge into the narrow Isthmus of Corinth (255.9 ft/78 m ).

Our adventure concludes at glorious Athens, the capital city of Greece, where many philosophers were born, was the heart of Ancient Greece, a powerful civilization and Empire.

Dominated by 5th century BC landmarks, you will be inspired by the Acropolis with the colonnaded majestic Parthenon temple, the Odeon of Herodes Atticus, the Temple of Olympian Zeus, the Panathenaic Olympic Stadium or Kalimarmaro, the dazzling Acropolis Museum and the captivating National Archaeological Museum.

You will enjoy breathtaking panoramic views from Mount Lycabettus, 300 meters above sea level before being tantalized by the neoclassical buildings of the 'architectural trilogy' consisting of the National Library, Athens University and the Academy of Athens.

The Tomb of the Unknown Soldier and the changing of the Royal Guards at Constitution Syntagma Square is also intriguing!

Lively Monastiraki is known for iconic landmarks such as the ruins of Hadrian's library, the Stoa of Attalos and the ancient Agora together with its flea market is of significant interest!

In contrast with the hustle and bustle of Athens, you will be charmed by the serene Athens Riviera and enchanted by the Temple of Poseidon at Cape Sounion, one of the major monuments of the Golden Age!

What is not included: