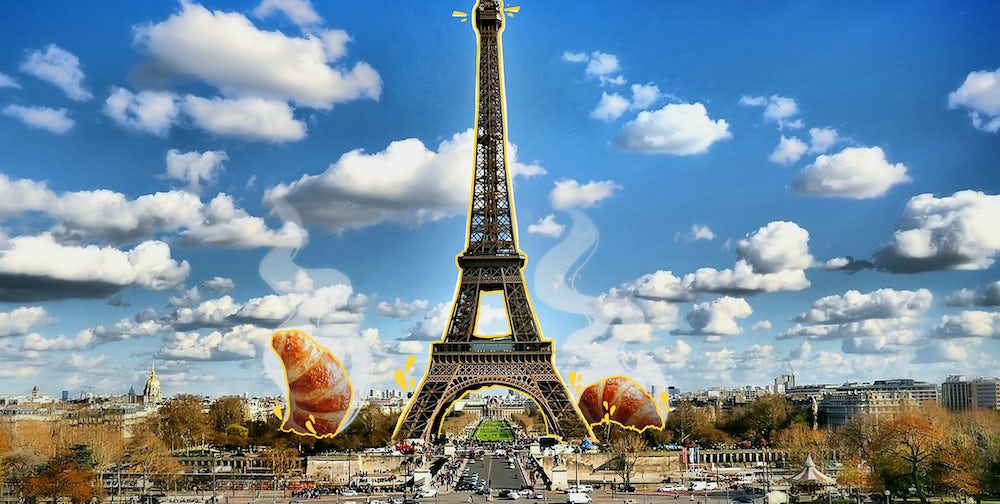 Discover the best places to visit in Paris with our list of its top attractions. 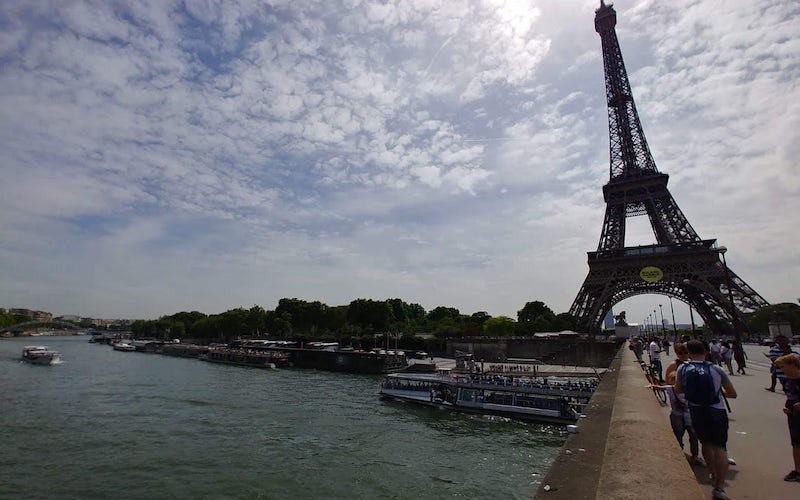 One of the symbols of Paris and the world’s most famous landmark, the Eiffel Tower was designed by Gustave Eiffel for the Paris World Exhibition in 1888. The tower offers stunning views of the City of Light from almost 300 meters above the ground. Visit the illuminated Eiffel Tower at night for a magical atmosphere—it's open until midnight.

How to get there: Métro Champ de Mars-Tour Eiffel 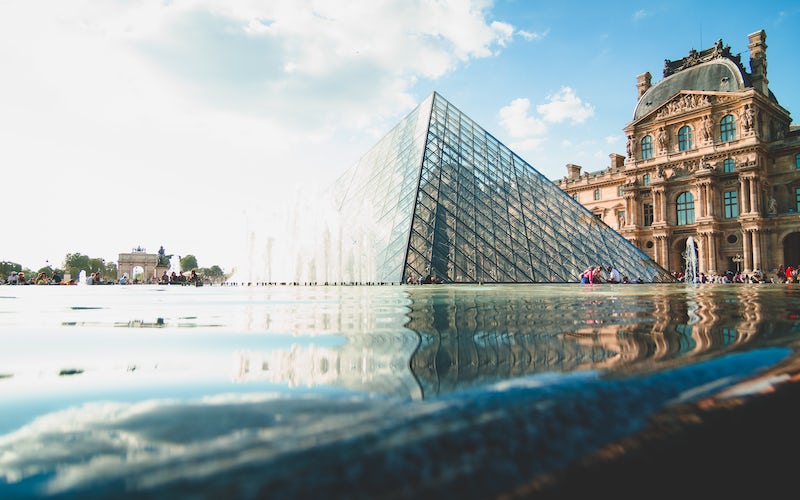 The Louvre is the largest museum in the world. Unsplash/Oscar Helgstrand.

If you spend 30 seconds looking at each work of art at the Louvre, it would take you more than a hundred days to visit the entire museum!

The largest museum in the world, the Louvre has a collection of no less than one million works of art. They range from the antiquity to the mid 19th century, and the most famous one is, of course, the Mona Lisa.

How to get there: Métro Palais Royal-Musée du Louvre

See also: Murders And Mysteries Of The Louvre 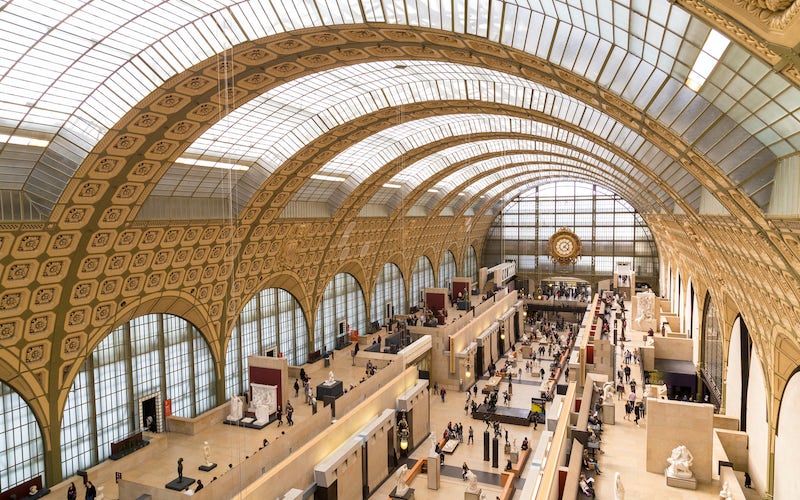 The interior of Musée d'Orsay. Canva/chaikovsky.

Famous for housing the largest collection of impressionist and post-impressionist masterpieces in the world, the Musee d'Orsay displays more than 2,000 paintings and 600 sculptures.

Here you can admire the works by Matisse, Monet, Cézanne, Degas, Van Gogh, and Rodin. The museum is located in the former Gare d’Orsay, a beautiful Beaux-Arts railway station constructed in 1900.

How to get there: RER Gare Musée d’Orsay 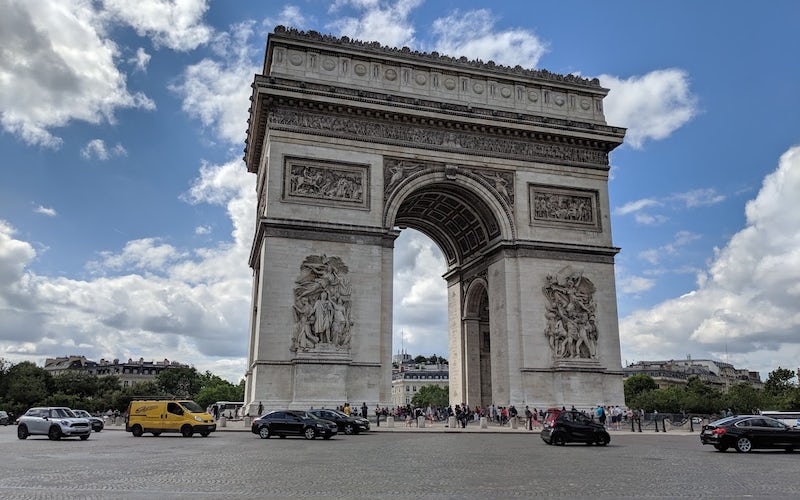 There's a tomb of an Unknown Soldier killed in World War I under the arch. Wonderguide/Hlöðver.

Arc de Triomphe is situated at one end of the Champs-Elysées, at the juncture of twelve avenues. It was commissioned by Emperor Napoleon I—inspired by the Arch of Titus in Rome— to commemorate the military power of France.

See also: Things to Do in Paris: A Brief Bucket List

Under the arch lies the tomb of an Unknown Soldier killed in WWI. The eternal flame at the tomb is lit with a ceremony every evening, a tradition that has never been interrupted, not even during the Nazi occupation of Paris.

How to get there: Métro George V.  Follow the underground passageway on the Champs-Elysées.

How much does it cost: You can walk around and under the arches of the Arc de Triomphe for free. €13 to climb to the top for some amazing views of the city. 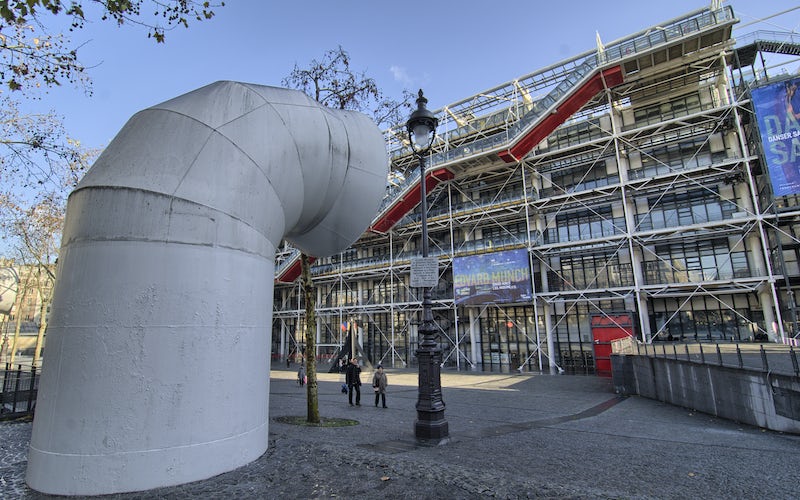 This hi-tech postmodern construction was designed by architects Renzo Piano and Richard Rogers in the 1970s. All the functional elements—plumbing, pipes, air vents and electrical cables—are a part of the building’s facade.

The Center houses the Musée National d’Art Moderne, the national collection of art from 1905 until today, displaying cubist, surrealist, pop art and contemporary works. Don't miss the spectacular view over Paris from the rooftop.

How to get there: Métro Rambuteau

How much does it cost: €14 for the museum entrance 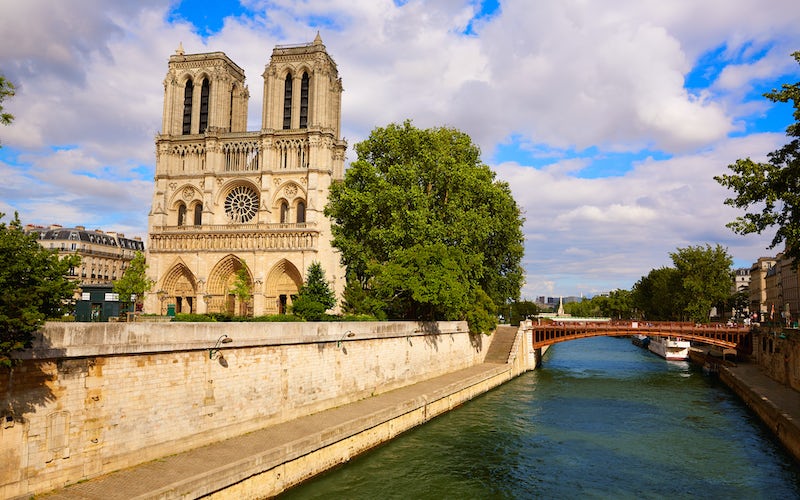 Cathédrale Notre-Dame, a Gothic architectural masterpiece, has adorned the Île de la Cité since 1163. The famous gargoyles on the facade are used to drain water from the roofs gutters. In front of the cathedral is the entrance to the crypt, which allows visitors to explore the historical ruins underneath the church from the earliest settlements in Paris.

How to get there: Métro Cité

How much does it cost: Free 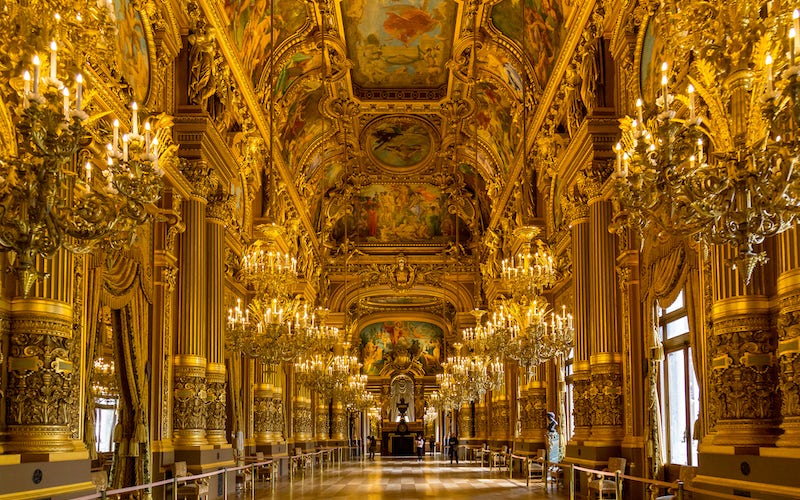 The extravagant interior of the Palais Garnier. Canva/chaikovsky.

Palais Garnier was a part of civic planner Baron Haussmann’s idea to renovate the entire city under Napoleon III. Designed by a little-known young architect Charles Garnier, it was the world's largest theater and opera house at the time of its construction. Palais Garnier is today the home of the Paris ballet.

How to get there: RER Auber 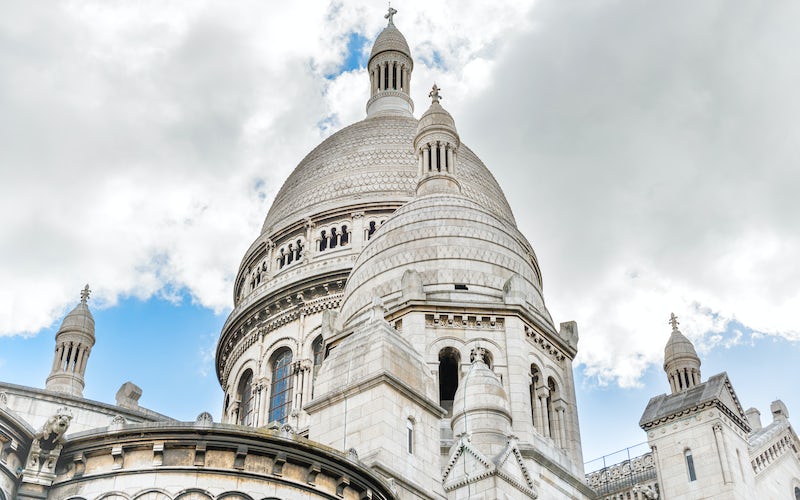 The famous basilica sits on the highest peak in Paris, Montmartre. Various places of worship have stood on this spot throughout the centuries: even Romans built their temples during the imperial reign. The name of the area reflects its status as an important pilgrimage site— Montmartre means "mount martyr". The Place du Tertre behind the basilica, that once hosted Renoir and Picasso, is bursting with artists.

How to get there: Métro Jules Joffrin + Montmartrobus

How much does it cost: Free 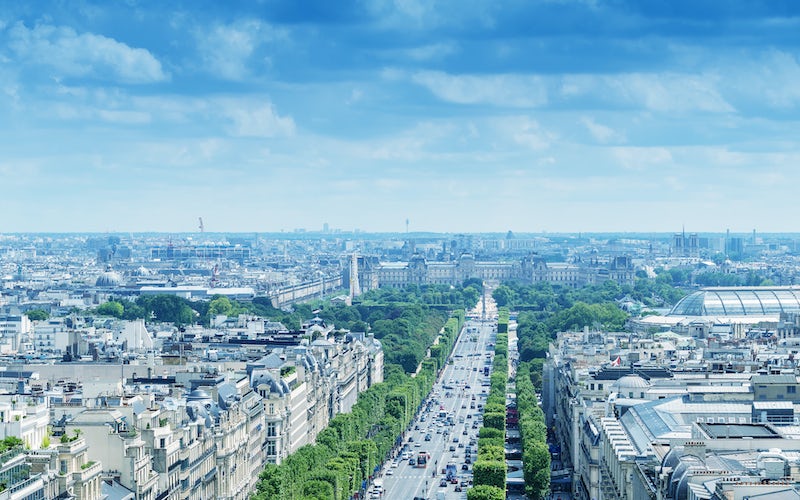 Champs Elysées Avenue is one of the most beautiful and most famous avenues in the world. It was completed in the 17th century to connect the Arc de Triomphe to the Place de la Concorde.

The street is today filled with exclusive shops and restaurants, together with the luxury flagship stores of brands like Louis Vuitton and Cartier.

How to get there: Métro George V or Franklin D. Roosevelt 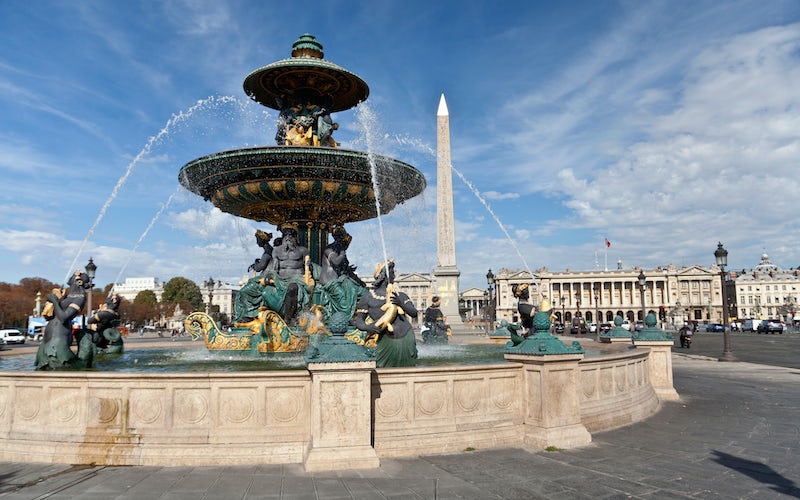 The largest square in Paris, Place de la Concorde is where Marie Antoinette and Robespierre lost their heads. The square was named after the Reign of Terror in the hope that it would become a place of peace and harmony.

The 23-meter tall Egyptian obelisk coming from the Temple of Luxor that stands in the center of the square is the oldest monument in Paris. At the edge of the Place de la Concorde, you'll find La Grande Roue, the biggest Ferris wheel in France.

How to get there: Métro Concorde 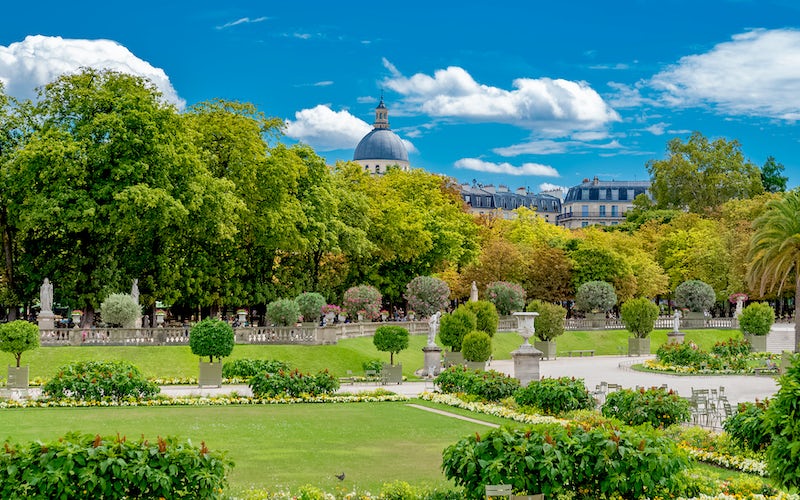 The Luxembourg Gardens is a perfect spot to rest after a long day in the city. Canva/Pascale Gueret.

The Luxembourg palace and gardens were commissioned in the early 17th century by Marie de’ Medici. Tired of her life in the Louvre, she ordered an Italian style palace to remind her of her childhood in Florence.

One of the most beautiful parks in Paris, the Luxembourg Gardens is a perfect spot to rest after a long day exploring the city. Rent a small wooden sailboat for the kids to push into the water with a long stick just like it was done at in the past.

How to get there: Métro Luxembourg 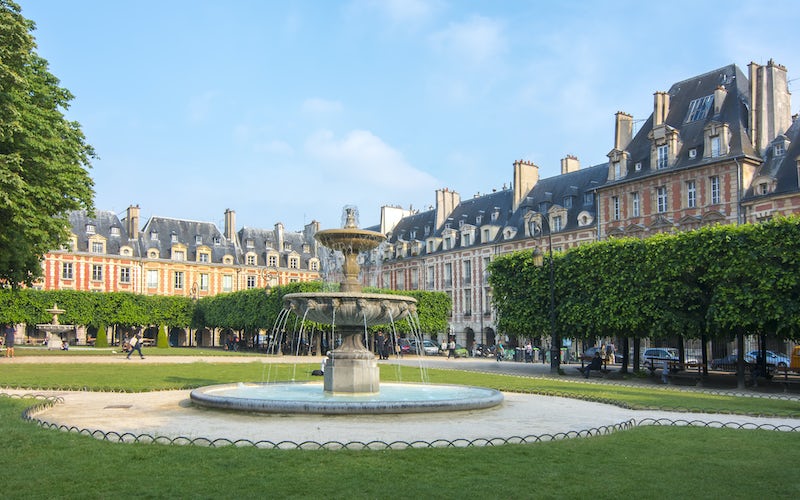 A perfect place for a picnic. Canva/Vladislav Zolotov.

Place des Vosges stands out with its large open space and red brick facades amongst the medieval architecture of the Marais. The square was officially opened to the public to celebrate the engagement of Louis XIII and Anne of Austria. Today, the park is the perfect place to enjoy a picnic with friends.

How to get there: Métro Chemin Vert or Bastille 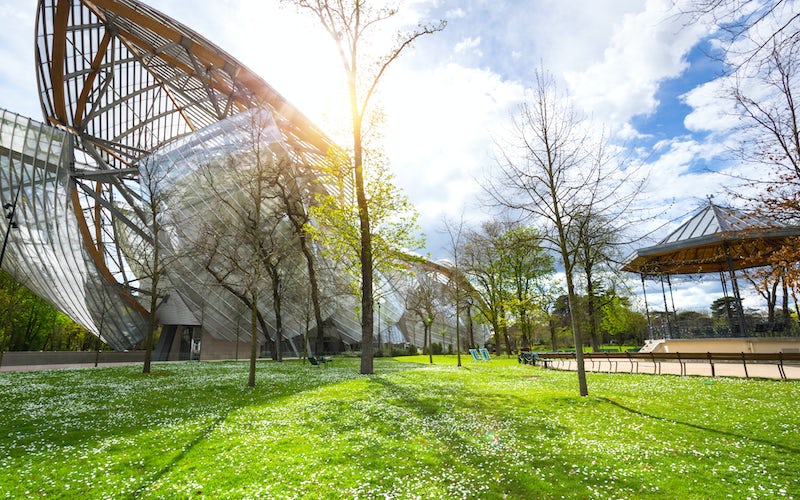 Foundation Louis Vuitton, designed by the visionary American architect Frank Gehry, is an artwork in itself. The structure is made of huge sails composed with glass panels, while the inside of the museum is a maze with many different rooms.

How to get there: Métro Les Sablons 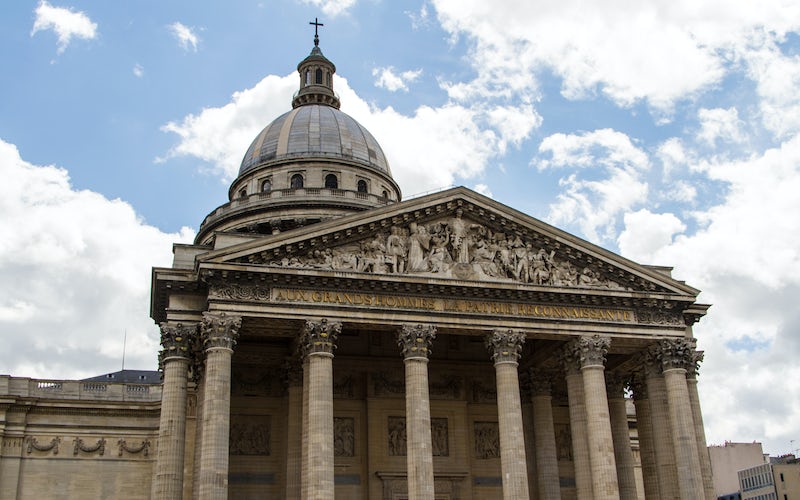 The Pantheon in Paris. Canva/AndreySt.

Modeled after the Pantheon in Rome, Panthéon was originally a church dedicated to St. Genevieve, the patron saint of Paris. The church was later rebuilt by King Louis XV to thank God for his recovery from illness. It was transformed into a mausoleum during the French Revolution. Among the famous people buried in the Panthéon are Voltaire, Victor Hugo and Marie Curie.

How to get there: Métro Cardinal Lemoine 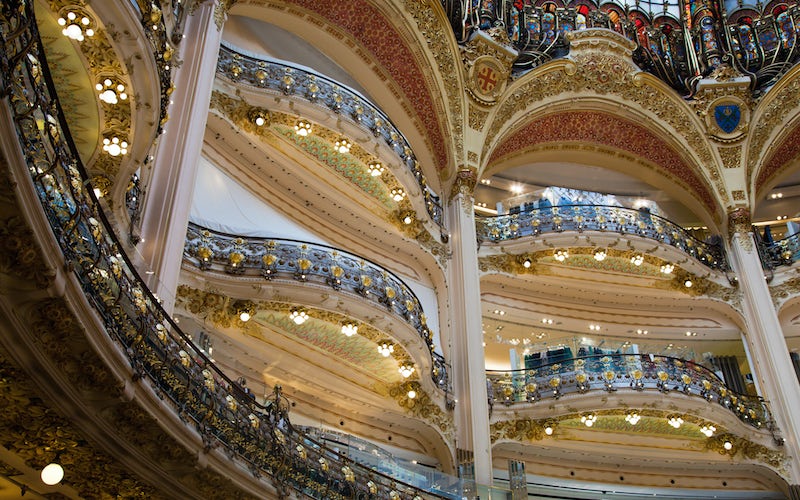 Inside the Galeries Lafayette. Canva/Michal Bednarek.

The Galeries Lafayette is a synonym of Parisian shopping. With its 43-meter high stained glass cupola, one of the most beautiful stores in the world resembles a theater more than an ordinary store.

Here you will find the world’s largest fashion collection consisting of more than 320 French brands as well as many international brands.

How to get there: Métro Chaussée d'Antin La Fayette

Things to Do in Paris: A Brief Bucket List
Wonderguide