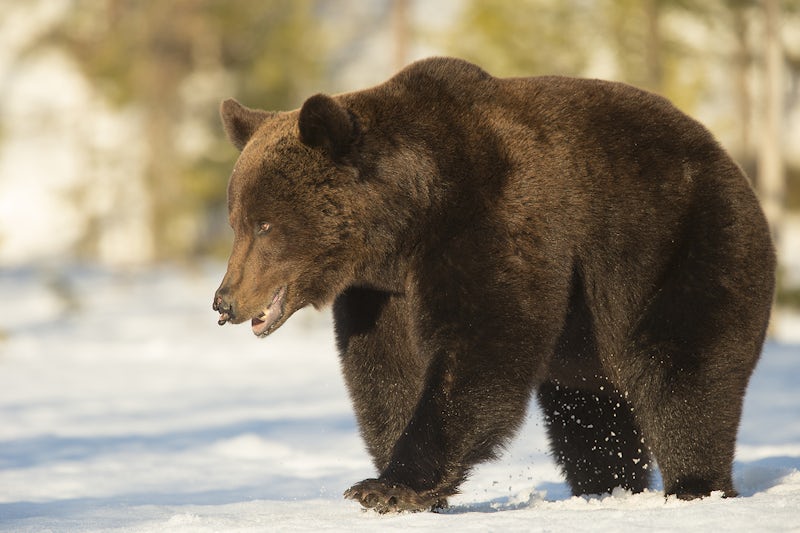 April is a good month to photograph bears, wolverines and even wolves.

The first bears of the year arrive to the hide area usually at the end of March up until the first week of April at the latest. Big male bears wake up first, whose arrival time depends on the spring conditions and the distance of it’s winter nest from the hide area. In the spring, bears are thinner and the their skin may be a bit saggy, usually referred to as ”a couple of sizes too big”. The day timetables of April have been adjusted to suit the change in day length, as bears may arrive earlier and this way daylight hours can be better utilised. The conditions of spring may vary from year to year, such as temperature, amount of snow and its melting rate. Spring generally progresses in the way explained in the following sections. In April springs progression occurs quickly and the landscape may change rapidly. In the beginning of the month there may be a lot of snow and by the end there may only be a little left. Changes can be very quick with fast melting of snow occuring if there is warm weather and rain. Great changes in conditions may even happen in one week when both light intensity and warmth increase. As spring progresses, the daylength increases several minutes every day. Snow reflects light efficiently so photography is not just limited to the hours of daylight available. It is also possible to photograph for longer during a full moon, when the sky is clear it is possible to photograph through the night. In addition to bears, wolverine actively move within the hide area and it is possible to photograph the wolverine throughout the year. Migratory birds arrive by the end of April, however some species may arrive during mid-April.

Bear night includes snacks that contains food, drink and utensils. Snack-packs contain thermos flasks of hot water that can be mixed with tea or coffee. Snacks are packed in backpacks that everyone carries themselves to the hide and back.

Personal snacks and drinks are allowed if you wish, only alcohol is forbidden. When taking your own extra snacks, simple snacks are recommended and should be taken into account that the packaging doesn’t rustle as this may scare bears.

There are winter sleeping bags provided in the hides. It is recommended to sit in the sleeping bag placed on the chair. This will help you remain warm and be able to photograph comfortably at the same time. Because the weather is cold it is important to bring warm clothing including a warm hat, warm gloves, woolen socks and moisture-resistant footwear.