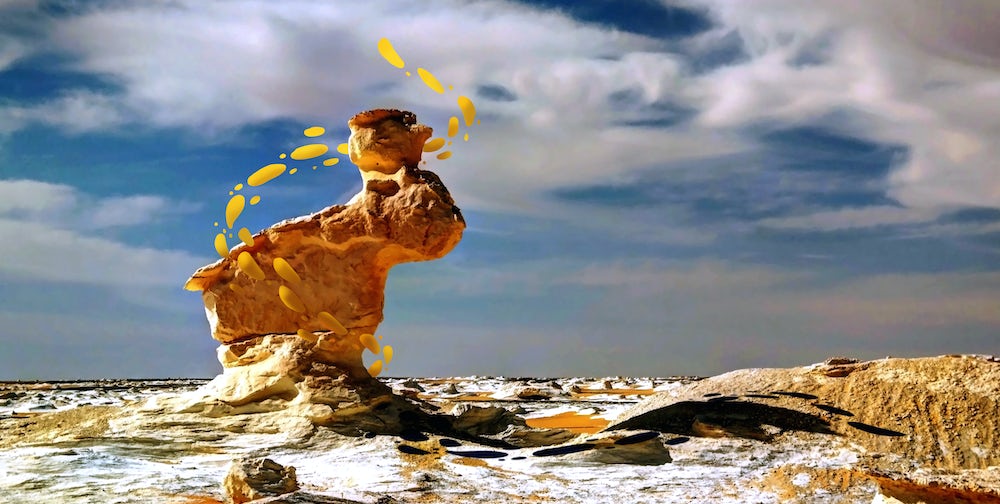 The Pyramids of Giza are without a doubt the most famous tourist attraction in Egypt and a lot of travelers visit Egypt for the sole purpose of checking them off their bucket list. However, there are so many stunning attractions in Egypt that do not get the same attention. Here's a list of the top 10 attractions in wonderful Egypt.

There is a reason that the name Egypt has always conjured up romantic and mystical images in the minds of people from all around the globe. As one of the birthplaces of civilization, with a proud history and traditions spanning thousands of years into the past, Egypt is one of those rare locations around the world where you can transport yourself from the modern world to the ancient one with just a quick bus or cab ride.

While Cairo has all of the trappings of any modern global city, venturing out into the deserts and fertile plains of the Nile River valley can suddenly feel like you’ve stepped through a portal to the time of pharoahs, nomads, and early explorers.

Whether you want to experience history and natural beauty, enjoy some luxury and rest at a pristine Red Sea resort, or sip coffee in cafes in Alexandria just as others have done for thousands of years before you, there is no end to the amazing attractions in Egypt. While it was tough, we have rounded down to a top ten list of attractions you should try to include on your excursion to Egypt.

While you may not be able to include them all on your trip, even getting to just a few of these will create memories and experiences that will last a lifetime.

1. The Pyramids of Giza 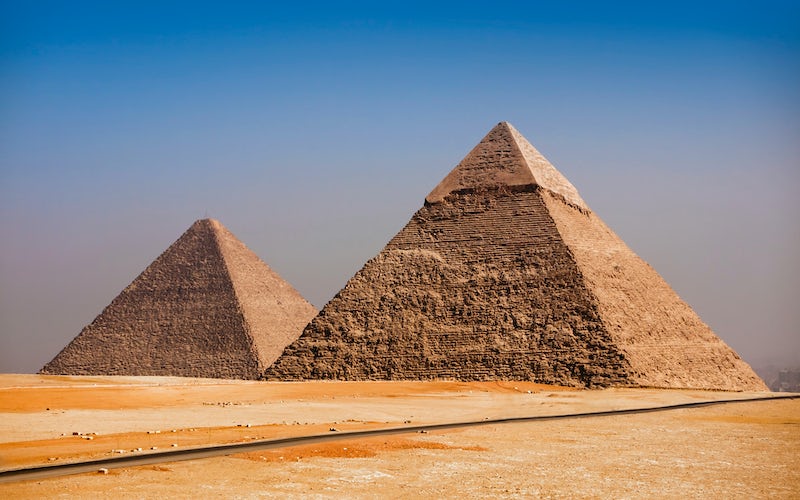 Do we even have to say any more? As the last remaining survivor of the Seven Wonders of the Ancient World, the Pyramids of Giza are known throughout the world simply by their shape.

Standing for a remarkable 4000 years, even as weather, wars, and mass migrations have changed and shaped all of the surrounding civilizations, these tombs to ancient pharaohs are pure demonstrations of the remarkable society that ruled this land long ago.

From the Great Pyramid of Khufu to the Sphinx, the most popular sites in Giza will draw the longest lines for understandable reasons. However, the surrounding desert plateau is home to a wide variety of tombs, temple ruins, and other smaller pyramids worth exploring, if you want to avoid the biggest lines and waits while you are there.

2. Valley of the Kings 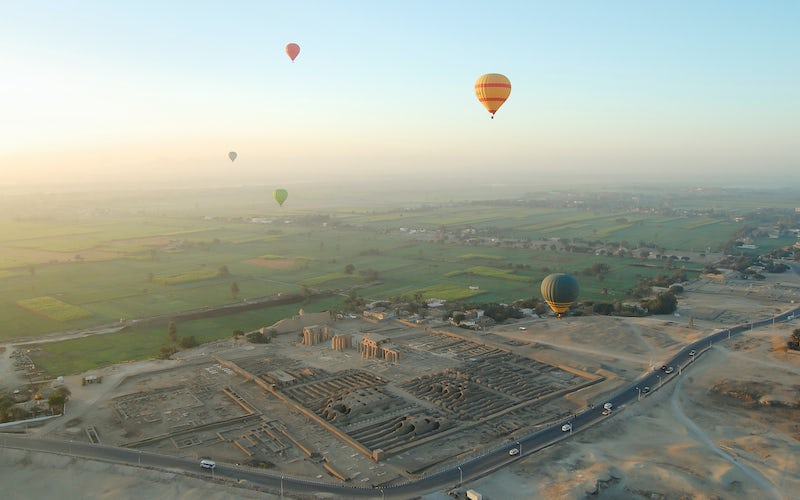 No less remarkable than its slightly more famous cousin in Giza, the Valley of the Kings on the west bank of Luxor has been a site of royal burials since 2100 BC, making it another location that has stood the test of time for nearly four thousand years.

It is an area of awe-inspiring views, ruins, and even names – from the mountain peak that overshadows it (Al Qurn), to the former names that have graced it, including the Great Necropolis of Millions of Years of Pharaoh, to the more simple but still powerful Place of Truth.

The valley includes 63 different royal tombs, and all are magnificent, even though some have been plagued by everything from vandals to erosion to even the sweat from all the visitors each year. Be aware that photography is not allowed inside of the tombs, so this is a place you will have to remember. But in a place so sacred and awesome, maybe that’s the best part. 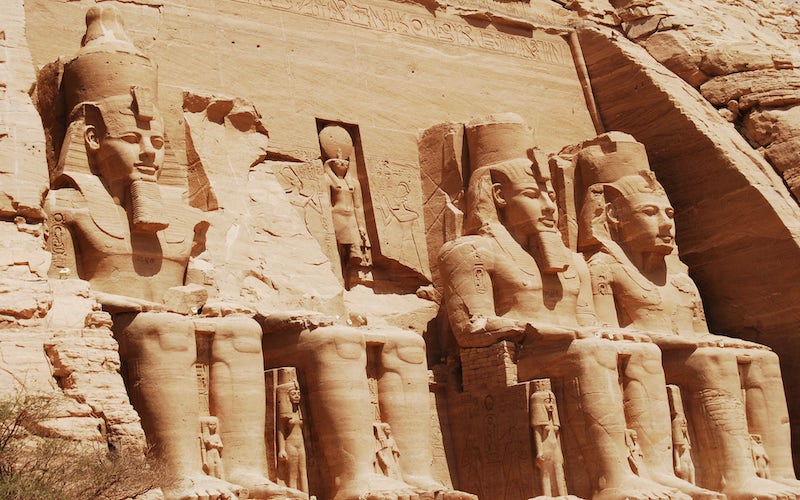 While Abu Simbel can be a bit of a hike from Cairo and the rest of the tourist centers, it is no less impressive than the other locations on this list. The temple complex was originally constructed under the reign of Ramesses II, dating back to the 14th century B.C. Perhaps the most recognizable image from Abu Simbel are the massive statues of Rameses carved directly into the cliffs, but the interiors are equally remarkable.

Recognizable from when it was used during filming of Raiders of the Lost Ark, Abu Simbel is yet another location that will make you feel as if you entered a time machine.

4. A Sailing Trip Down the Nile 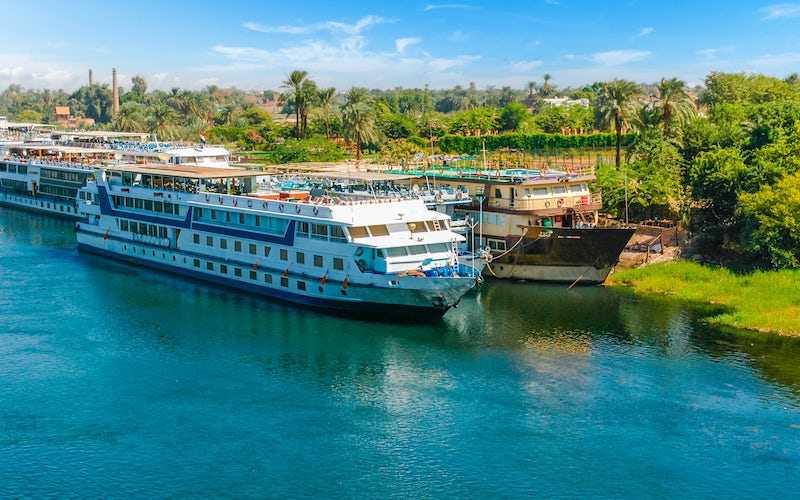 One of the most amazing experiences for many visitors to Egypt is a trip down the legendary Nile River on a felucca, a traditional wooden sailboat.

Eminently affordable and often including meals in the price, there are a number of different routes and trips available to visitors depending on your itinerary and travel desires. The most common ones include trips between Aswan and Luxor, as well as south of Aswan towards Lake Nasser.

5. The Red Sea Coast and Resorts 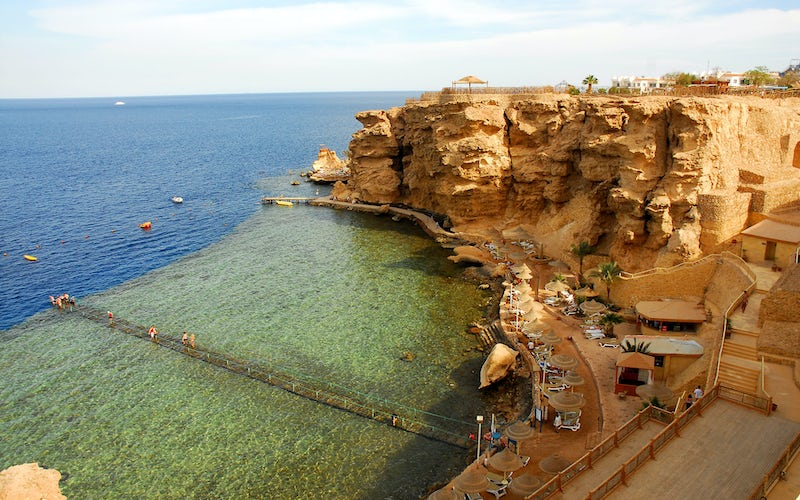 From travelers looking for exotic marine life and corals, to others simply looking for a spot on the sand and a place near the water (especially during the scorching summer months), Egypt’s Red Sea coast has been drawing visitors for years by offering all that one would expect from luxurious living on the waterfront.

Perhaps the most famous resort location is Sharm El-Sheikh on the lower Sinai Peninsula, teeming with various resorts to forget about life for a while. Another plus of visiting here is nearby… 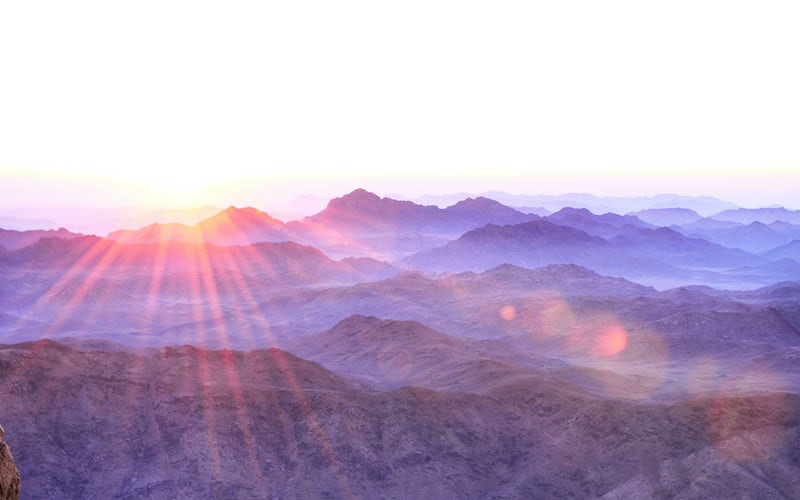 Famous and cherished among followers of Judeo-Christian faiths as being the mythical location where God delivered the Ten Commandments to Moses, Mount Sinai is not only historical but absolutely breath-taking, located in a remote region of the Sinai peninsula.

While it is not easy, it is possible to make the hike to the summit, where both a mosque and a Greek Orthodox chapel await tired hikers, along with resplendent views of the surrounding areas. For both nature lovers and those looking for a religious experience, this should be high up on your list and a worthwhile day trip away from the resorts on the Red Sea.

7. The Markets of Cairo 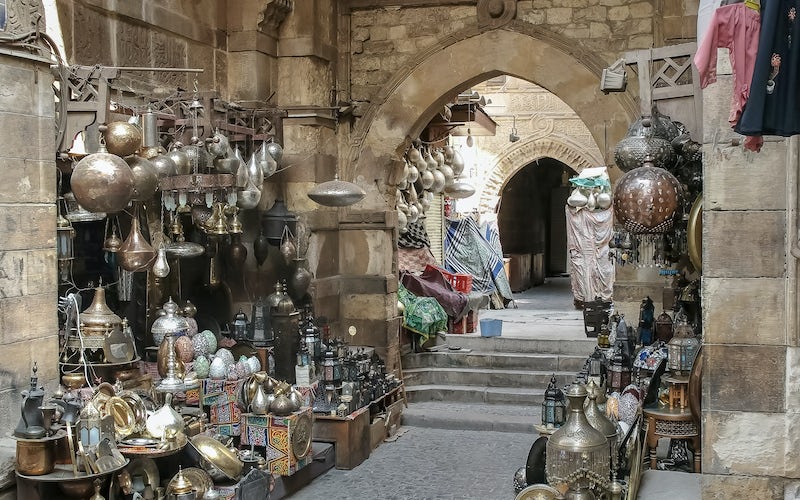 From the Birqash Camel Market, located 35 km northwest of Cairo, to the labyrinthine Khan-el-Khalili marketplace in downtown Cairo itself, visiting a North African marketplace may be the best way to feel transported to another world.

While the usual warnings of pickpocketing and petty crime are worth heeding, these markets are all fairly safe and eminently interesting. You can find everything from jewelry boxes to tobacco, painted papyrus to backgammon boards, and great little spots to sip coffee in between. It is also a chance to get a better feel for the local people and culture, away from the curated and sterile tourist locations that largely dominate tourist itineraries when visiting Egypt. 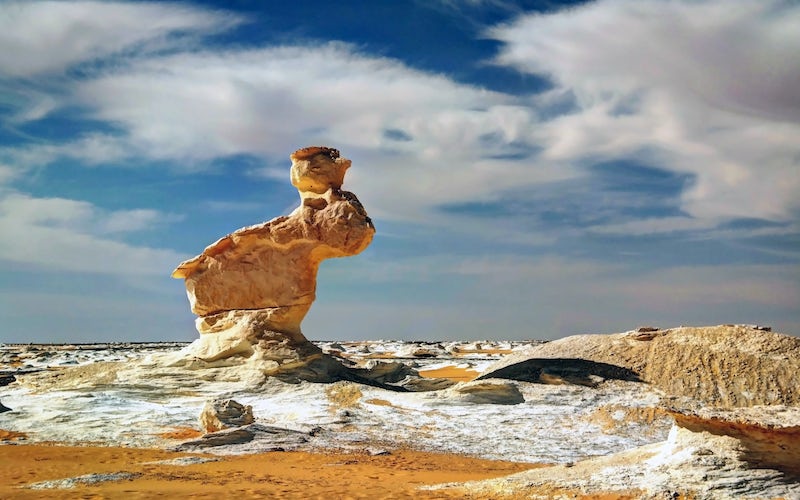 For those looking for a more natural experience, look no further than the 300-square kilometer White Desert national park. Northeast of Farafra, unbelievably white chalk rock spires spring from the Earth’s surface, creating a dreamlike and surreal landscape that makes you feel like you’ve left the Earth and gone to another planet entirely.

There are numerous other locations in the park, including Crystal Mountain (a large rock made of quartz) and the Twin Peaks, that offer jaw-dropping views of the surrounding areas. While foreigners are not officially allowed to camp in the park anymore, coming as part of a group often allows you the option to do so anyway, as local police will turn a blind eye. Experiencing sunrise or sunset in the park can be a spiritual experience with no equal. 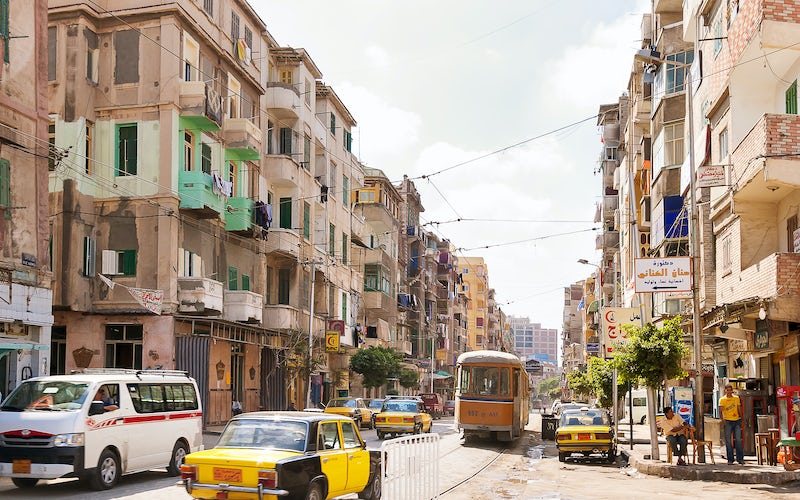 Another city with an unbelievably rich history, Alexandria’s location on the Mediterranean Sea has made it a crossroads for various cultures for thousands of years. While the city offers a number of exciting and interesting things to experience, two common favorites are the Alexandria National Museum and the Bibliotheca Alexandrina.

The national museum offers an interesting and beautiful tour through the city’s history, from ancient times to the modern period, and gives you a sense for how many cultures have crossed through the city at various points throughout history. Meanwhile, the recreated version of Alexandria’s ancient library is a testament to modern restorative construction, not only highlighting the magnificence and importance of the building it pays tribute to, but also now serving as the host of many international performers, as well as a variety of great museums.

Aside from these major cultural and historic sites, Alexandria offers visitors all of the culture and interesting shopping one could expect from such a crossroads of cultures. Indeed, spending an entire afternoon relaxing, having a good conversation, and sipping on delicious coffee at a café in the city can be just as worthwhile as any of the major sites you visit. 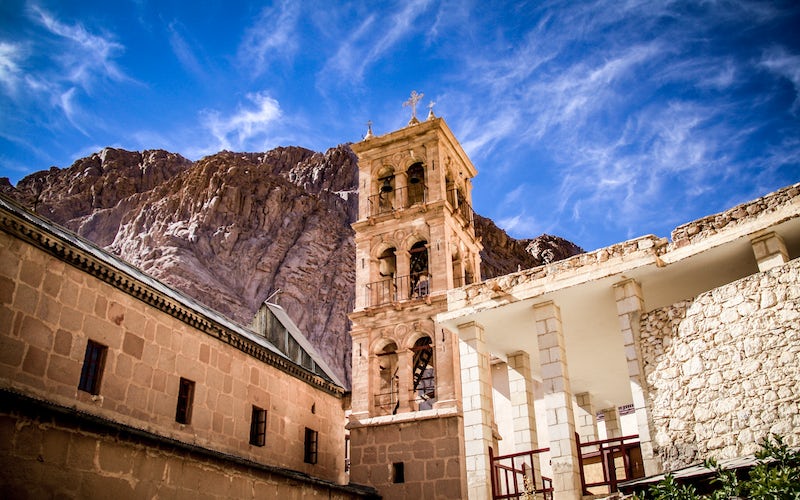 Widely considered to be one of the longest continually operating monastic communities in the world, this beautiful and ancient monastery was founded in roughly AD 330.

The Byzantine empress Helena created the refuge aside what was widely believed to be the burning bush from which God spoke to Moses, adding a spiritual weight to the site that can wow a visitor aside from the jaw-dropping vistas surrounding it. One of many UNESCO heritage sites in Egypt, the site has undergone many additions since its original founding, all of which you can learn about while touring the grounds.

Visitors should remember that since the site is still a functioning monastery, dress should be conservative and modest, including no shorts or bare legs. Women must also cover their shoulders before entering.

Alexandria: Experience the life inside
Wonderguide

How to Stay Safe While Traveling in Egypt
Story