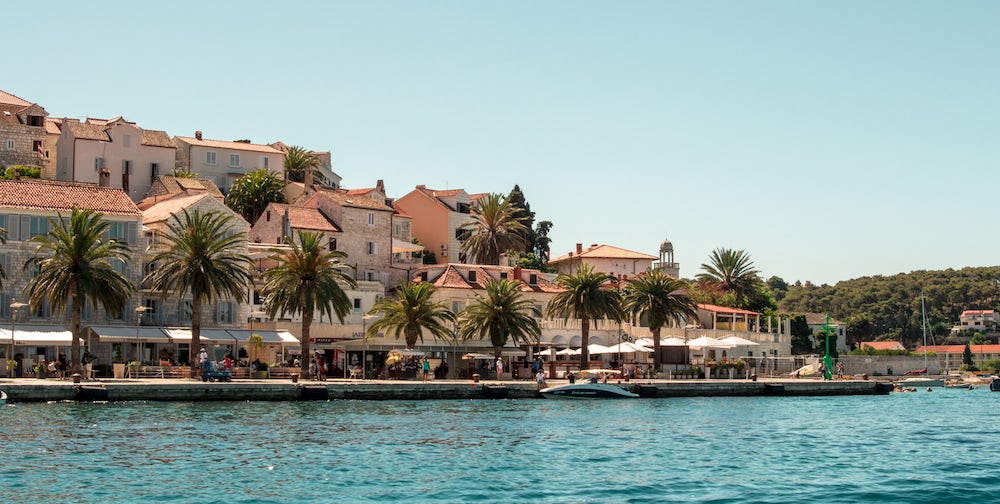 Located on the Adriatic Sea, Croatia – with its extraordinary island-speckled coastline – is a stunningly beautiful vacation destination. Zagreb is the capital, and the country has a population of over 4.28 million. Croatia is one of Europe's most sought-after getaway destinations, attracting thousands of international visitors each year.

In addition to the scenic coastline, Croatia also boasts gorgeous natural landscapes, UNESCO World Heritage Sites, beautiful beaches, hilltop towns, a diverse culinary scene, and warm, friendly people. Its capital, Zagreb is known for its medieval town and unique museums. Dubrovnik, a major coastal city, has massive 16th-century Gothic and Renaissance buildings and is the setting for some famous movies and television shows.

Climate and Weather in Croatia 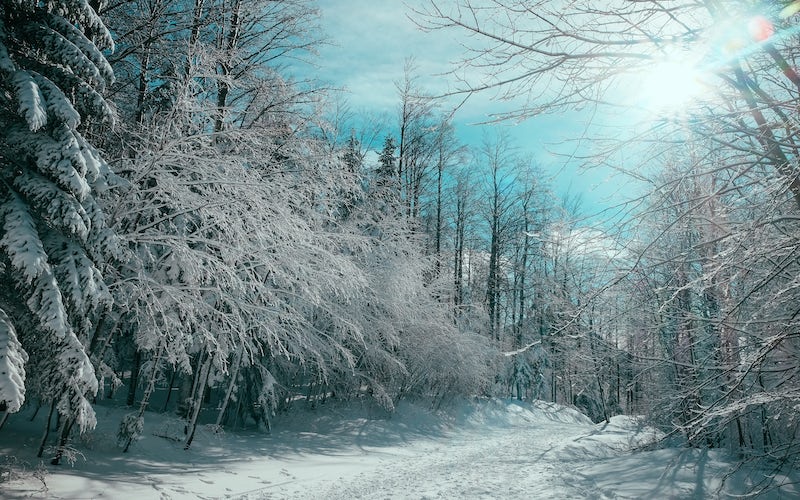 Although the climate is Mediterranean along the coastline, the winters can get cool towards the interior. Unsplash/Igor Cancarevic.

Croatia has two distinct climates; the Mediterranean climate along the coastline and the continental climate towards the interior. The coast typically experiences hot, sunny, dry weather during summer, and moderately cold weather in winter. During summer, the average temperature is 86°F. Winters are little cooler; with the average temperature hovering around 41°F. Heading away from the coast means that winters can be pretty cold, while summers are hot and dry. Weather along the southern Adriatic is typically sunnier and drier than the northern region of Istria.

The Best Time to Visit 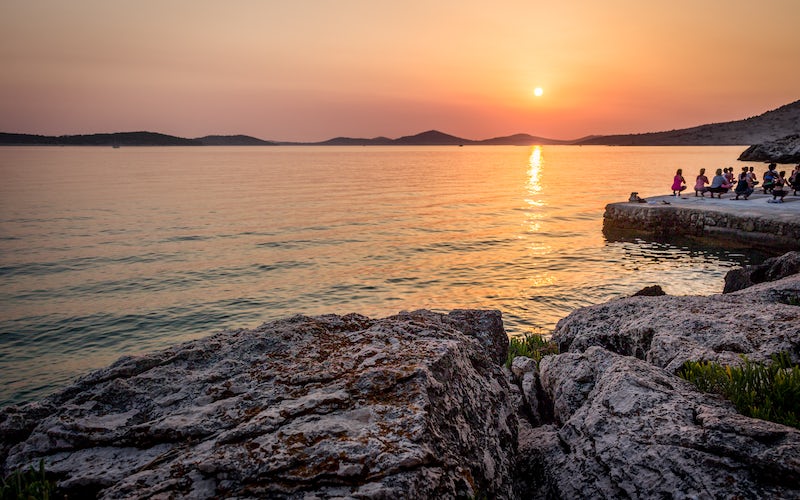 A majority of travelers head to Croatia during July and August to catch the stunning weather. However, the busiest months are not always the best time to visit the country. Try avoiding the high season when the weather is humid and crowds are inevitable. Visiting during the high season may also see you paying more for National Park entrance fees, ferries, and other attractions.

With fewer crowds, pleasant weather, and a warm coastal temperature; June and September are arguably the best months to visit Croatia. The country is popular among Austrian and German travelers, especially regions of Kvarner and Istria, which means crowds tend to increase during German school vacation (May to June; it changes every year).

Getting There and Around 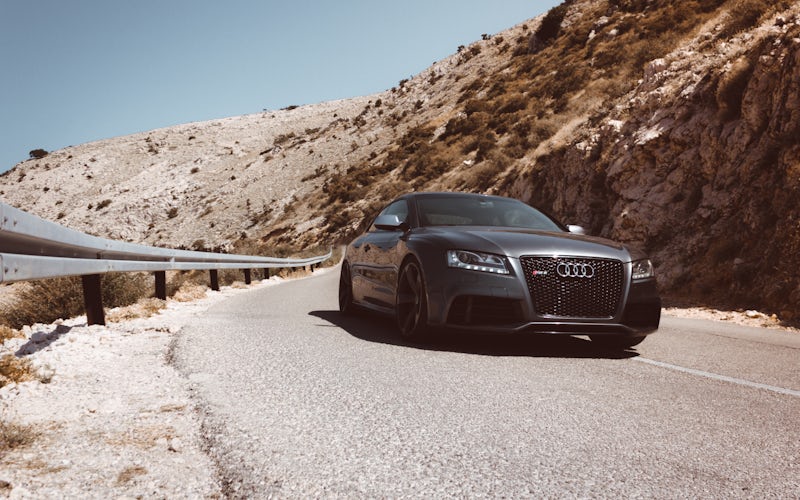 One of the most convenient ways to travel around Croatia is by car. Unsplash/Marc Kleen.

Visiting Croatia from anywhere in the world is easy. From April to September, several airlines offer direct flights from all over Europe to major Croatian cities. Besides, Zagreb and Split are well-connected by flights with the rest of world throughout the year. Bus services are also available from various European cities. Train connectivity to and around Croatia is very limited, and it is not recommended to travel by train. However, if you need more information about the train schedule, you can visit Croatian Railways website.

One of the most convenient ways to travel around Croatia is by car, which you can rent from the airport or at a number of other locations around the country. Ferries are one of the most popular modes of transport around the country too, and sometimes the only option to visit country’s beautiful islands. The famous ferry ports include Zadar, Rijeka, and Split. Ferries also depart from small coastal towns like Makarska, Drvenik, Brsecine, Ploce, Orebić, and Prapratno. 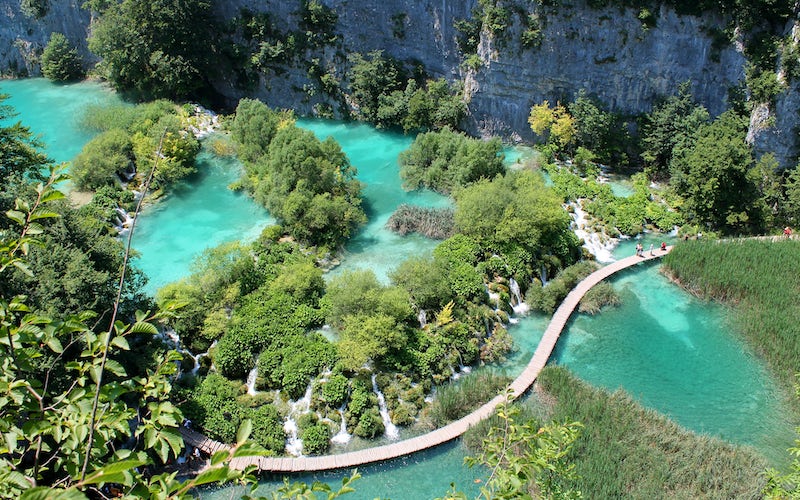 With a surface area of just over 56,000 square kilometers, Croatia is relatively a small country. Due to its geomorphological, ecological and climatic conditions, regarding Biological diversity, Croatia is one of Europe's wealthiest countries. The natural beauty is diverse here; from soaring mountains to the Adriatic Sea, the plains of Slavonia to the rolling hills of Zagorje and Istria.

Croatia boasts eight national parks, two nature reserves, and ten nature parks. National parks such as Mljet, Kornati, and Brijuni are nestled on the islands and are famed for their abundant marine life. The Risnjak, Paklenica and Northern Velebit cover the mountainous regions of the country. They feature lovely meadows, limestone rocks, and vast forests. Plitviče Lakes, the most visited national park in the country, and Krka National Park are both known for their streams, rapids, lakes, and waterfalls. 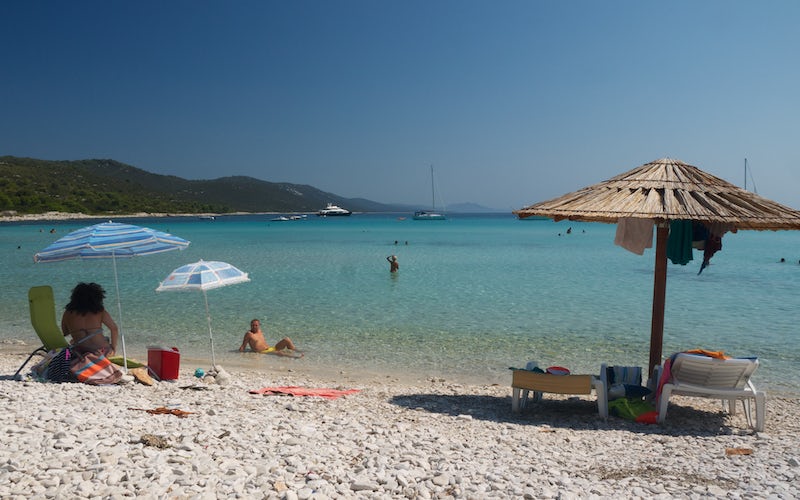 Two of the most famous coastal regions in the country are Istria in the north and Dalmatia in the south. Lying in central Dalmatia, the Makarska Riviera offers some of the most scenic beaches in Croatia. Over in Rovinj, Mulini Beach is a hip stretch of sand with a seafront promenade and sunbathing areas. Istria is famous among windsurfers. Along with Premantura and Preluk, the village of Ravni offers some of the most popular locations for windsurfing.

While sandy beaches are not as common in Croatia, that doesn't mean they don't exist. Sakarun Beach on Dugi Otok is one of the most beautiful beaches in the country. This beach is favorite among locals and travelers alike, and it never gets overcrowded. The water is warm and crystal clear, ideal for swimming. Nestled on the island of Lopud, Sunj Beach is a gorgeous sandy beach offering deck chairs, shack restaurants, restrooms, and changing cabins. Omiš in central Dalmatia is ideal for families. The beach offers various activities including windsurfing and beach volleyball. You will also find plenty of ice cream parlors, bars, and restaurants along the beach. 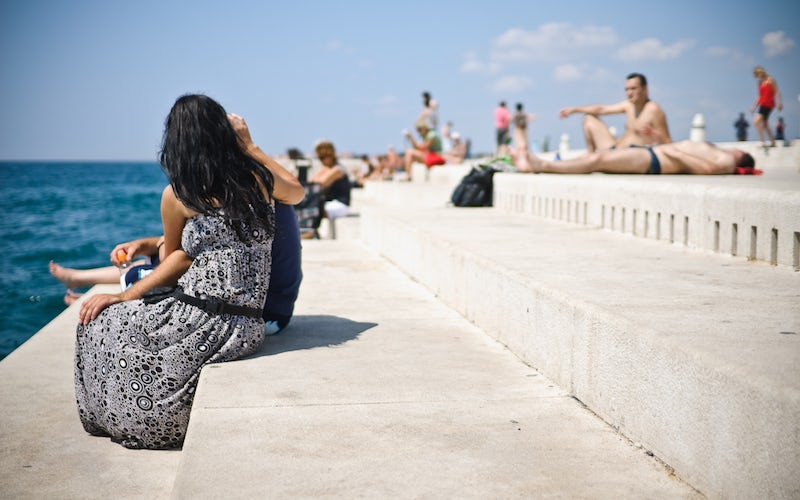 Located in northern Croatia bordering Italy and Slovenia, Istria is famed for great wines, truffles, fresh seafood, and olive oil. You will find plenty of historical and cultural Italian influences here, as the area was once under Venetian rule. Pula, on the southern tip of the region, is the largest port city and an ideal base for exploring Istria’s many exciting destinations. Further north is the pretty town Rovinj, where you can enjoy St. Euphemia's Basilica, Rovinj Town Museum, and Lone Bay; a charming beach just south of town. Rent a car to discover the beauty of hilltop towns like Motovun, Grožnjan, Hum, and Oprtalj.

Zadar is a fantastic base to explore some of Croatia’s famous national parks. This includes the scenic waterfalls of the Plitvice Lakes National Parks and hiking the nearby trails in Paklenica National Park. Pag Island is just an hour's drive from Zadar. The island is well-known for its cheese, especially one made from sheep’s milk. The town of Novalja can be found to the north of the island and is considered one of the premier nightlife destinations in the country.

Activities to Enjoy in Croatia 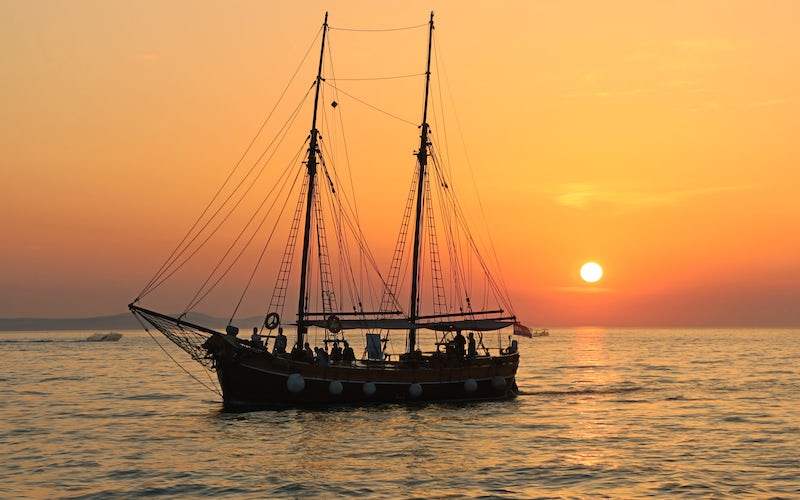 Croatia offers plenty of exciting things to do all year round. Food lovers will enjoy exploring diverse cuisines, especially in Zagreb, Dubrovnik, Istria, and Split. Croatia produces some of the best olive oil in the world, and there are many places where you can go to sample olive oil and learn how to recognize the most quality produce.

Novalja on Pag, Tisno on Murter, and the city of Hvar offer 24-hour entertainment and nightlife for party people. Outdoor enthusiasts will love Paklenica, Omiš, and Ćićarija. Sailing the incredible Adriatic is a great way to see the gorgeous coastline and discover hidden gems of Croatia's southern Dalmatian coast. Many local companies offer sailing boats, catamarans, or motor yachts to rent. Žuljana on the Pelješac peninsula is a perfect location for divers. Visitors will find several diving spots within an hour's boat ride from the village. This is a fantastic place to explore hidden bays, coves, and pebbled beaches, and also enjoy the surrounding flora and fauna. 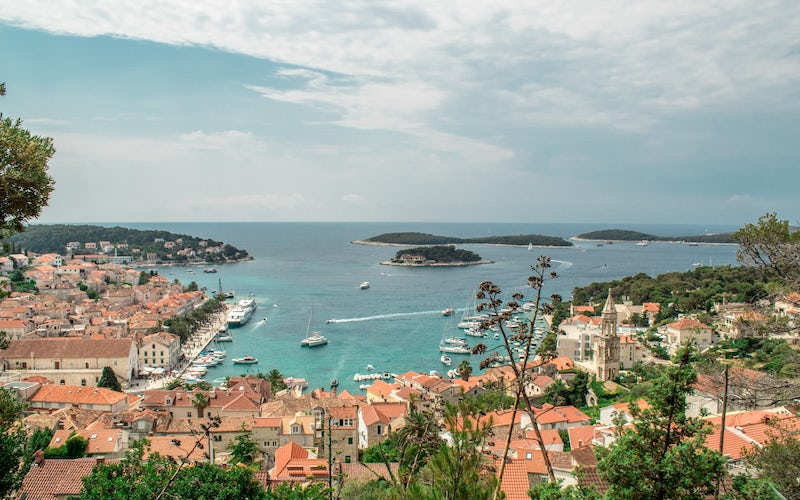 Rather than taking day trips from Dubrovnik or Split to the islands of Vis, Korcula or Hvar individually, plan your itinerary to go from one island to another. Each island offers something new, and you will find shared water taxis and ferries to take you to your destination without having to head back to the mainland. Known as "the pearl of the Adriatic,” Dubrovnik boasts some of the country's most iconic historical sites, and is now famous as the filming location for 'Game of Thrones.' Split is famous for its beaches, but don't miss the chance to see the Roman remains of the vast Diocletian's Palace.

Hvar is beautiful and well-known as a summer resort. Highlights of the island include a hilltop fortress, 13th-century walls, and the Renaissance-era Hvar Cathedral. In contrast, Korcula is laid back, charming, and peaceful. Take a bike tour of the island and explore some of the pristine beaches with their vibrant beach bars. If you love wine, it’s worth visiting the local wineries and sample the local Grk Bijeli.

Traditional Croatian dishes have few similarities with Austrian, Hungarian, Italian, and Turkish cuisine. Cuisine also varies from one region to another. Typical Mediterranean cuisine is famous along the Dalmatian coast and is mainly based on greens, olive oil and fish seasoned with rosemary, parsley, garlic, and more. Zagreb has a style similar to central European. Typical Zagreb cuisine primarily includes meat recipes, while side dishes feature potatoes, root vegetables, and cabbage.

Crni rižoto (black squid risotto) is a must-try Croatian dish. This dish can also be made with mussels, clams, or shellfish. Zagorski Štrukli is another favorite you must taste while you are in Zagreb. This delicious pastry is stuffed with sour cream, cottage cheese, truffles, or blueberries. Pašticada is one of the most popular Dalmatian dishes; it's comprised of a beef fillet marinated in wine vinegar and served with gnocchi. Other must-try classic delicacies include Brudet (fish stewed with tomato sauce, onions, and spices), Maneštra (bean soup made with pešt and cured meats), Soparnik (a traditional Dalmatian pie made with Swiss chard) and Punjena paprika (bell peppers stuffed with rice, minced meat and spices).

Off-the-Beaten-Path Things to Do in Dubrovnik
Story

The Best Beaches in Croatia
Story