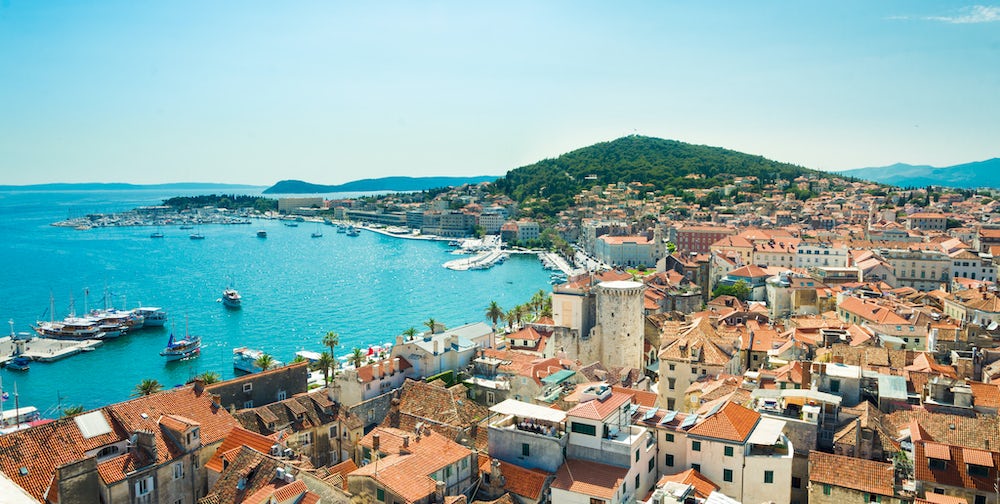 Split is the second largest city in Croatia, it is also the largest in the coastal region of Dalmatia. For those visiting Split, this article will help point newcomers to the right direction.

Split is the unofficial capital of the Dalmatian region and the second largest city in Croatia. It’s a city full of attractions and entertainment; every travelers dream. Ranging from historical and artistic immersion, to fine dining, coastal adventures, and much much more, this article will cover the most important things to do while in Split.

The most famous attraction in Split, and one of the most famous in Croatia, is the Diocletian’s palace. Built for the Roman Emperor Diocletian in preparation for his exciting retirement, the palace dates all the way back to the 4th century. The structure actually holds a bit of controversy because of its large size, with some experts saying that it is so large it should be considered more of a fortress than a palace. One half of the structure was used for Diocletian’s personal use, while the other housed a military garrison, the “palace” is so large in fact, that it makes up half of Old Town Split! The building today maintains its ancient Roman architecture and houses many businesses, ranging from restaurants to stores to cafés. Thus, the Diocletian’s palace is the perfect example of the modern world blending in with the ancient. 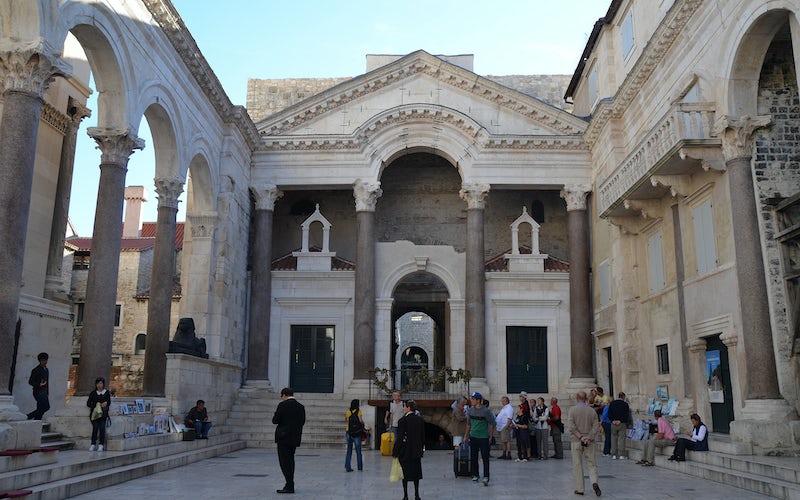 Diocletian's Palace was built in the 4th Century. Flickr/Carole Raddato.

After you’ve visited Diocletian’s palace, it’s ideal to take a brief and pleasant walk to one of Split’s oldest natural attractions, Marijan. Marijan has been a natural attraction since the 3rd century and it continues to be one of the most popular spots in the city amongst tourists and locals alike. So what exactly is Marijan? It’s a hill! Yes, one of the major attractions in Split is a simple hill. But Marijan is not like any other hill, no Marijan is quite special indeed.

What makes this hill so unique is how it is situated, being completely surrounded by the city of Split and the coast with the interior being covered in a dense pine forest. Some of Split’s major attractions can be found on the hill, for example the city zoo, numerous pristine beaches and the Institute of Oceanography and Fisheries. Although Marijan may seem like any other hill at first glance, it is uniquely beautiful and definitely worthy of a visit.

Split is a long coastal city, with something to do every few meters. One of the best things to do while in Split is to walk around the old city and stumble upon new adventures. And what better way to have an adventure than to immerse oneself in the ancient past? The oldest commissioned museum in all of Croatia is located in Split, the Split Archeological Museum. The Museum opened in 1820 and contains pieces covering the histories of Split and Croatia, dating all the way back to prehistoric times. The museum houses over 150,000 artifacts which can bring to light the city’s history and culture, particularly during ancient Greek and Roman times. The most popular exhibit is a set of stone encryptions from the nearby ancient Roman capital of Dalmatia, Salona. The Split Archeological Museum will take you back in time and shed a light on the history and progress of the city of Split, the region of Dalmatia, and the country of Croatia. 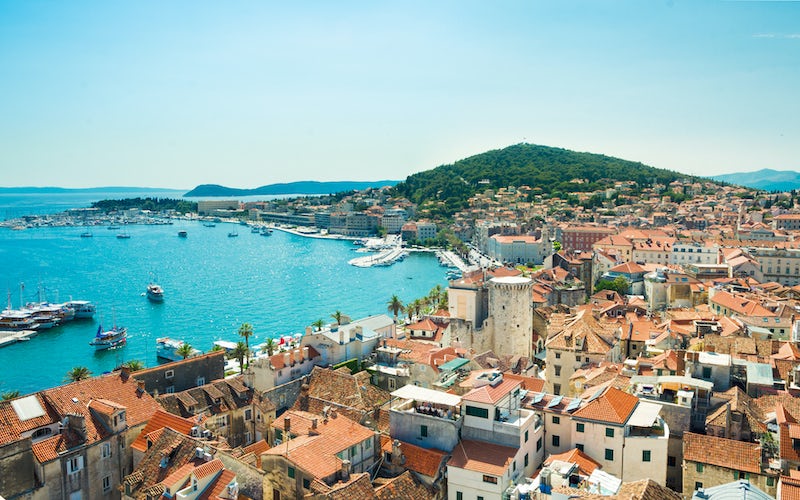 Since Split is a coastal town, there are numerous beaches to choose from. Flickr/Theo Crazzolara.

Since Split is a coastal city, it has many great beaches where you can escape the summer heat. Split’s beaches are diverse, ranging from sandy to pebbly, and crowded to near private. Before choosing a beach, you need to consider what you’re looking for. When I am in Split, I have two personal favorite beaches that I choose from, each being very different from the other. The first beach is Trstenik, which is maintained by the Radisson Blu Resort.

Trstenik is one of the cleanest and clearest beaches in Split and the resort has an incredible VIP area, which is both good for relaxing, and meeting new people, depending on what mood you’re in. When looking for more privacy, Bene is the go-to beach in Split. Although it is popular with families, and tourists in general, there are many private and secluded spots to be found on this beach line and there’s a variety of bars and restaurants close by for when one gets thirsty or hungry. Split, because of its coastal diversity, is perfect for beachgoers.

Split, being a port city with a diverse history and gastronomic culture, has a wide range of gastronomical selections. Being Dalmatia’s largest city, Split sticks to its basic roots while incorporating different styles of dining experience. One of my personal fine dining experiences is Konoba Nikola. Konoba Nikola has a menu that can compete with any other fine dining restaurant in Croatia, although the prices are significantly lower. Nikola is by far the most affordable fine dining restaurant I have ever had the pleasure of eating at in Croatia; a dinner for two with wine included typically doesn’t cost you more than 1,000 Kuna (around 135 Euros). Despite the affordable prices, the food at Nikola is absolutely mindblowing. Head Chef Mladen Erceg’s menu contains mostly seafood selections with a basis in the old school Dalmatian kitchen, however they still have an artistic flair to live up to standards of true fine dining. 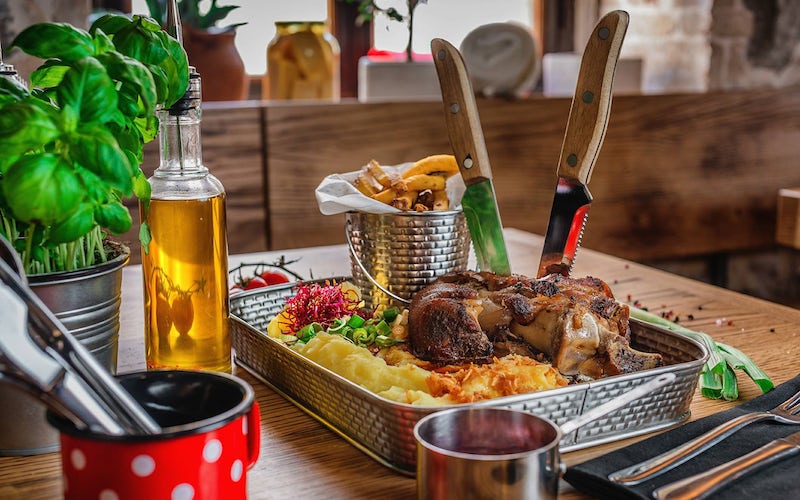 If you're tired of seafood, you should head to Bakra. Photo: Bakra Steak and Pizza Bar@Facebook.

When vacationing on the Dalmatian Coast, the food selection tends to be characterized with an abundance of fish options. This can become pretty boring, even for those who are huge fans of seafood. Thus, finding restaurants that specialize in other types of food can be a godsend to many “fish-sick” travelers. This is where Bakra steak and Pizza Bar comes in hand. As the name suggests, Bakra is a restaurant in Split that serves a wide variety of steaks and pizzas. And despite the coastal location, the steaks and pizzas are absolutely to die for and made of the highest quality meat and ingredients. For those looking to take a break from the barrage of fish that tends to come along with a coastal vacation, Bakra Steak and Pizza Bar is highly recommended.

Places to Grab Coffee and relax

Croatia has a rich coffee culture, which is good news for those who can’t survive without their daily dose of caffeine. While Split doesn’t have a specific part of town where everyone congregates to have their morning, afternoon and evening coffee, it does have many cafés spread across the city, and some of them are in fact very scenic. Since a quality café can be found in virtually every part of the city, the choice really comes down to environment and scenery. 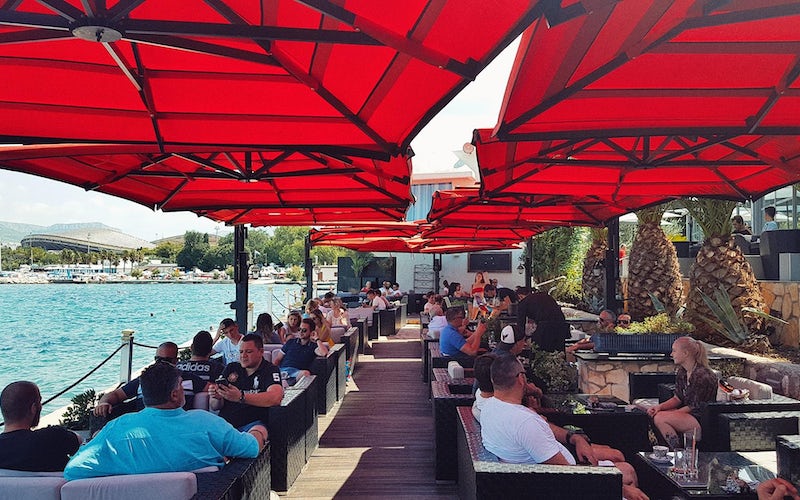 My two favorite places to grab coffee are right on the beach and in the Diocletian’s palace. In terms of beach cafés the selection is really quite endless, and the vast majority of them are absolutely fine. However there is one that slightly stands out due to the delicious cakes they serve, which go great with a proper coffee, ProCaffe, is the place to go when looking for a good beach coffee. Finally the true gem of Split coffee, Teak, found in the interior of Diocletian’s palace. This café is mostly visited by locals, so that’s how you know it’s good. Additionally, since Teak is slightly off the beaten path, it gives you a nice chance to relax and get yourself together before continuing your adventures in Split.

Nightlife has become increasingly popular in Croatia. This is also true for Split, which has become well known for hosting the Ultra Music Festival. However, Split has a variety of  year-round nightlife options for those who are eager to enjoy themselves on a night out. Typically, one of the biggest problems when going out for drinks on the Croatian coast is the high price of drinks compared to the mainland. However, one bar in Split really goes directly against this trend. This bar, called Gaga cocktail bar, serves cocktails so cheap that it should be considered a public safety hazard! And despite their cheap price, the cocktails are absolutely fantastic. In my opinion, Gaga as the perfect place to start a solid night out in Split. 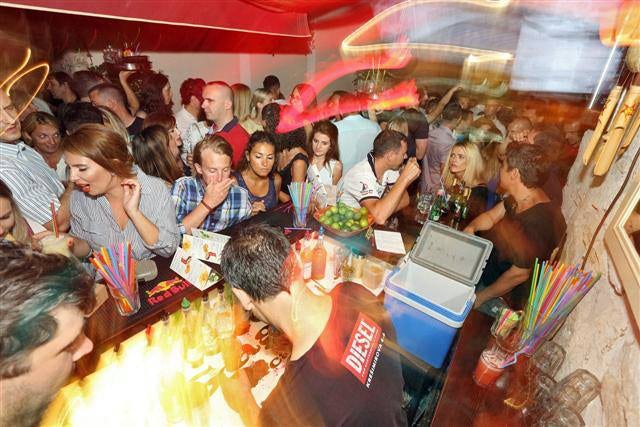 After having a proper pregame on cheap cocktails at Gaga bar, it is time to head to a more sustainable, party-till-the-next-day oriented club. Split has a lot of clubs to choose from but the best one is called Central the Club, which is considered both by locals and tourists to be the top late nightclub in all of Split. While the prices, compared to other nightclubs in Croatia, tend to be on the higher end, the club provides an incredible experience. The crowd is also excellent, with mostly young people, and a fair mix of both tourists and locals. Central is a great place to meet people and have an unforgettable night out on the Dalmatian coast.