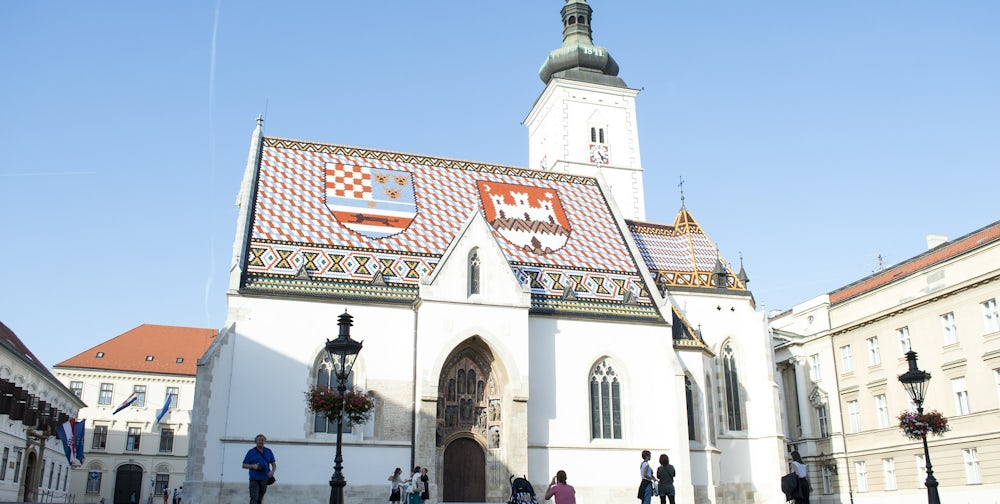 Exploring Gornji Grad in the Historic Center of Zagreb

Wander along the lush manicured gardens of Gornji Grad and take in the aromas from countless cafes lining the pedestrian streets. This is where the locals love to hang out - and probably there’s not a better place in Zagreb for people-watching.

At the heart of Gornji Grad stands St. Mark's Square (Markov Trg), a large cobbled open space around the Church of St. Mark (Sv. Marko). Originally dating from the 13th century, the church was rebuilt over subsequent centuries. 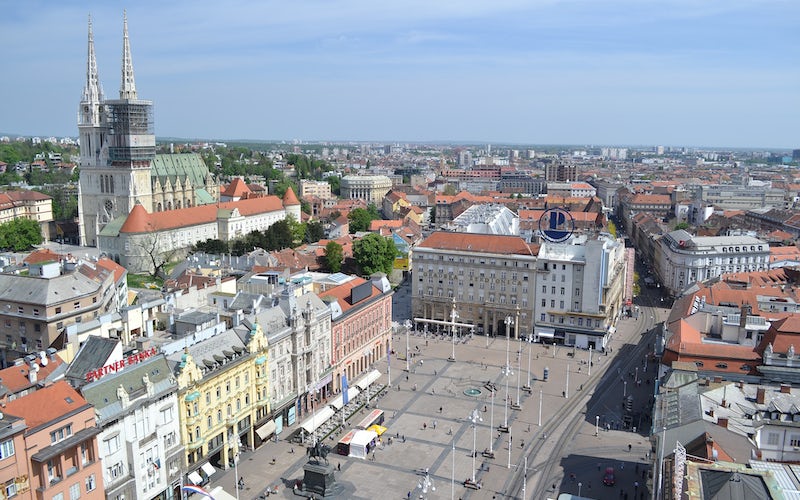 Most of what you see today dates from the 14th and 15th centuries, although the church's distinctive baroque bell tower was a 17th-century addition. All of this was restored by renowned architect and town planner Herman Bollé following the 1880 earthquake. 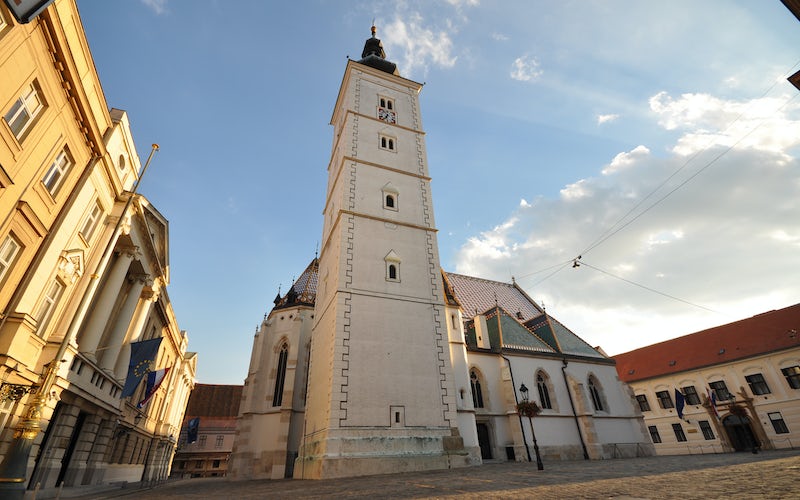 The church's tiled roof, revealed in 2009 after years of restoration, was added in the 19th century and features the coats of arms of Croatia and Zagreb. The south door, also newly restored, has a beautiful set of late 14th and early 15th-century sculptures of Christ, the Virgin Mary, and the Apostles created by Czech craftsmen from Prague. The interior features paintings by Jozo Kljakovič and a powerful "Crucifixion" by the sculptor Ivan Meštrović, who remodeled the 19th-century church features during the 1930s. 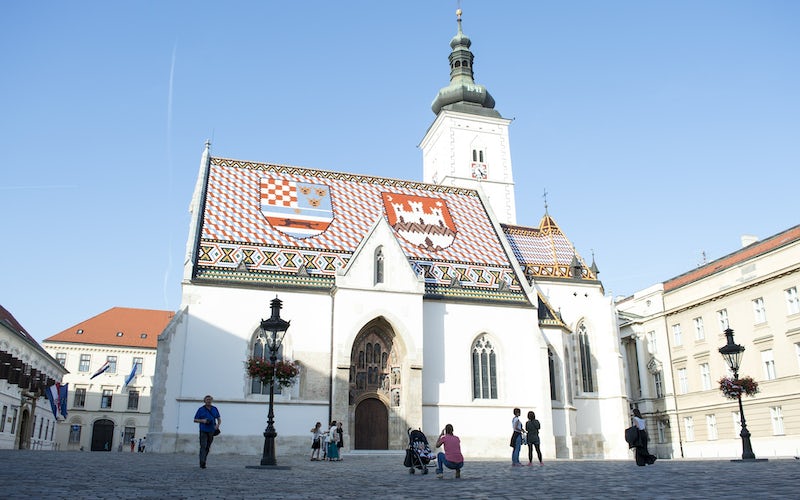 St. Mark's Square was a market in the 15th century. The St. Mark's Fair held here annually was one of the key events in city life. The imposing buildings surrounding the square include the Croatian Parliament (Sabor), on the east side of the square.

On the west side is the former Ban's Palace. The palace was hit by a Serbian rocket in 1991 while the Croatian president and prime minister were both inside, though neither was injured. On the square's south side emerges a sculpture of a head said to be that of Matija Gubec the leader of a failed peasant uprising in 1573, who was brought here by the Austrian rulers and executed by having a red-hot crown placed upon his head.

Just north of St. Mark's Square is the Meštrovic Atelier, former home and studio of the great sculptor and now converted into an outstanding museum. An enormous wooden door leads off the street into a stone courtyard dotted with sculptures. The house itself is beautifully kept and preserves much of the original furniture alongside the artist's work, from drawings and working models including a diminutive Grgur Ninski.

The studio has been converted into a light and airy sculpture gallery, with a range of works such as "Mother and Child," "Moses," and “Woman Beside the Sea" (1926). More works in the garden include "History of the Croats".

INSIDER TIP: At dusk, follow the lamplighters through the Upper Town as the gas streetlights are lit by hand. Sometimes they might even pose for photographs. 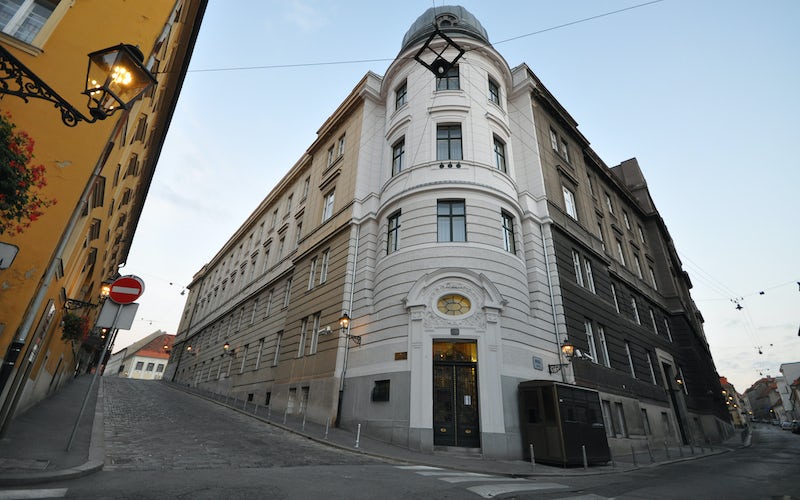 Beyond the Meštrović Atelier, Demetrova leads left to the Natural History Museum (Hrvatski Prirodoslovni Muzej). It houses extensive collections of fossils, rocks and minerals, and specimens from the botanical and zoological worlds. Back to the right is the Zagreb City Museum (Muzej Grada Zagreba), housed in a 17th-century former Convent of St. Clare. It has informative displays on the history of Zagreb from prehistory to the present day. The museum includes fragments of stonework from the original cathedral before it was damaged in the 1880 earthquake.

Past the City Museum is the so-called Priest's Tower (Popov Toranj), originally a defensive tower in Kaptol, which now houses an astronomical observatory. The street south of here is called Opatička (Nun's Street) after the former convent.

The Museum of Naïve Art (Muzej Naivne Umjetnosti), just downhill from St. Mark's, has a wonderful collection of more than 1600 works. Most of the pieces are by Croatian artists and from the school of painting. The artworks were developed at Hlebine (in northern Slavonia) in the 1930s, under such local, self-taught artists as Ivan Generalič. The museum was founded as the Peasant Art Gallery, making it one of the oldest museums of naive art in the world.

Just south of the museum is the Greek Orthodox Church of St. Cyril and Methodius. (Most of the time it is closed.)

On the opposite is Zagreb's most unconventional museum, Museum of Broken Relationships. Here, various people describe, in their own words and through donated objects, the demise of a failed relationship. At turns hilarious and heartbreaking, it is quite unlike any other museum collection you are likely to find anywhere.

On the southwest side of the church, you will find Catherine's Square (Katarinin Trg). At the far end of the square is the Church of St. Catherine (Sv. Katarina), one of the finest baroque churches in Croatia. Built by the Jesuits in the 17th century on the site of an older Dominican church, the Church of St. Catherine has an impressive altarpiece and exquisite stucco work inside. Next to St. Catherine's is Jesuit Square (Jezuitski Trg). The building along the eastern side of the square was once a Jesuit monastery. Part of it became Zagreb's first high school, or gimnazija, which is still in use today.

The building also houses the Klović Palace Gallery (Galerija Klovićevi Dvori). An art gallery for temporary exhibitions, Serbian sculptor Simeon Roksandić created the attractive fountain on the opposite side of the square.

Walk down beside the church to the large open terrace. It provides excellent views over the rooftops of the Church of St. Mary, Zagreb's Cathedral, and beyond. Descending to the south brings you onto another tree-lined terrace with the sculpture of Matos.

To the east of St. Mark's Square is the Stone Gate (Kamenita Vrata), the only survivor of the old town's four original city gates, dating from the 13th century. The reason for its survival is an altarpiece icon of the Virgin Mary, discovered in a room above the gate following a fire in 1731, miraculously unscathed. It is still here behind a wrought-iron grille, a pilgrimage site drawing the city's faithful to prayer. The interior of the gate, into which a small altar was later incorporated, is covered with votive plaques, and small candles burn in the dim interior.

There are also stories attached to the Stone Gate associating it with witches. Many of those accused of being witches were burned on St. Mark's Square during the 17th and 18th centuries. These events were immortalized by the Croatian novelist Marija Jurić Zagorka, who wrote a hugely popular cycle of novels entitled The Witch of Grič. You can find its statue on Tkalčićeva.

Near the Stone Gate, you will find a small pharmacy, which has been in operation since 1355. Beyond the Stone Gate, there is a statue of St. George vanquishing a dragon. The statue stands at the top of Radićeva, which leads down to Jelacic Square.

Toward the lower part of Radićeva, a street on the left marks the site of a particularly bloody conflict between Gradec and Kaptol in 1396. Krvavi Most means "Bloody Bridge." There is no bridge here now, but the adjacent Tkalčićeva originally marked the course of the stream (called Medveščak) that divided the two settlements of Gradec and Kaptol. It also powered a number of water mills along its course. It’s now a pedestrian street lined with cafés and small boutiques.

Across Tlaloceva from Krvavi Most, Skalinska climbs to the back of the Dolac market. Near the bottom of Radićeva on the right before Jelacic Square, is the entrance to Strossmayer Promenade (Strossmayerovo Setalište), which leads back up to Lotrščak Tower. 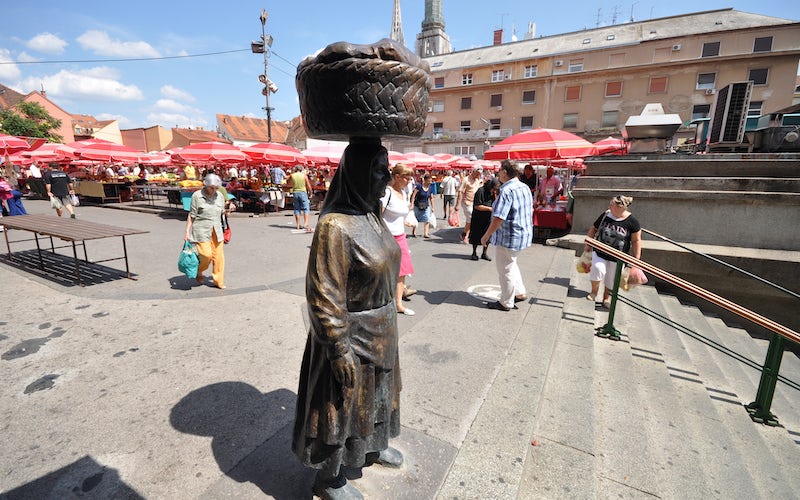 "Kumica" — A peasant woman with a woven basket on her head — Dolac Market. Flickr/Jorge Láscar.

Occupying a large terrace behind Jelačić Square, Dolac, Zagreb's main open market, is a wonderfully colorful, bustling place. The site of the medieval settlement of Dolac was cleared to make way for the market in 1925. Just west of the market, on a narrow lane leading onto Tkalčićeva, is the Church of St. Mary, formerly from the 13th century. But what survives now is mostly the 18th-century reconstruction. 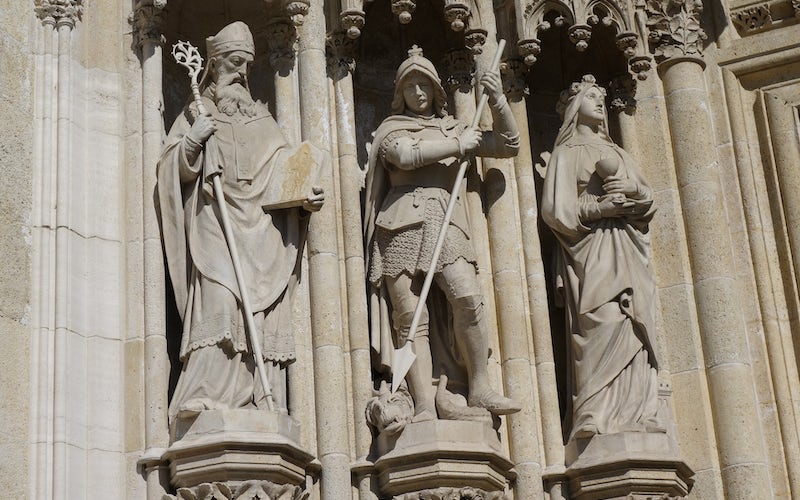 East from Dolac, at the top of the street rising from the northeastern corner of Jelačić Square, is Zagreb's imposing Cathedral. Its twin spires is a distinctive landmark that can be seen from far across the city. It was erected in the 19th century to honor the Assumption of the Virgin Mary.

Following the earthquake of 1880-which felled the neo-Renaissance bell tower, the Cathedral underwent extensive restoration under the direction of Herman Bollė. He gave the facade a complete facelift and added the neo-Gothic spires.

The Cathedral stands at the center of what was once the medieval settlement of Kaptol, the archrival of Gradec (which it actually predates) and the seat of a bishop from 1094. It is surrounded on three sides by clerical buildings, the massive round towers from the 16th century.

Adjacent to the Cathedral is the fortified Archbishop's Palace (closed to the public). It contains the Chapel of St. Stephen (Sv. Stjepan), with traces of frescoes from the 14th century. The rich collection of the Archbishop's Treasury includes the 11th-century cloak of King Ladislaus of Hungary.

In the square in front of the Cathedral is a fountain (also the work of Herman Bollė) surmounted by a tall column with a sculpture of the Virgin Mary by Anton Dominik Fernkorn.

Zagreb: the Heart of Croatia
Story