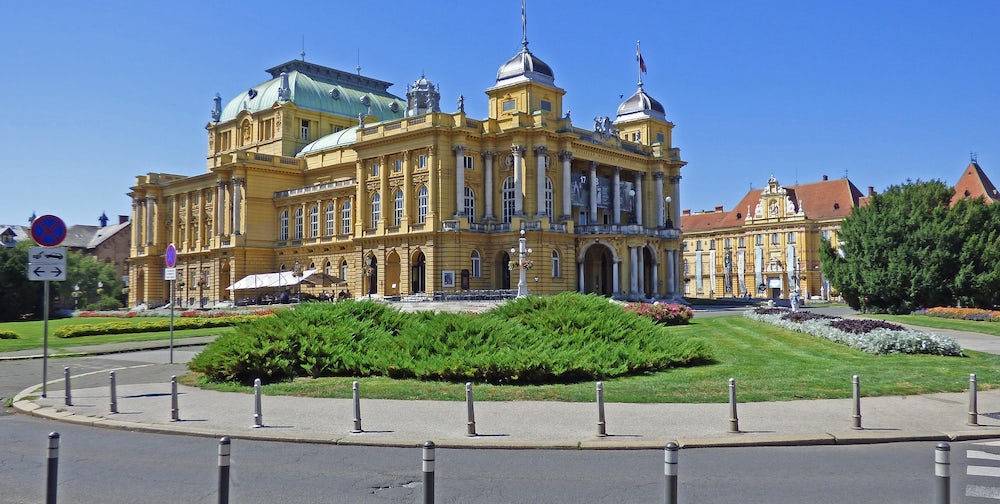 The Donji Grad District in the Historic Center of Zagreb

Wander along the lush manicured gardens of Donji Grad and take in the aromas from countless cafes lining the pedestrian streets. This is where the locals love to hang out - and probably there’s not a better place in Zagreb for people-watching.

In the 19th century, Zagreb underwent an enormously ambitious program of urban renewal following a devastating earthquake in 1880. The agricultural land south of the old city became Donji Grad, the lower town, built around an elegant string of parks and gardens that still form a "green horseshoe" through the city. The historic centers of Kaptol and Gradec were refashioned into Gornji Grad, the upper town. 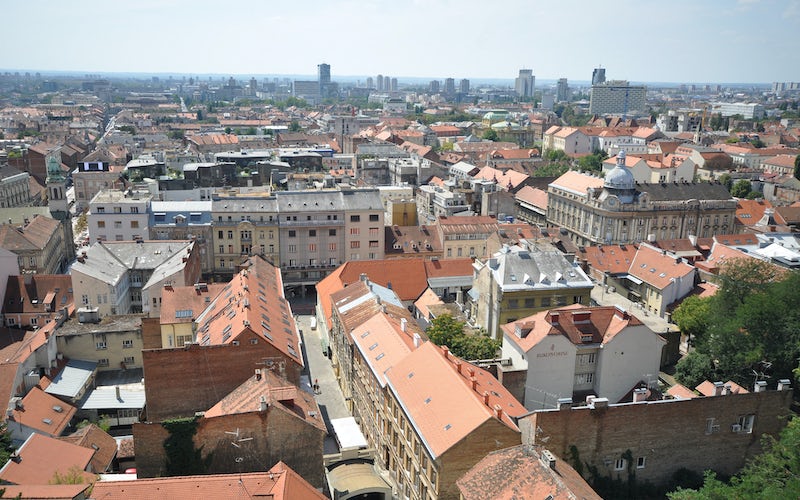 Handsome Jelačić Square (Trg Bana Jelačića), now the central focus of modern Zagreb, was actually a busy market for many years. It was called Harmica until 1854 and later moved to Dolac. The square was in a sorry state of neglect by the middle of the 20th century - even being used as a parking lot at one point. It owes its present appearance to a competition held to redesign the square in 1979. Following that, the buildings surrounding it were restored and the whole area was pedestrianized. At its center is the equestrian statue of Ban Josip Jelačić by Austrian sculptor Anton Dominik Frankum. 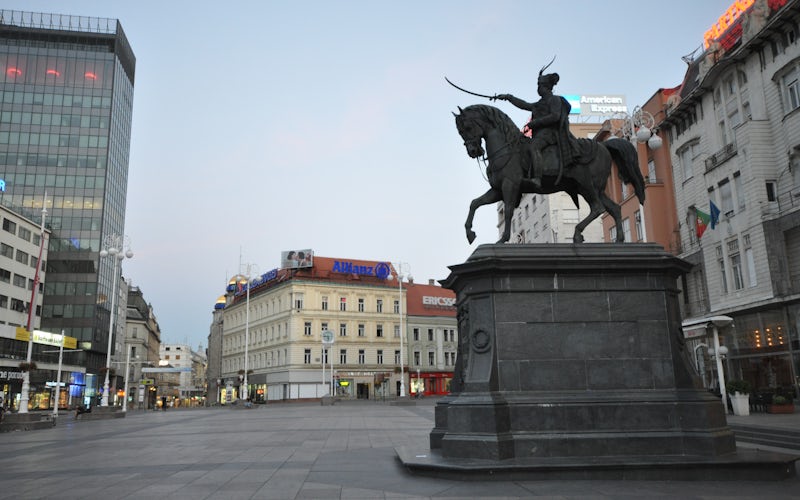 Stretching west from Jelačić Square is Ilica, which runs past the attractive British Square (Britanski Trg). You can find the site of a small vegetable and antique market, toward the suburbs of western Zagreb, and the great new modern art space, Lauba. North of British Square is the wooded area of Zelengaj.

Krleža's former home, the Villa Rein, is just across the road and is now open as the beautifully preserved Bela and Miroslav Krleža Memorial Museum, complete with antique furniture and Krleža's library. The house is one part of the Zagreb City Museum.

On the far side of Palmotićeva, is Stara Vlaška, which was the site of an orphanage and printing press that published works in Illyrian. Illyrian is the local Balkan language as opposed to German or Hungarian, the two languages that were imposed at the time. It is now the home of an atmospheric string of old shops and houses.

On the near corner of Stara Villa is a sculpture of August Senoa, a Croatian poet who was born on this street and served as a local magistrate and later a senator in Zagreb. Senoa leans against a pillar, on which is inscribed one of his poems about the city.

A few blocks southeast of here, on Square of the Victims of Fascism (Trg žrtava Fašizma), is the Croatian Visual Arts Center (Dom Hrvatskih Likovnih Umjetnika). Built in the 1930s, this large, round building designed by Ivan Meštrović holds temporary exhibitions. The building became a mosque under Tito's Yugoslavia, complete with minarets. Following the Homeland War, it is said to have been considered by President Tuđman as a possible site for his own mausoleum. 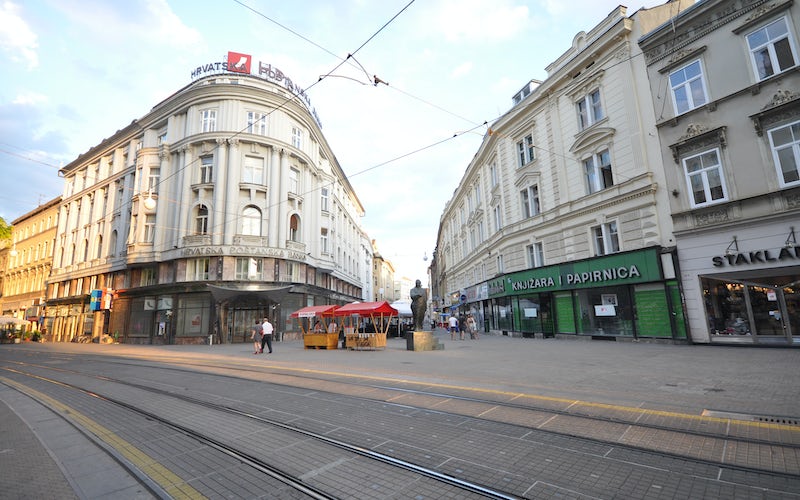 Back toward Jelačić Square, on the corner of Draškoviceva and Račkoga, is the impressive building of the Croatian National Bank. Zagreb's elegant main Post Office is located on Jurišićeva. 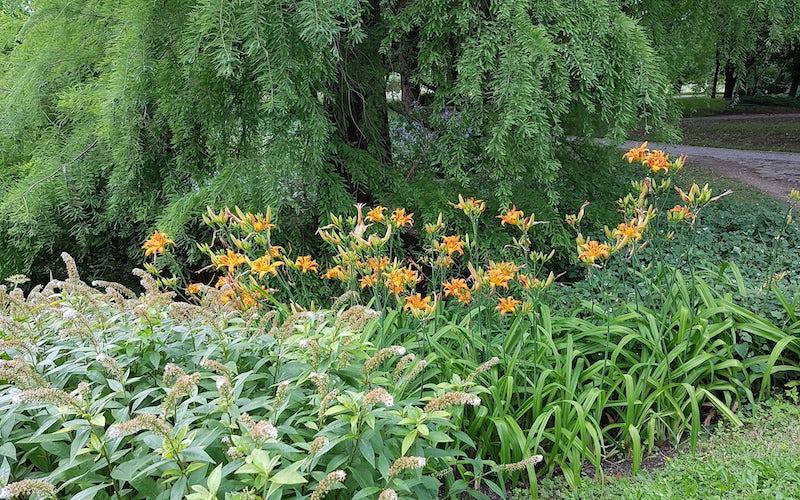 Turning south from Jelačić Square onto Praška brings you to the corner of Zrinjevac Square, the beginning of Zagreb's so-called Green Horseshoe (Zeleni Potkov). It’s a series of open, manicured green squares and parks running through the center of the city. Conceived by civil engineer Milan Lenuci following the earthquake of 1880, these parks and squares incorporated several elegant buildings, including the Academy of Sciences and Arts and the Croatian National Theatre. The "horseshoe" runs south from Zrinjevac to the main railroad station, then west through the Botanical Gardens, and north to the Republic of Croatia Square. It still constitutes an almost uninterrupted swath of green in the heart of Zagreb.

On the right side of Zrinjevac, is Zagreb's Archaeological Museum. It houses a fascinating collection ranging from the prehistoric to the medieval periods. The vast collection includes inscriptions from the ancient Greek colonies on the Adriatic coast, jewelry, pottery, and an extensive coin collection.

Among the most important holdings of the Archaeological Museum are the bronze head of a young woman from Salona (which may be a portrait of the Roman Empress Plautilla), the extraordinary Apoxyomenos statue (discovered off the coast of Lošinj), and a ninth-century inscription mentioning the Croatian prince Branimir. Behind the museum, there is a small café in the garden, surrounded by ancient sarcophagi and chunks of antique masonry.

South of the Railway Station 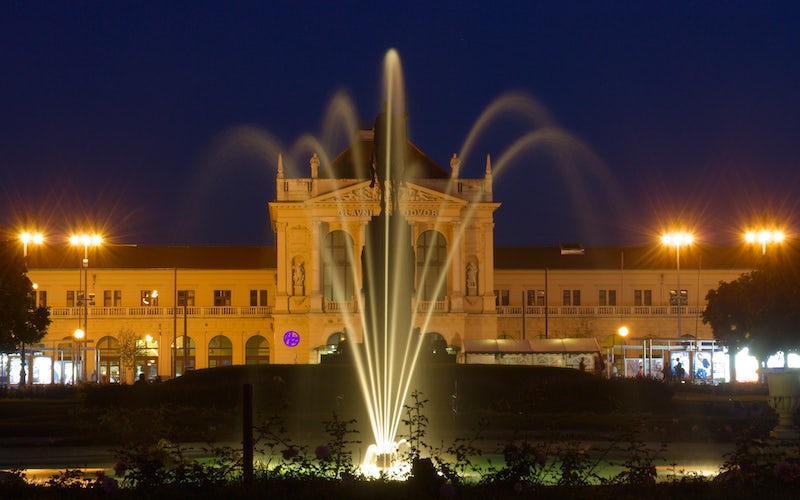 South of Zrinjevac is Strossmayer Square (Trg JJ. Strossmayera), at the northern end of which is the palatial, neo-Renaissance Academy of Sciences and Arts. The original Baška Tablet, one of the most important historical documents in Croatia is on display inside the light and spacious atrium.

Upstairs, the building houses the Strossmayer Gallery of Old Masters, which presents the work of European painters from the 14th through the 19th century. It includes pieces by the likes of Fra Angelico and Peter Brueghel the Younger, as well as a number of Croatian artists.

Located on the corner of Strossmayer Square and Hebrangova, the Modern Gallery (Moderna Galerija) is housed in a neo-baroque palace, the former home of Baron Lujo Vranyczany.

South of Strossmayer Square is Tomislav Square (Tomislavov Trg), with the secessionist-style Art Pavilion at the near end. At the far (southern) end of Tomislav Square is the immense equestrian statue of King Tomislav, Croatia's first medieval king. 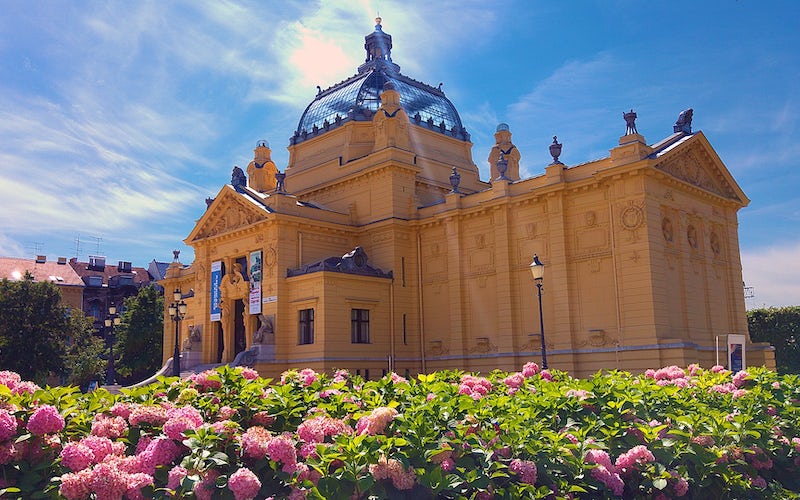 The Croatian National Theatre was designed by Hermann Helmer and Ferdinand Fellner, who together designed numerous theaters across Europe. If you get the chance, it is well worth catching a performance of opera, drama, or ballet during your stay in Zagreb. 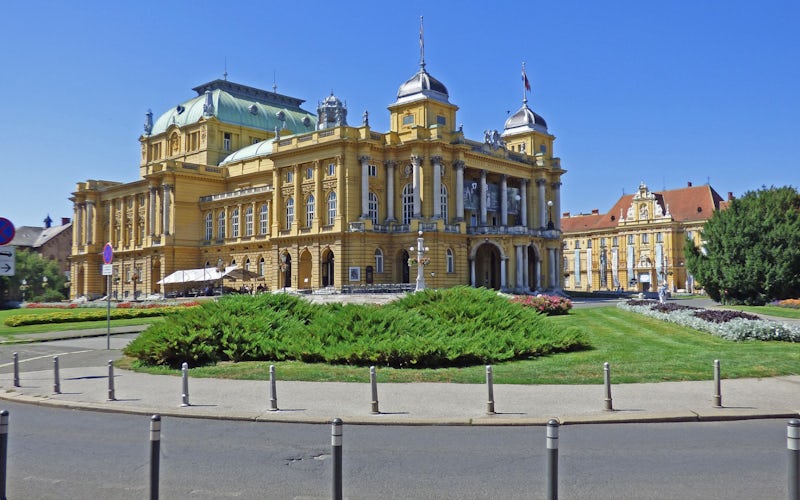 In front of the theater, you will find Ivan Meštrović's sculpture "Well of Life" (1905), dating from the period when the sculptor was exhibiting with the Vienna Secessionist Group. Just across Masarykova is a copy of one of Meštrovic's most famous works, his "Mother of the Croats” – a powerful female figure sitting cross-legged, supporting a large stone tablet inscribed in Glagolitic – which sits outside Zagreb's Faculty of Law. 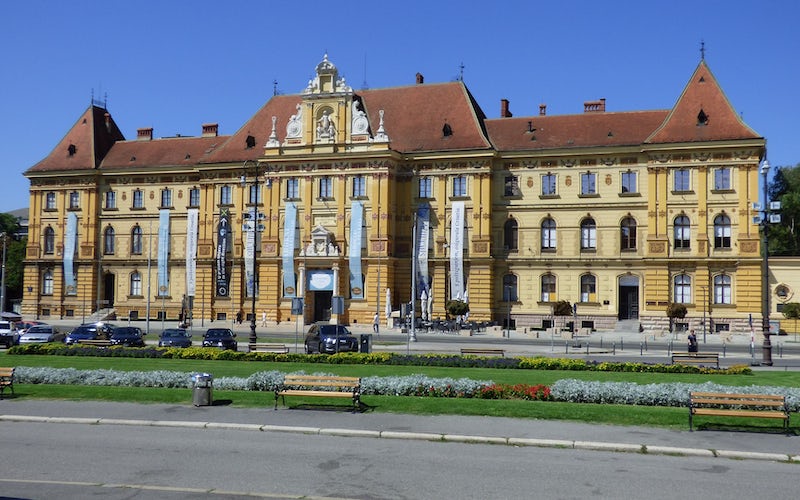 The palatial Arts and Crafts Museum (Muzej za Umjetnost i Obrt) sits on the west side of the square. On display are ceramics, glass, furniture, clocks, religious art, and textiles, drawn from a huge collection of some 160,000 objects that illustrate the development of arts and crafts from the medieval period to the 20th century.

East of the Republic of Croatia Square

Just over from the southwest corner of the square on Roosevelt Square (Rooseveltov Trg), is another sculpture of St. George and the Dragon - much more animated than the one by the Stone Gate. The huge Mimara Museum (Muzej Mimara) houses the vast collection of Croatian art collector Ante Topić Mimara. The museum has 1,500 objects on display, ranging from Persian rugs and ancient glassware to works by European masters such as Velásquez, Raphael, and Goya. 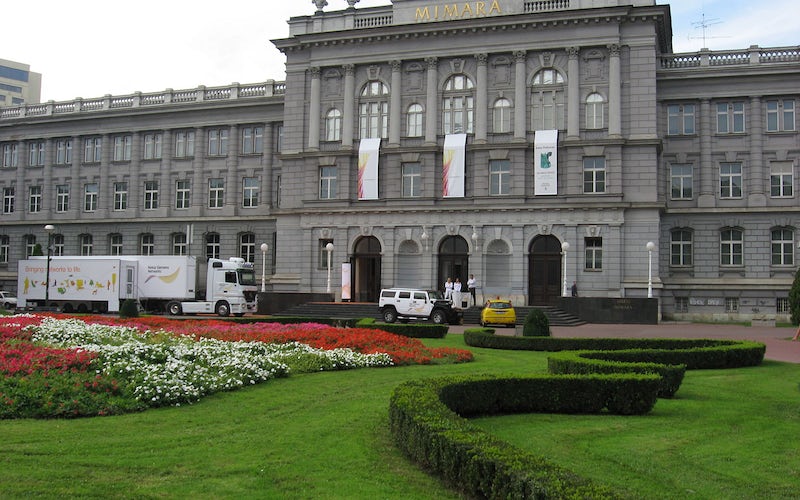 As you move east from square along Masarykova, at the corner of Preradovićeva, you’ll find a Meštrović statue of Nikola Tesla. Flower Square (Cvjetni Trg) is a large, café-filled square, one of the nicest in Zagreb and very difficult to walk through without stopping for at least a coffee. At the far (north) side of the square is a statue of Petar Preradovic – a Croatian romantic poet and officer in the Austrian military.

On the left (West) side of the square is the Europa Cinema, one of the best places in Zagreb to catch a movie. Just off one side of the square, on Varšavska, there is a statue of Tin Ujević, the much loved Croatian poet whose Bohemian lifestyle resulted in him being expelled from Belgrade on one occasion.

On the right is Bogovićeva, yet another pedestrian street lined with cafés, shops, and ice-cream parlors. You can see the sculpture "Landed Sun," another work by Ivan Kožarić. Kožaric's "Landed Sun" actually sits at the center of a series of sculptures of the planets of the solar system, installed by artist Davor Preis in recent years. All are located at the correct scale and distance in relation to a "Sun" in Bogovićeva and therefore scattered at unlikely points through Zagreb's suburbs.

Side streets leading off Flower Square and Bogovićeva often have stalls selling various arts and crafts and are a good place to hunt for souvenirs. At the far end of Bogovićeva, Gajeva leads back past the Hotel Dubrovnik onto Jelačić Square.

INSIDER TIP: Zagreb is the best place in Croatia to see street art (check out the wall along Branimirova, east of the railway station), and there are large international projects held annually.

Zagreb: the Heart of Croatia
Story