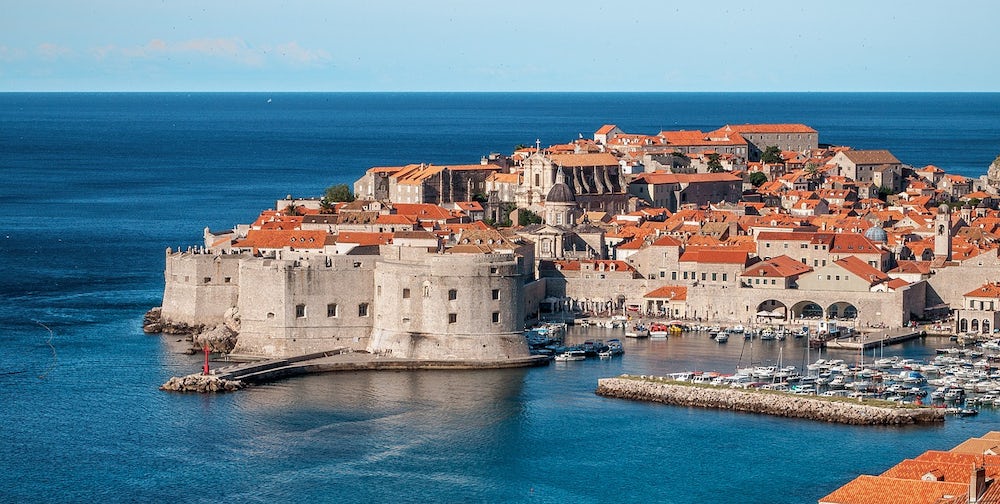 During the last decade, Croatia has emerged as one of the most sought-after travel destinations in Europe thanks to its pleasant weather and the turquoise waters of the Adriatic Sea. However, Croatia is much more than sun-and-beaches. History lovers can go back in time to countless Roman, Byzantine, Venetian, and Austro-Hungarian monuments, as well as, seven UNESCO World Heritage Sites.

The interior of the country offers kilometers of unspoiled landscapes, breathtaking mountains scenery and national parks rich in flora and fauna. On the other hand, the capital Zagreb hides numerous gems and has not yet been invaded by mass tourism. With 1244 islands and more than 2600 hours of sunshine a year, Croatia is an ideal country to try adventure sports, sample food and wines, and get lost in the lovely corners of its old streets.

With so much to see and do, it’s difficult to squeeze each of the charming destinations and activities in Croatia in an exhaustive list. However, we have done our best to pick our 9 favorite things to do while traveling in Croatia:

1. Bask on the hidden Stiniva Beach 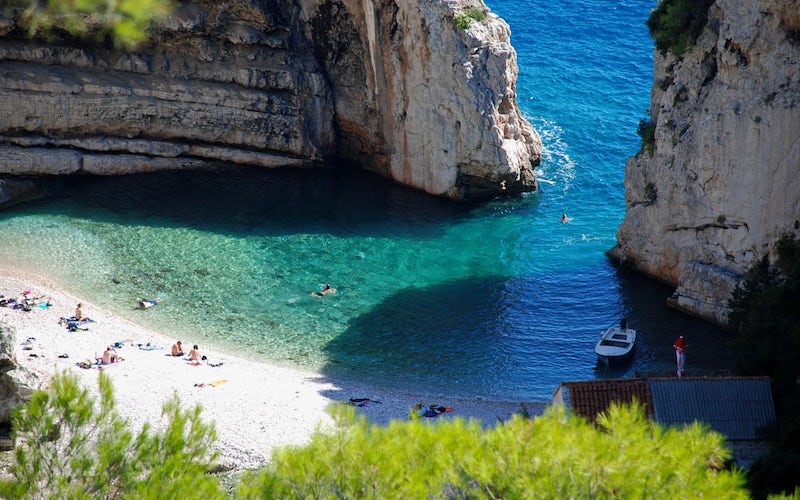 Concealed among the high-rising calcareous cliffs, this cup-shaped white-pebble beach has been voted Europe’s most beautiful beach. With crystal clear turquoise waters and surrounding wilderness, Stiniva Beach lies in absolute seclusion and tranquility. Years ago it was a hidden cove, only visited by the locals from the nearby towns, but with the tourism boom, this is no longer a well-kept secret.

Getting there is not straightforward but Stiniva’s allure makes it worth the effort. To get to the island, you have to take a two-hour boat ride from Split to the Vis Island. From the town of Vis, Stiniva cove is only accessible by taxi-boat through a narrow pass (about 5 meters), or on foot along a steep trail. There is a small bar in the bay where you can refresh yourself. Note that the beach gets a bit crowded in summers so if you’re a solitude seeker, you can consider other wonderful beaches on the island such as Srebrna, Stončica, and Grandovac beaches. 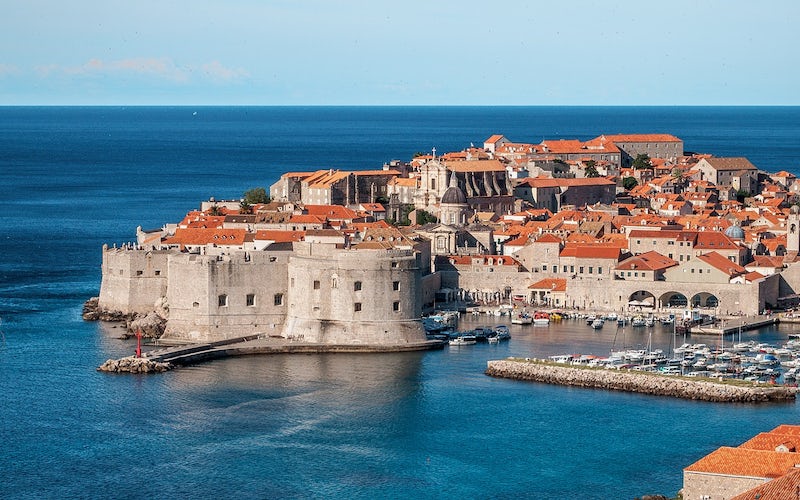 Anchored on the banks of the Adriatic Sea in southern Croatia, Dubrovnik has dozens of medieval jewels within minutes of each other. The 35-meter-tall walls of the old town of Dubrovnik offer some of the best viewpoints of the city. You can walk around its perimeter on foot. From the top of its walls, you can see the shimmering Adriatic waters on one side and the sea of ​​terracotta roof tiles on the other.

Walk through the majestic Pile Door, which is presided by a Renaissance arch with a statue of San Blas. Stop at the Onofrio Fountain, a sculpted 15th-century circular structure that supplied water to the city. Stradun is the main street of the Old Town and is one of the liveliest places in Dubrovnik. This street houses some of the most iconic buildings of the city such as Luža Square, Sponza Palace, and the Dominican Monastery. You can also find several shops, restaurants, and cafés where you can experience the true atmosphere of the city. 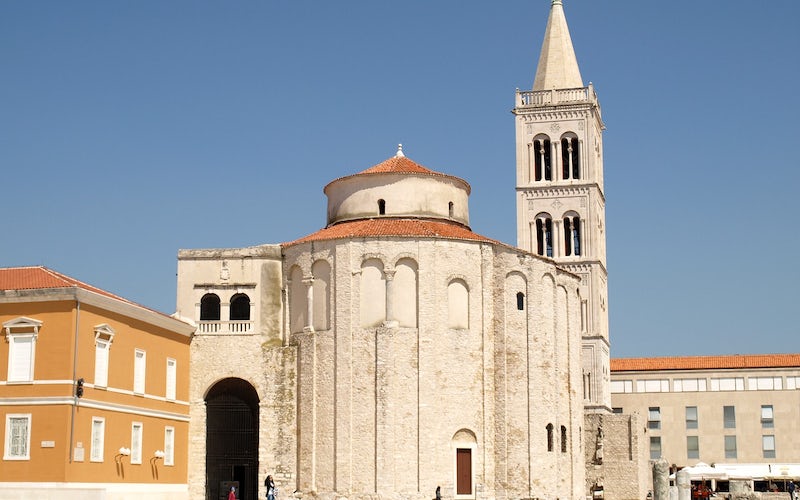 Zadar, the capital of medieval Dalmatia, is surrounded by the pine forests overlooking the sea. This is the oldest continuously inhabited Croatian city. The Romans, Venetians, Crusaders, and Ottomans - all have played a part to carve the city to its current shape. The city is separated by a canal where sailboats dance to the sound of the waves. The 9th-century church of San Donato occupies another of the historical squares of the center. This circular building, an epitome of early Byzantine architecture, has a lovely replica a few kilometers north of Zadar, on a hill near the town of Nin.

The narrow streets of the Old Town are drawn in grid and squares that preserve the city’s historical flavor. With white travertine marble floor, the Old Town is best explored on foot. The Cathedral of Santa Anastasia, built between the 12th and 14th centuries stands on a bed of Roman ruins. There are several restaurants and cafés in the area where you can order a glass of maraschino, the typical Zadar liqueur. This distillate of maraschino cherries, supplemented with sugar, almonds, and honey, is a delectable drink to accompany the passage of time while savoring the aromas of pines and algae. 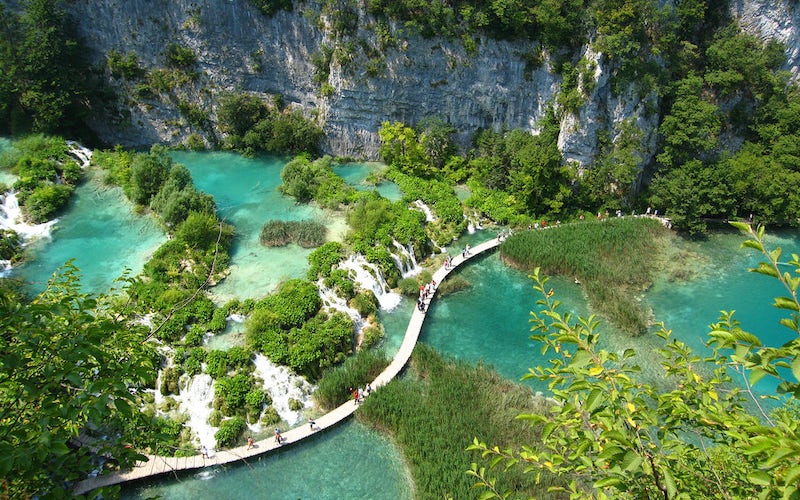 Waterfalls, turquoise waters, moss-covered rocks, shallow streams...Plitvice lakes form an ideal setting to get close to nature. There are 8 hiking trails in the park ranging from 3 to 8 hours’ duration. Each trail is marked with information signs. The wooden walkways criss-cross through more than twenty lakes, ninety waterfalls, and a dense beech forest.

The lakes were created by karst and dolomitic stones whose dissolution and erosion have created pools. The park has a range of plant and animal species including bears, wolves and several native animal and plant species. It is divided into two zones. The Upper Lakes form a set of twelve lakes with crystal clear waters while the Lower Lakes manifests the intense turquoise blue characteristic. Croatia’s highest waterfall, Veliki Slap and Šupljara Cave, the most famous cave in the park are located in the Lower Lakes area. Both sides are connected to each other by the Kozjak Lake.

5. Explore the Blue Cave of Biševo 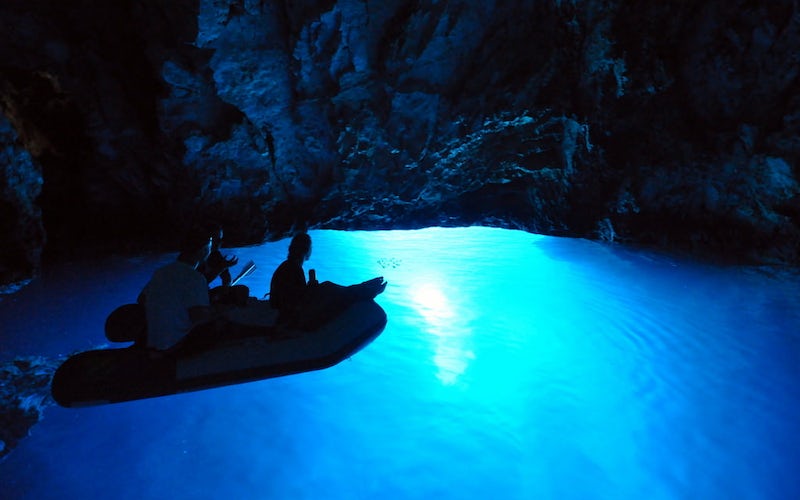 Blue Cave is located on Biševo Island next to the Vis Island. Like Stiniva Beach, this is also not easily accessible but deserves a place on this list. The cave is hidden near the fishing village of Komiza. To get there you can book a boat tour from Split. Biševo is composed mainly of limestone and has 26 caves spread across the island. The Blue Cave is characterized by its bright blue color that stems from the reflection of sunlight from the limestone bottom. Note that you can’t stay in the cave for more than 10–15 minutes. So if you are looking for a place to swim and relax, this is not the one.

6. Experience the culture of Split 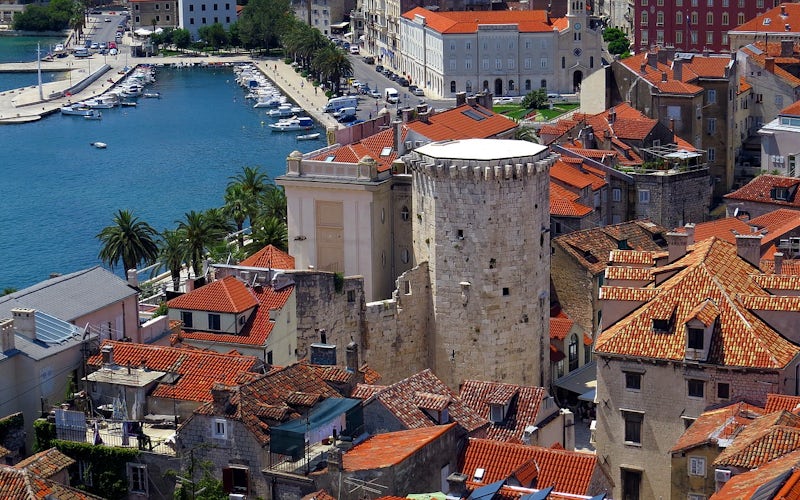 The Roman emperor Diocletian built the old town of Split and left his impressive marks on the city. Step inside the UNESCO World Heritage Site, Diocletian's Palace to discover the pleasing blend of the ancient and the modern. The labyrinth of streets, which shapes the heart and soul of Split, has an alluring vibe at every corner. It is not uncommon to stay in a hotel room with Roman architectural elements. Getting lost in the narrow streets and passages is one of the most evocative experiences in Split, and the place is small enough to easily find the way again. Visit the city’s bustling market and sample fried fish with white wine in a konoba (traditional Croatian restaurant).

Between arches, rows of columns, courtyards, and cellars supported by marbles from the Roman times, you can find bars, cafes, and souvenir shops scattered all over. Looking around, it is easy to understand that the city needed to tear down the walls of the palace to expand when its status as a commercial port became strategic. This finally happened in the fifteenth century.

Beyond the walls of the palace, Riva is a sea-facing promenade and a pedestrian haven. This is an ideal place in the city to grab a coffee on a sunny morning and watch the people go by. If you are lucky, you can even catch a live cultural event at Riva. Split Summer Festival is organized between 15th July and 15th August and hosts operas, performances, and concerts. 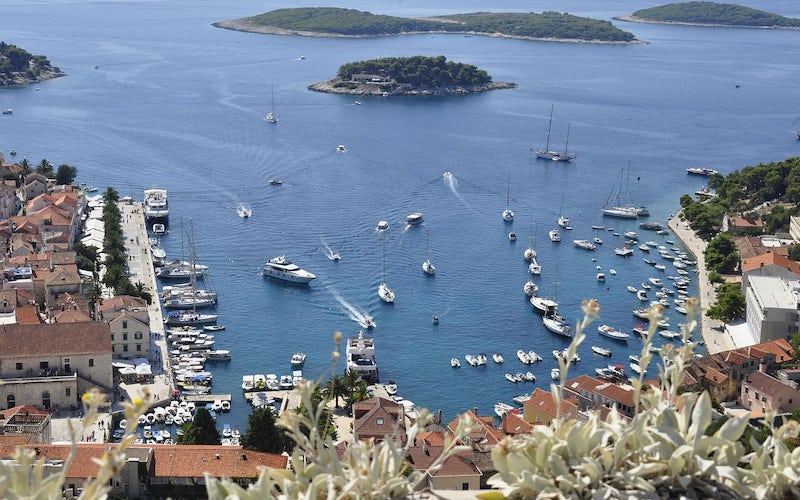 Hvar is an elongated island known for its vines, craggy peaks, ancient hamlets, lavender bushes, and olive, fig, and almond trees. The violet colored meadows of the island’s eternally-scented interior can make itself apparent to even the blindfolded.

The island’s capital bears the name, Hvar. Its winding streets, with marble floors and buildings, combine the Gothic and Renaissance styles. Sit on a terrace in the Plaza de San Esteban and explore the Cathedral of San Esteban. Take a short hike to Spanjola Fortress and enjoy the spectacular views of Hvar from above. At Franciscan Monastery, you will appreciate the well-preserved ancient artworks. Hvar is a lot more than history, culture, and nature. After sunset, the town transforms into a lively party place.

In the north, Stari Grad is lesser known but offers a laid-back atmosphere. It’s the perfect place if you want to have the same cultural experience without the parties and hustle of Hvar town. Stari Grad means “Old City” and it is considered to be the oldest human settlement in the Adriatic Sea. 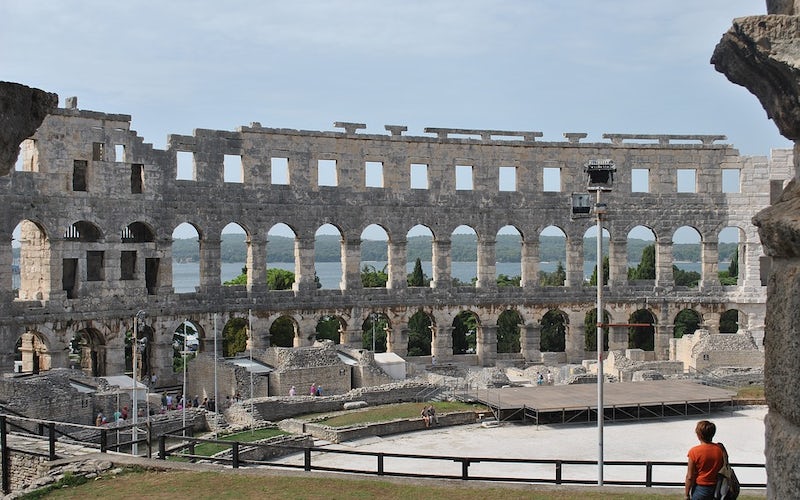 Among the many Roman remains that exist throughout the city, the brilliantly preserved amphitheater of Pula is the most impressive. Located in the heart of the city, it is the favorite host of Pula’s cultural events: from film screenings and concerts to food markets and festivals. Even without attending an event, the 20,000-seater circular amphitheater is worth visiting.

Pula is often overlooked as a travel destination due to the larger cities like Zagreb and Split. However, it holds a friendly small-town charm with a hint of Italian culture and cuisine. If you are into non-touristy destinations, get to Pula before the whole world does!

9. Walk through the walled city of Trogir 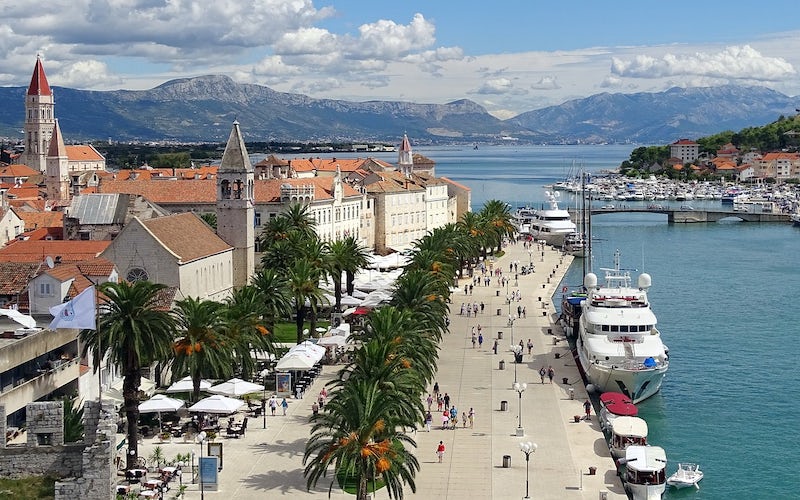 Trogir is another small walled city that boasts a fascinating range of buildings and historical monuments. It has been ruled by the Greeks, Romans, and Croats but the Venetians have left a deeper impression in its culture and architecture. Cross the double walls to enter the Old Town, where you can see the relics of the Venetian government, such as the representation of the winged lion of San Marcos, a symbol of the Republic of Venice.

Head towards the western end of the city and visit the Kamerlengo Castle, a Venetian defensive citadel that was once inside the walled city. Explore the other historical monuments such as the Town Hall, Grand Cipiko Palace, Terra Firma Gate, and Cathedral of San Lorenzo. This Venetian church stands out for its magnificent Romanesque portico and an interesting collection of carvings, paintings, and sculptures.

The Mediterranean fantasy of living warm days next to sapphire-colored waters in the shadow of ancient walled cities becomes a reality in Croatia. Are you ready to book your tickets?