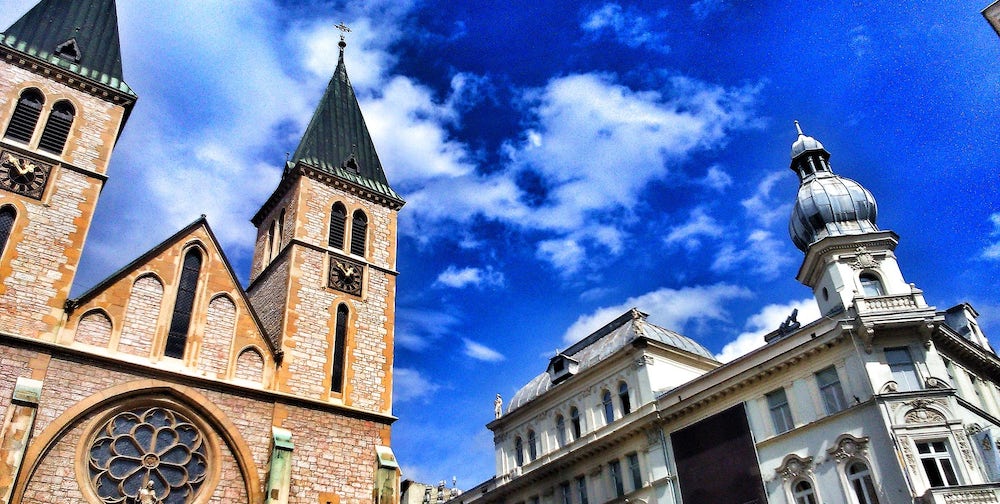 If you are still having doubts about whether you should visit Bosnia and Herzegovina and where you should go once there, check out this article.

Bosnia and Herzegovina is a small country in southeast of Europe, establishing itself as a new tourist destination in this corner of the world. With plenty of opportunities and diverse attractions, it will certainly satisfy and cater for the needs of all sorts of travelers.

Lonely Planet said that “craggily beautiful Bosnia and Herzegovina is most intriguing for its East-meets-West atmosphere born of blended Ottoman and Austro-Hungarian histories” and that “visitors will likely remember the country for its deep, unassuming human warmth, its beautiful mountainscapes and its numerous medieval castle ruins”. Although it lacks in beach resorts, it easily compensates with cascading rafting rivers, waterfalls and bargain-value skiing in its mostly mountainous landscapes. 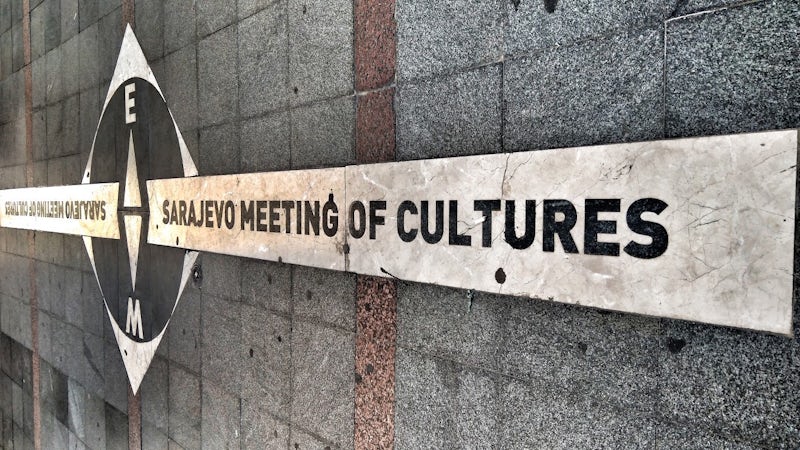 The country’s capital Sarajevo is a logical, number one choice when traveling to BiH. Not only due to the fact that it's the capital city but because it is sort of a city one has to see at least once in a lifetime. It is a magical blend of the old world and the new, of the East and the West, of the traditional and urban, and owing to its religious and cultural diversity is sometimes dubbed as "Jerusalem of Europe". 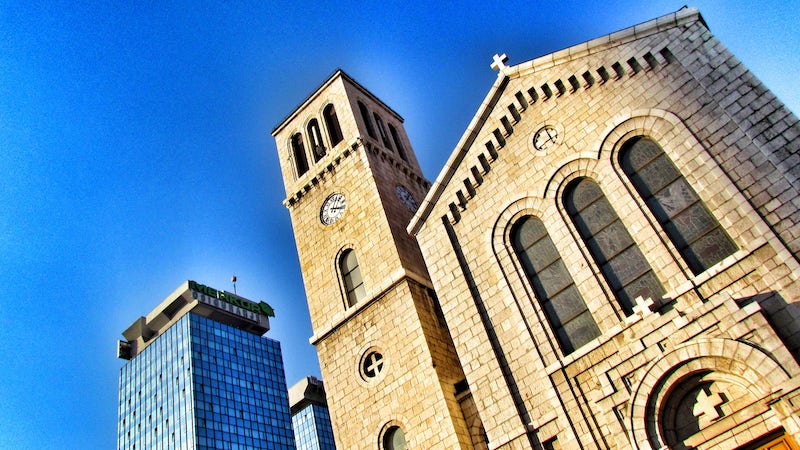 A Roman Catholic Church from early 1900s next to the tower of a business building. Wonderguide/Lejla. 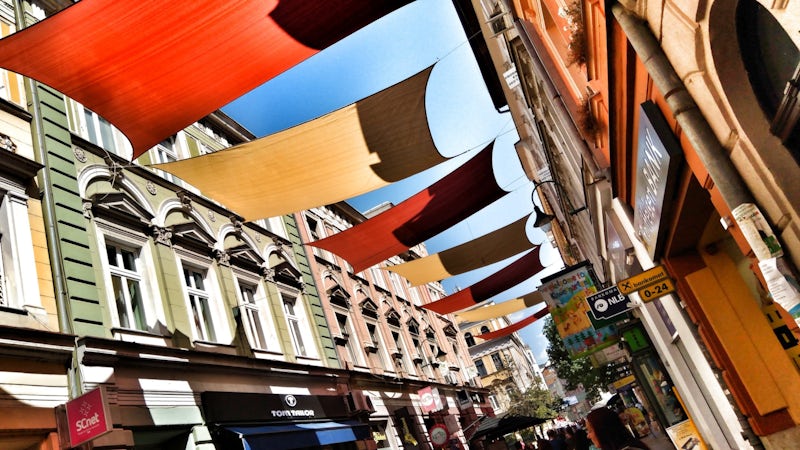 While in Sarajevo, take a stroll down Ferhadija Street (pedestrians only) and Titova Street, where you can notice strong influence of Austro-Hungarian architecture or some of the most beautiful works of that period. To name a few: the Sacred Heart Cathedral, designed by the Viennesestudent Josip Vancas and built in neo-gothic style, the Markale City Market building, designed by August Busch, the Main Post Office, also designed by Vancas, the National Theater building, etc.

The Sarajevo City Hall is one of the city’s landmarks and a must-see for any tourist visiting Sarajevo. Besides its rich history, the building’s interior and exterior will catch attention even of those less interested in architecture or history. An interesting fact about this national monument is that it was completely destructed in 1990s war but its pseudo-Moorish style was fairly preserved during the restoration.

The City Hall was reopened in 2014 and entrance fee amounts to EUR 2.5.  Other historic buildings worth of seeing are the Academy of Fine Arts, the Gazi Husrev Bey’s Mosque, the Ashkenazi Synagogue, the Emperor’s Mosque, the Congregational Church of the Holy Mother, the Monastery of St. Anthony of Padua, the Old Jewish Cemetery, and many other you will come across if you explore the city on foot. Most of these buildings can be visited free of charge. 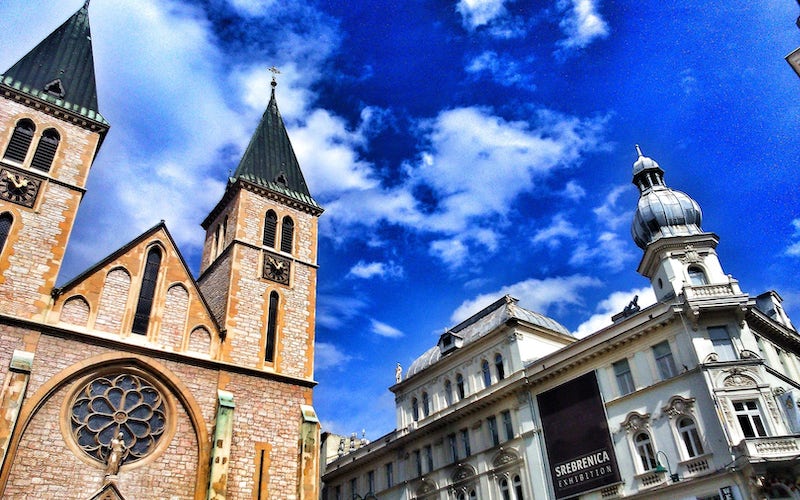 The Sacred Heart Cathedral, built in late 19th century, is the largest cathedral in BiH. Wonderguide/Lejla. 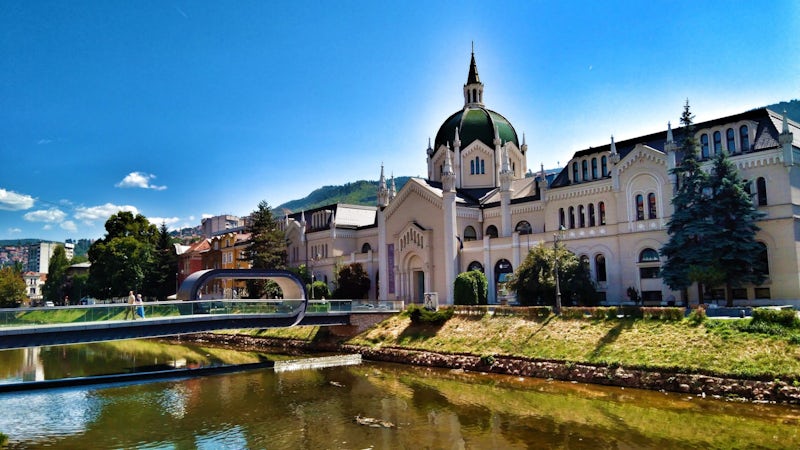 The Fine Arts Academy’s building was the first and only evangelistic church during Austro-Hungarian period. Wonderguide/Lejla. 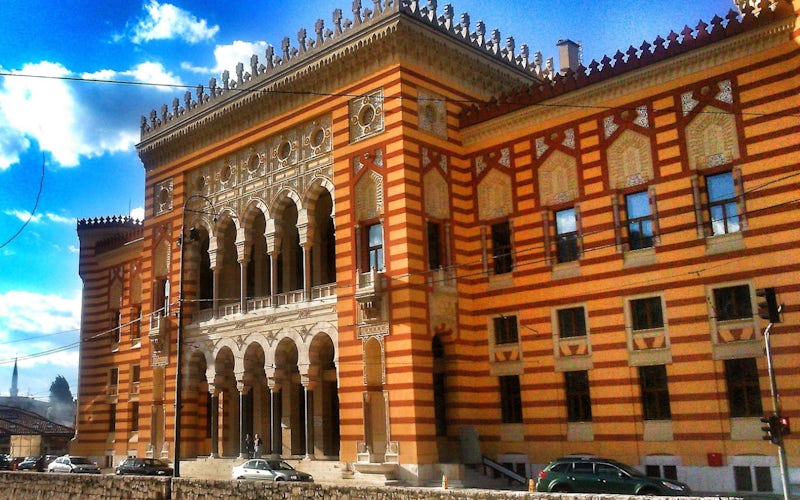 The City Hall of Sarajevo was initially opened in 1896 and handed over to City Administration until 1949 when it turned into the National and University Library of BiH. Wonderguide/Lejla. 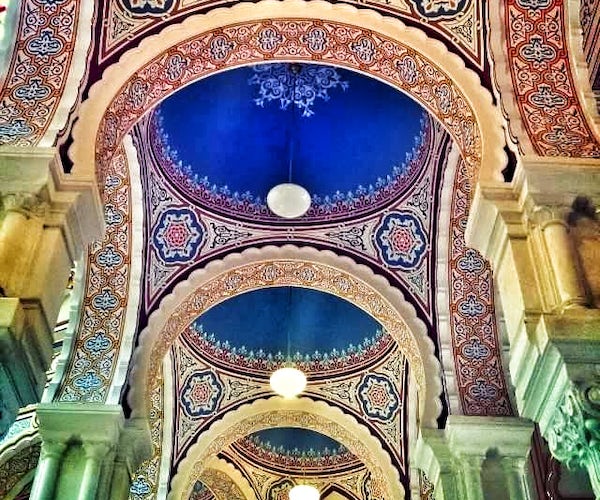 The interior of the City Hall. Wonderguide/Lejla. 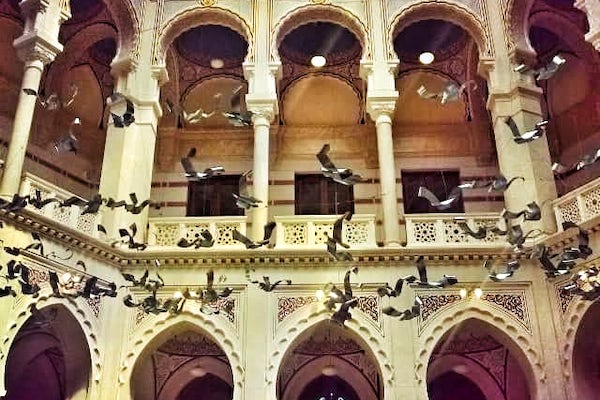 The work of skilled artists on the interior arches of The City Hall. Wonderguide/Lejla. 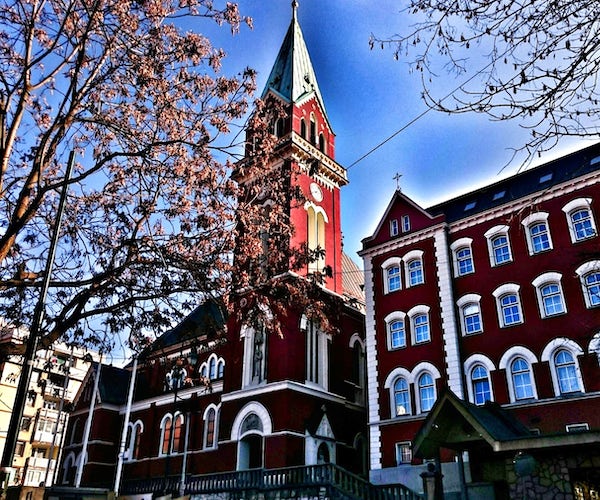 The Church of St. Anthony of Padua, a national monument of BiH. Wonderguide/Lejla.

Oriental and Ottoman-era architecture is nothing less represented in the city. The Old Bazaar (Bascarsija), built in the 15th century, used to be known as the largest trade center of that part of the Balkans and today it is a historical center of Sarajevo, home to traditional craft production and traditional cuisine of the country. While there, take a 10-minute walk up the hill where you will reach the Yellow Bastion, one of the best viewpoints of Sarajevo. The Old Bazaar is also a place where many tourists get their souvenirs. Feel free to negotiate with a seller for cheaper price, sometimes it works. 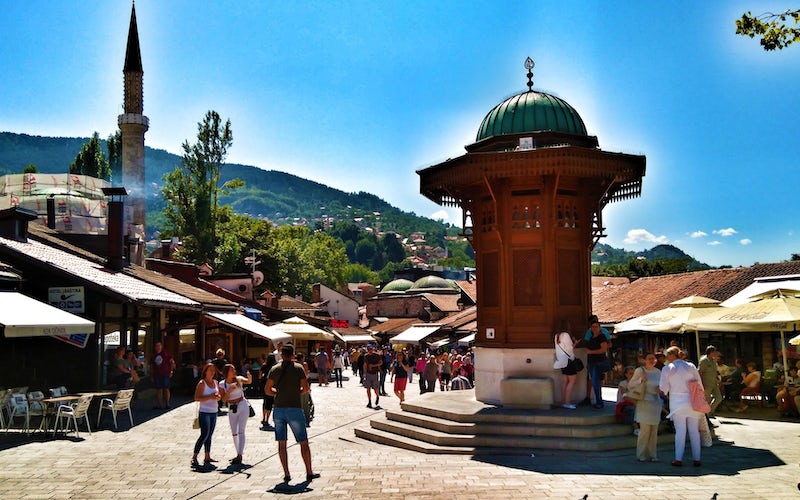 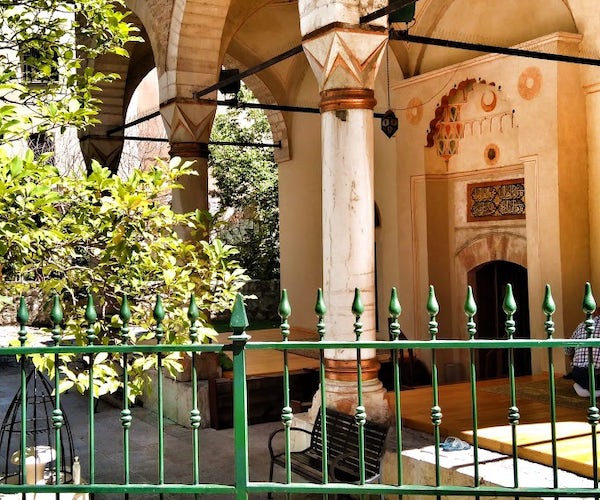 A random mosque in old part of city, remains of Ottoman architecture. Wonderguide/Lejla. 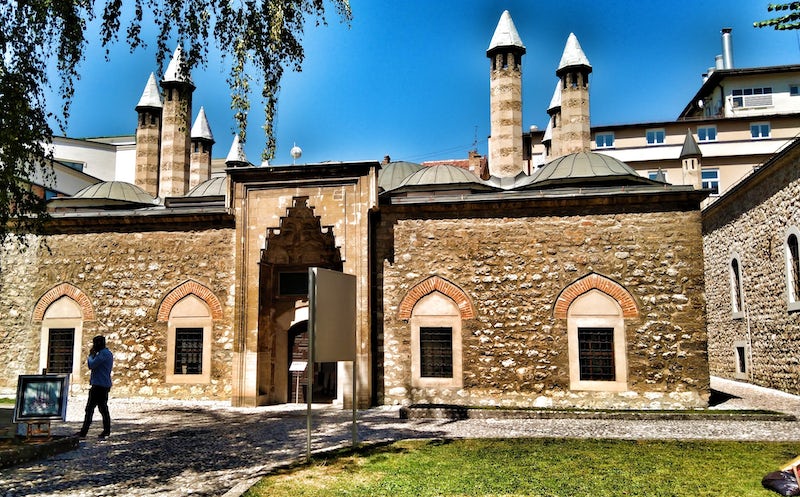 Gazi Husrev Bey’s Museum (Library), founded in 1537, holds one of the most important collection of Islamic manuscripts in BiH. Wonderguide/Lejla.

The bridges of Sarajevo deserve a separate paragraph, because they all have their own interesting story. We will tell you a few. The Latin Bridge is the the best known of all. It is the spot where Archduke Franz Ferdinand and his wife, Sofie, were assassinated – which changed the history; it led to the fall of Austro-Hungarian Monarchy and to the start of the WWI. The Bridge of Suada and Olga was named after two of the first civilian victims of the 1990s war. The Eiffel’s Bridge is also known as the Steel Bridge. There is a story that indicates that the bridge was constructed by famous Alexander Eiffel, although there is no written document confirming this claim. The Festina Lente Bridge is the youngest among the bridges on Miljacka River. It was designed by students of the Fine Arts Academy, whose aim was to create a new symbol of the city. 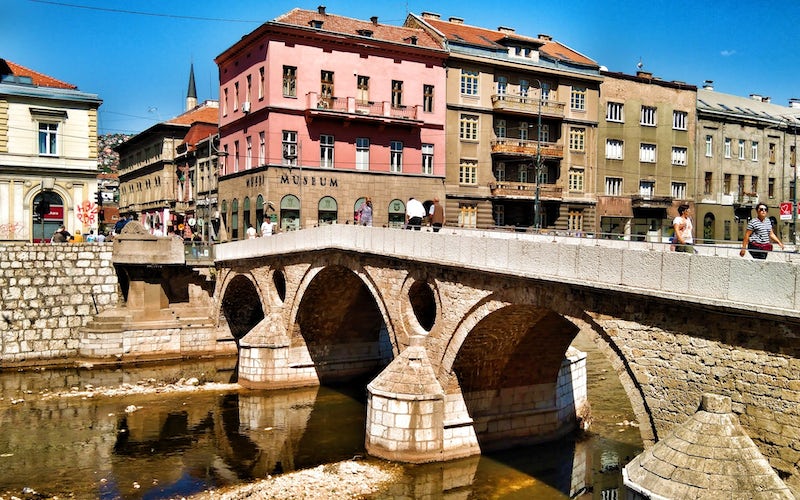 Museum lovers will find a lot to see in Sarajevo. The Historical Museum of BiH, covering entire history of BiH with its exhibitions; the National Museum of BiH, which is home to the famous Sarajevo Haggadah, Bosnian Stecak (medieval tombstone) and a beautiful botanical garden with more than 3,000 types of plants; the Ars Aevi Art Depot, which is believed to have one of the most important collection of modern art in the Southeast Europe; the Despic House, belonging to the Despic family, which served as a precursor to the city’s modern theater with the first theatrical performances in the city; the Museum of Literature and Performing Arts, also originally owned by the Despic family, and today it is home to 67 literary and 17 theater-related collections with more than 20,000 items; the Sarajevo Brewery Museum, placed within the Sarajevo Brewery which was founded in 1864, and its displays contain interesting items that have been collected over the past 150 years; the Gallery 11/07/95, is a memorial gallery symbolically named after the Srebrenica genocide date, and it provides documentary-artistic interpretation of events that took place back in 1995.

There are also the Museum of Sarajevo, the Brusa Bezistan, the Gazi Husrev Bey’s Museum, the Jewish Museum of BiH, the Old Orthodox Church Museum, etc. Fees for all museums range between EUR 1.5-EUR 3. 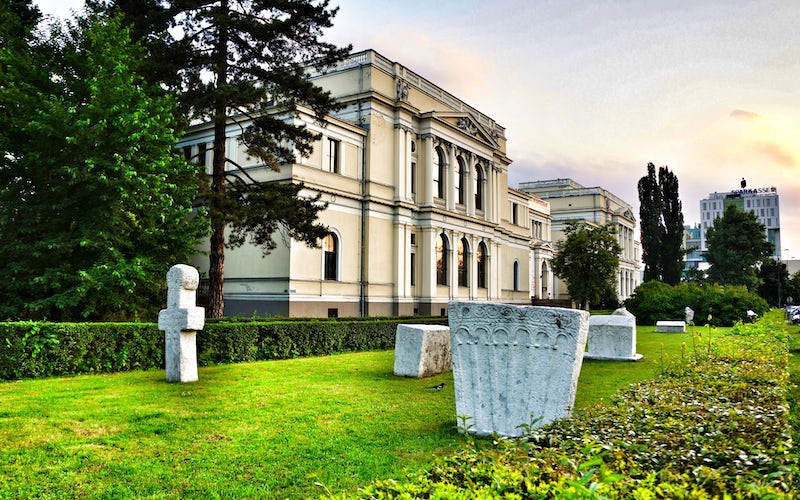 The front side of the National Museum with replica of ‘stecak’ in front of it. Wonderguide/Lejla. 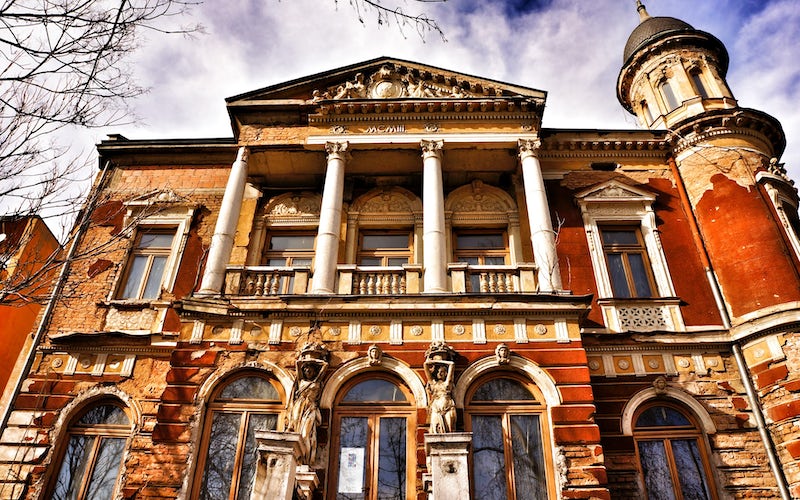 The Museum of the 14th Olympic Games, which officially opened in 1984 was one of the first cultural buildings that was destroyed in the 1990s war. Wonderguide/Lejla. 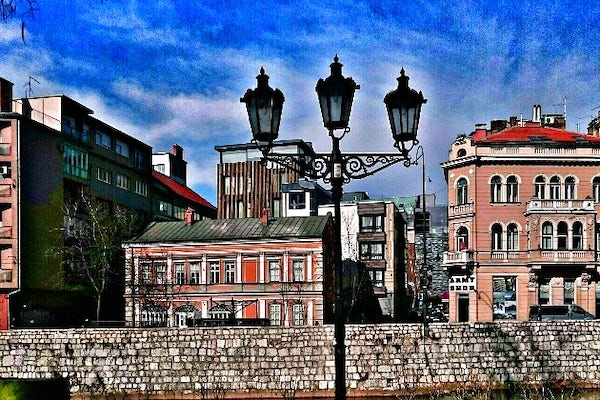 The Despic House – the venue for the city’s first theatre performances. Wonderguide/Lejla.

Sarajevo offers a lot for outdoor and adventurous travelers too. Its nearby mountains, suburban settlements, parks and hills are perfect for weekend trekking tours, picnics or just long walks.

To name a few locations: the Great Lane and the Spring of Bosna River, only 15 kilometers from the city center; the Skakavac Waterfall, 12 kilometers away from Sarajevo, 75-meters high waterfall hidden in the Perucica forest, one of the last remaining primeval forest of Europe; Dariva, one of the city’s oldest walking paths; the Wilson’s Promenade, the walking avenue in the city center; and finally, any of the Olympic mountains surrounding the city, which are 45-minutes car ride or less away from the city center. 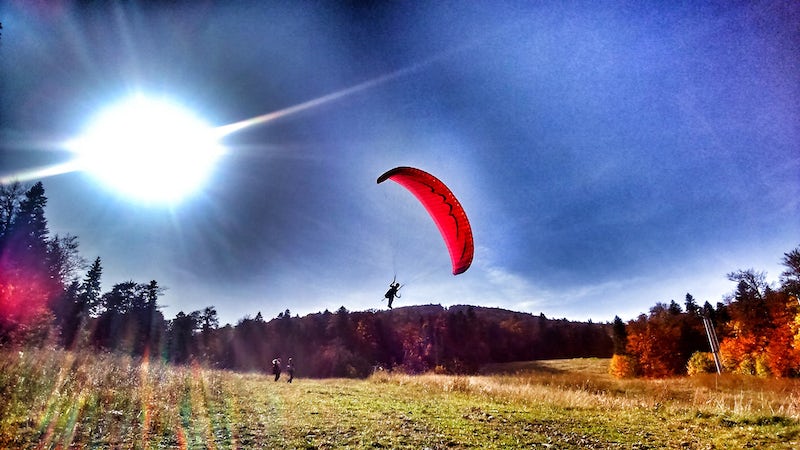 The second most visited city of BiH is Mostar, which is located in the south of the country, is just a 2-hour car ride away from the capital. Its most famous landmark, the Old Bridge and the old town area are inevitable attractions for Mostar visitors. Other locations worth visiting in the vicinity of Mostar are Old Town Pocitelj, the Spring of the Buna River in Blagaj and the Kravice Waterfalls. 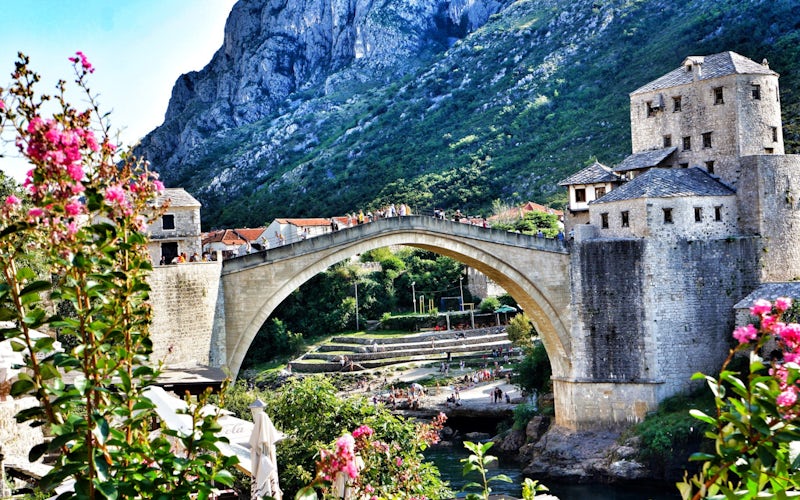 The 16th century Ottoman bridge, a symbol of Mostar. Wonderguide/Lejla. 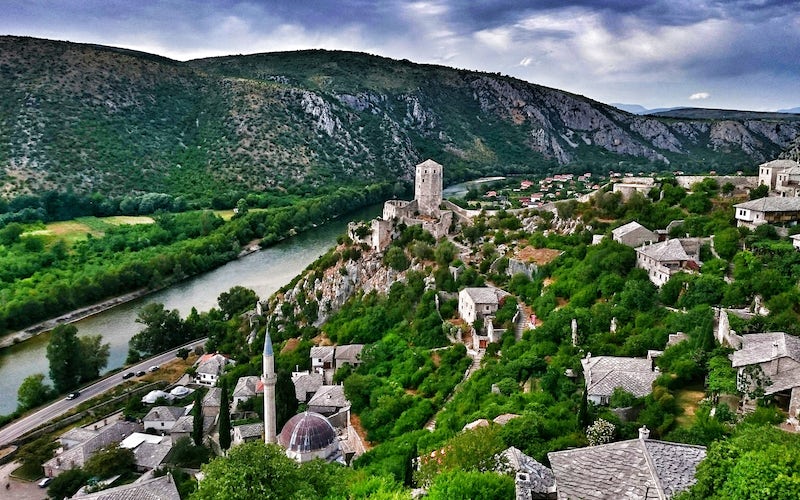 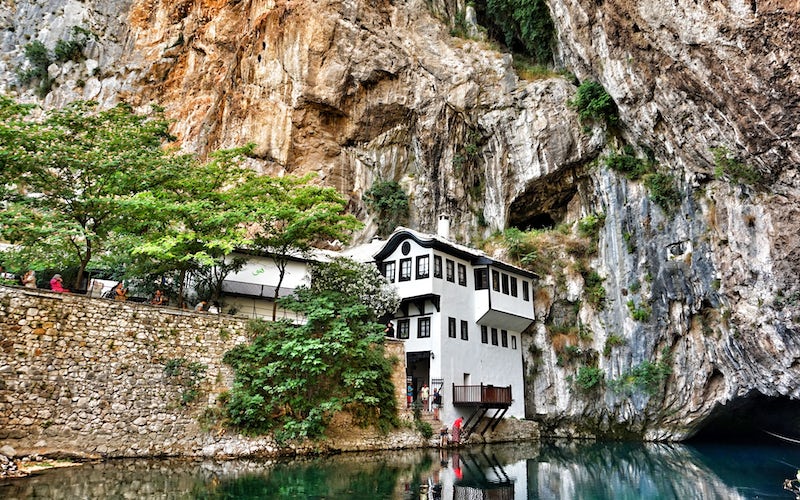 A magnificent view of the Buna River Spring from a karstic cavern beneath a vertical cliff. Wonderguide/Lejla. 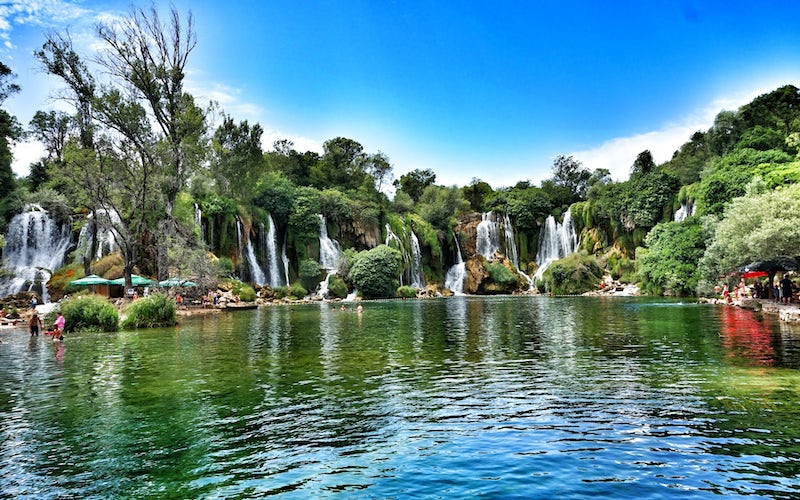 One of the green oases of Herzegovina, the Kravice Falls. Wonderguide/Lejla.

Trebinje, the southernmost city in BiH, which is only some 20 kilometers away from the Adriatic coast, is a real gem that is no longer considered to be hidden. This Mediterranean-continental town attracts visitors with its unique landscape, original Herzegovinian cuisine and great selection of traditional and autochthonous wines. 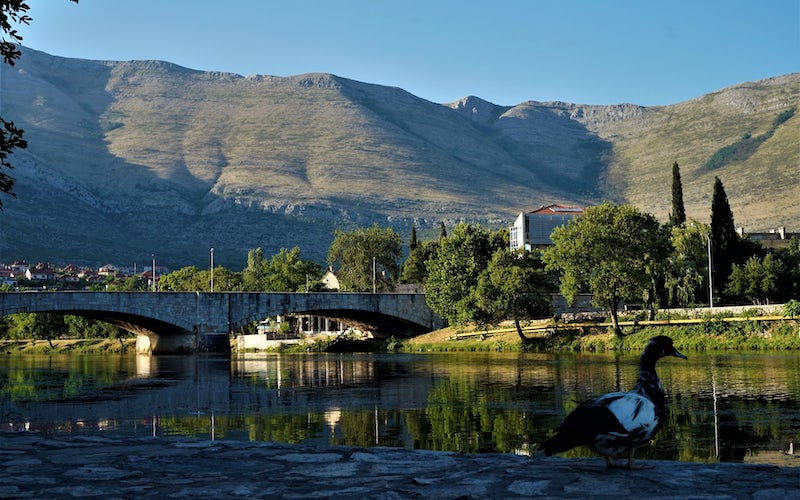 Calm waters of the Trebisnjica River passing through Trebinje. Wonderguide/Lejla.

Also known as the Royal Town or Bosnia’s Open Air Museum, Jajce is a centrally located Bosnian town, 2.5-hour car ride away from Sarajevo. It is home to a fortified Old Town, idyllic Pliva lakes, and a 21-meters high waterfall. Jajce is perfect destination for nature lovers and outdoor types, with over 50 kilometers of bike paths in natural landscape, numerous mountain trails, and a beautiful lake for fishing or kayaking fans. 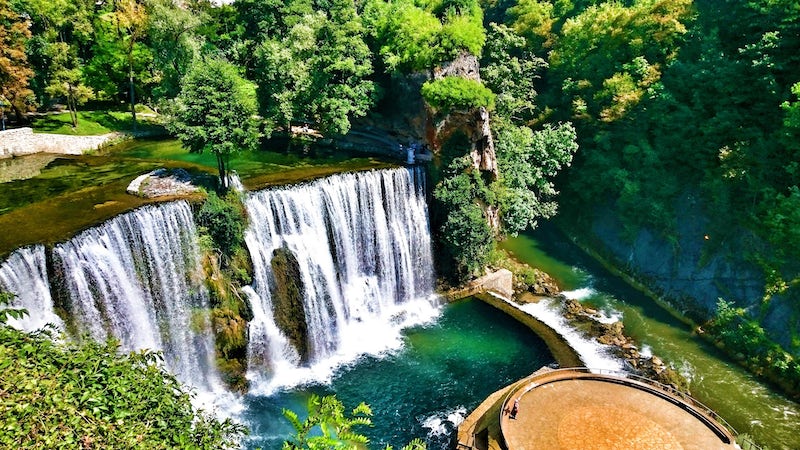 The place where the Pliva River meets the Vrbas River, and one of the most notable features of the town. Wonderguide/Lejla.

Situated on the banks of the Una River, which is said to be one of the cleanest rivers of Europe, Bihac is the north-westernmost town of BiH. It is a great place to make a break on the way to Adriatic coast or the Plitvice National Park (Croatia), but lately it has started to attract large number of tourists due to its vicinity to one of three national parks of BiH – the Una National Park and numerous events organized in the area during the summer (Una International Regatta, International Cycling Tour, etc.) 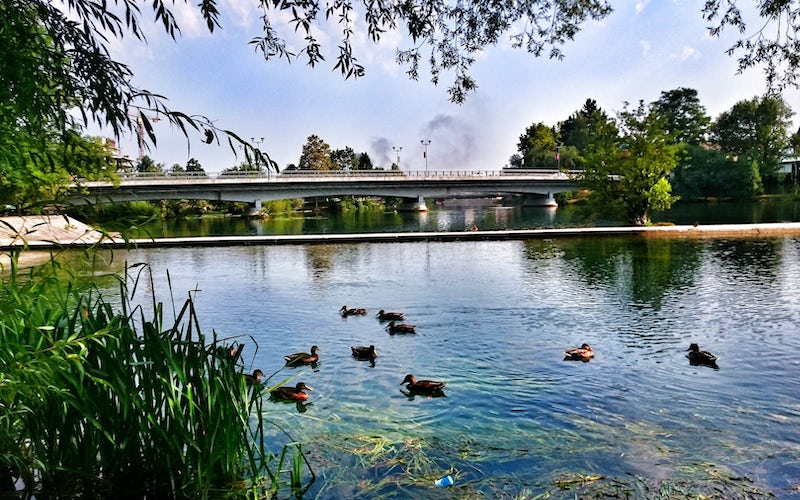 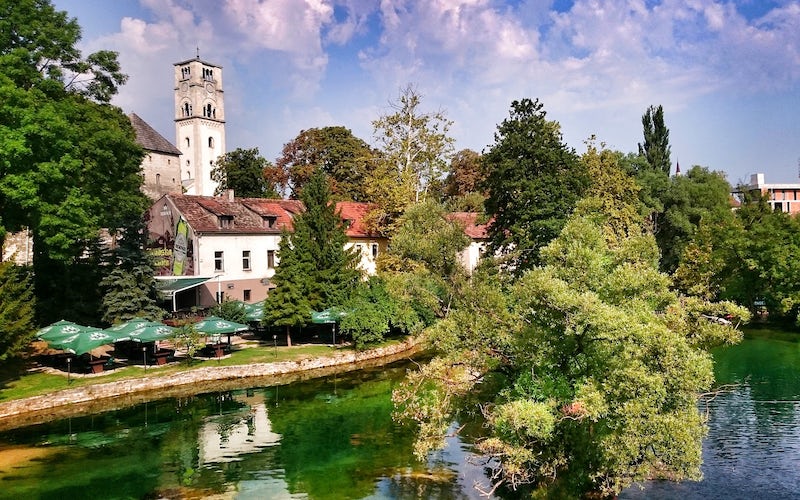 The  Church of St. Anthony is one of Bihac's landmarks. Wonderguide/Lejla.

Banja Luka is a beautiful town in the north of BiH, surrounded by green hills and divided in two parts by the Vrbas river. Banja Luka amazes tourists with the 15th century fortress known as Kastel and the Vrbas canyons. It is also known for some of the best open-air music festivals in the region – Fresh Wave Festival, Kastel Rock Fest, Demofest and so on. 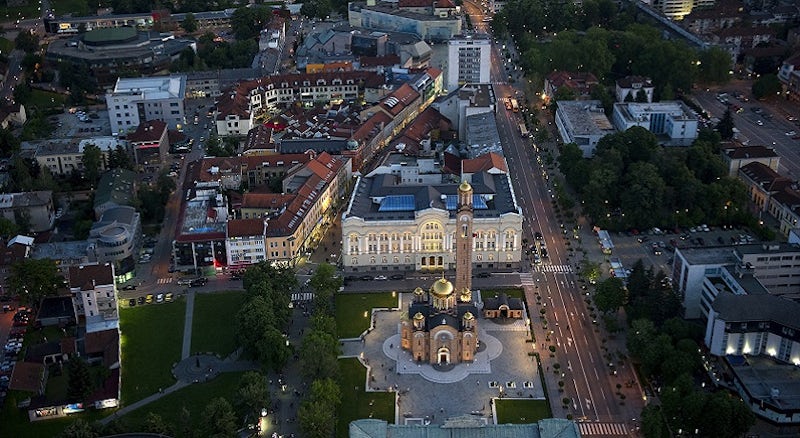