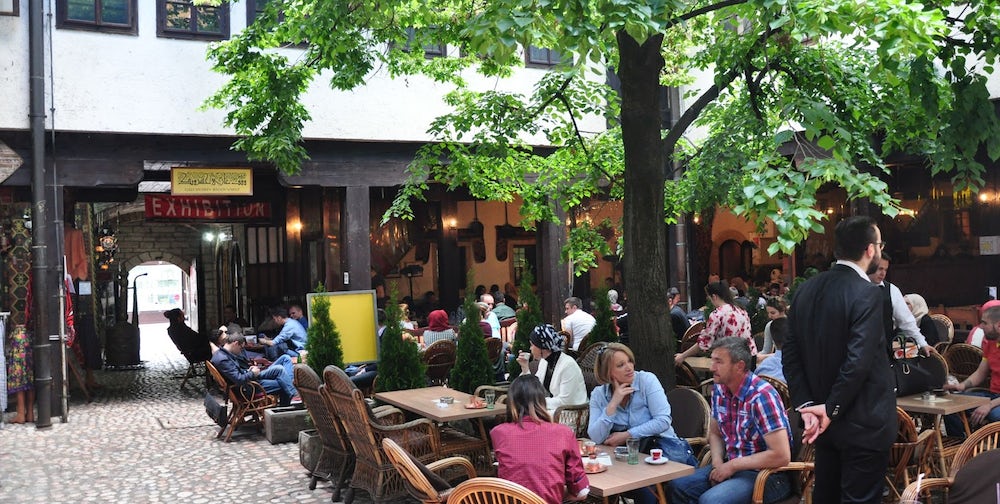 A must-read for foodies that want to explore the culture of Bosnia and Herzegovina through its cuisine. In this article, I'll tell you about some excellent restaurants for traditional food in Sarajevo.

The people of Bosnia and Herzegovina are very proud of their cuisine. It was developed under many influences of continental European, Mediterranean, Oriental and Eastern cuisine, and eventually became unique not only in its taste but also in the specific ways of cooking and serving meals.

This especially goes for Sarajevo and its restaurants as some of them kept hundreds of years old recipes and serve authentic dishes that are exclusive to the city.

So, here we have a short list of restaurants that you shouldn’t miss while enjoying your stay in the old part of the city: 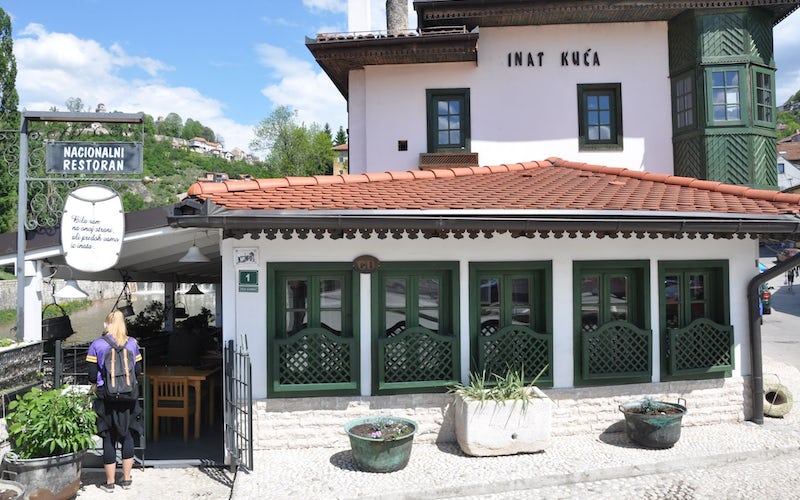 This restaurant, located in the center of old Sarajevo, offers a wide range of traditional Bosnian dishes such as Bey's soup, shish kebab, klepe, okra but also steaks, homemade bread and fresh vegetable salads. On the menu of ‘Inat kuća’ you can also find freshly baked Bosnian pies and the traditional desserts.

Along with tasty food, restaurant bar has a very good selection of homemade fruit brandies and wines. If you're traveling in a group, ‘Inat kuća’ has special offers and discounts.

Being experts in so called 'slow cooking' technique, chefs of this restaurant recommend to visitors to try a Bosnian pot, dish originally prepared in earthenware with layers of beef and lamb meat, potatoes, onions, tomatoes, cabbage and root vegetables.

When visiting ‘House of spite’, many foreigners are wondering about its strange name. And certainly, if you are going to eat here, you should know a story behind the name of the restaurant.

The house that is nowadays home of this national restaurant has entered into history and became one of the legends of Sarajevo during the rule of Austria-Hungary monarchy in this country. Originally built on the site of one of the most famous buildings in capital city of Bosnia and Herzegovina, City Hall, this house was supposed to be demolished in 1895. But the stubborn owner, 'out of spite', accepted the offer only if his house would be moved on the other side of the river, just across the new and shiny City Hall. So house was moved to the other side in its original form – brick by brick, stone by stone.

The house has changed a lot of owners to this date, but it has retained the authentic Bosnian look. 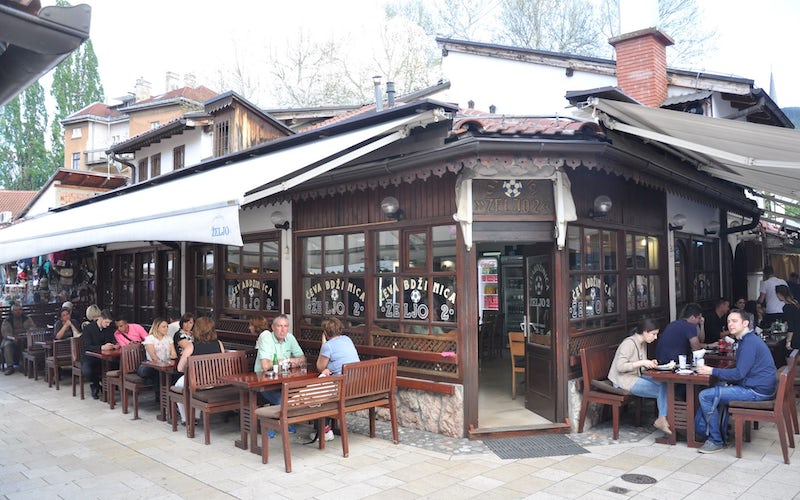 Anyone who vists Sarajevo needs to try the most famous Bosnian street dish, grilled meat fingers known as ćevapi. And if you happen to be in the old part of the city, then you certainly must go to ćevabdžinica 'Željo'. Food is fresh and simple, served with traditional pita bread - somun and optional - kajmak (soft cream cheese), yoghurt and fresh onions.

On the very simple menu of this food joint, you will also find few more grilled delicacies made of beef meat. It's also very cheap, you will pay from 2 to 5 euros most for different size portions of the dishes.

And additional, if this place is to crowded, the same owner opened another ćevabžinica – 'Željo 2' just across the street! 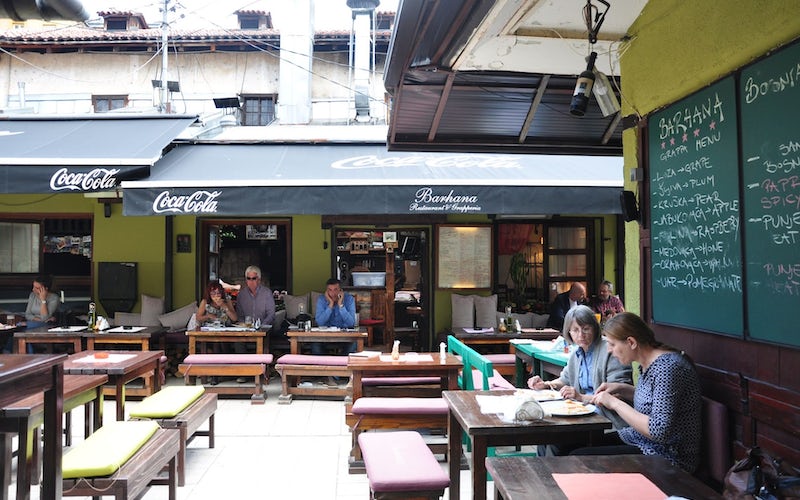 Here's another restaurant situated in the old part of the Sarajevo that offers a range of traditional but also international dishes for everyone's taste. It's a perfect place to have a Bosnian pot but also a tasty pizza or risotto. ‘Barhana’ is also a favorite spot for visitors and expats, so you can often hear people at the tables speaking different languages and hanging out together after the dinner.

If you are dining in ‘Barhana’, try the homemade grappa, rakija, which is made of honey, cherries or walnuts and domestic beers. In the summer months, it has an open terrace and people often choose to have a few drinks and enjoy the night out in a cosy atmosphere of the restaurant. 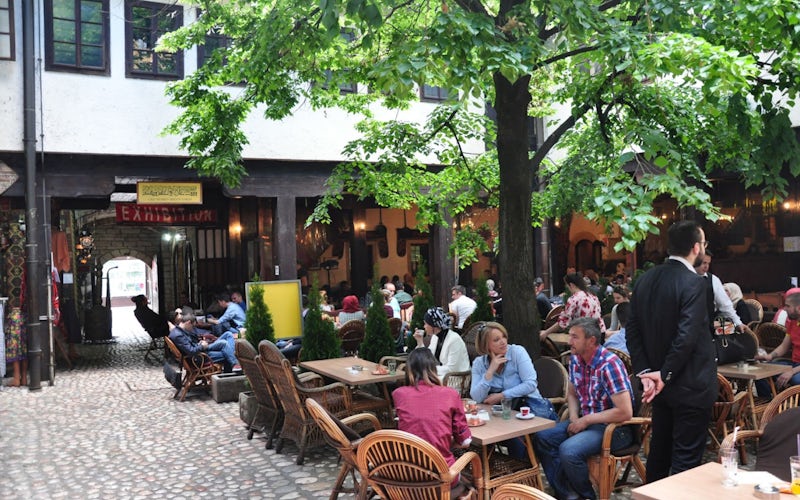 Morića Han is an old building originally built in 1551 in Sarajevo, during the Ottoman era. It's the only suriviving han (roadside inn) in the city and at the time it could accommodate about 300 passengers and 70 horses. It survived several fires, but always reconstructed, and today's management of the endowment rents the han to several traditional businesses such as a traditional restaurant also called ‘Morića han’ and a Persian carpet shop.

The restaurant offers a different selection of classic Bosnian dishes. It also has a big open terrace with a good shade and it's a perfect place to escape the city heat during the summer months.

If you are in ‘Morića han’, you should definetely have a cup of Bosnian coffee, traditionally served in a copper pot and cups. Bear in mind that this restaurant does not serve alcohol, so if you want to enjoy some drinks after the meal move to some of the nearby bars or pubs. 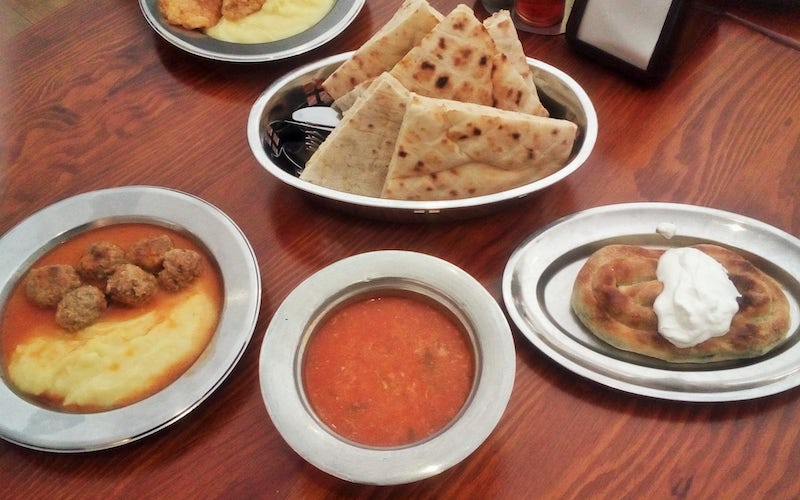 Original recipes, slow cooking technique, friendly staff and relaxed atmosphere – this is what makes ASDŽ a favorite lunch spot in the heart of historical Baščaršija.

In case you're wondering what a ćevabžinica and what an aščinica is, we will shortly explain. The meaning of the former word is a food joint that mostly serves traditional grilled dishes and the second word refers to slowly cooked food mostly based on soups, stews and stuffed vegetables but also pies and traditional desserts.

Anyhow, aščinica ASDŽ is a real champion in second, and if you eating here, you have to try either sarma (stuffed cabbage leaves), japrak (stuffed grape leaves), stuffed onions or zucchinis. Or even better, try šarena dolma – a colorful plate made of each! Don't miss out on the layered cheese and spinach pie here as well, as they have a special way of preparing it.

Bear in mind that most of the dishes are slowly cooked for hours but still freshly served and that the place is very popular, so you may miss some of the best dishes if you go late in the afternoon. If this happens, just go another day, it's worth it!