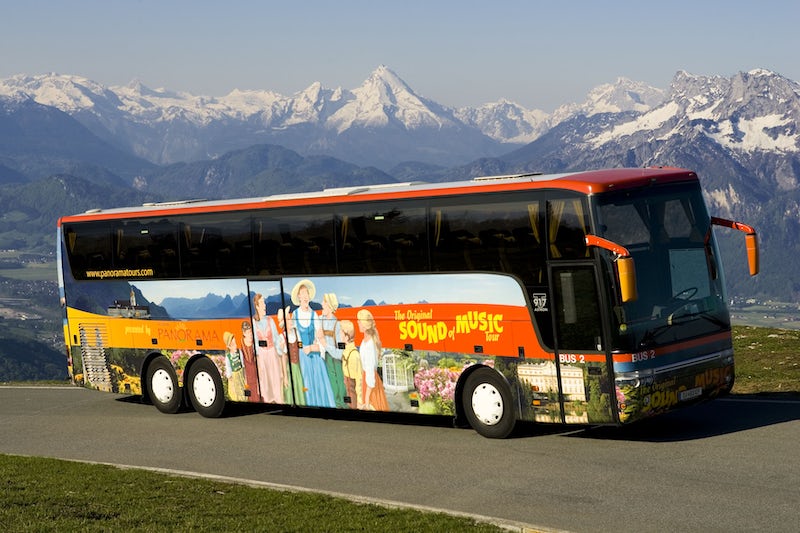 Come and join us on a wonderful ride with breathtaking views and explore the original shooting locations from The Sound of Music in Salzburg and the Lake District inclusive the wedding church in Mondsee.

Experience with us the most beautiful sights of Salzburg! See breath-taking views and amazing landscapes where the opening scene from The Sound of Music was filmed. Fulfill your childhood dream and visit during a live-guided tour all the famous filming locations in and around the city of Salzburg and sing- along your favorite songs.

After the huge success of the Broadway Musical The Sound of Music written by Rodgers & Hammerstein in 1959, film director Robert wise and a whole cast of 250 people came to Salzburg in 1964 to create a wonderful movie about the story of the Singing Trapp family from Austria which Maria von Trapp released in the book “The Story of the Trapp Family Singers” in 1949. During the filming of the famous movie Salzburg Panorama Tours had the privilege to take the crew to the various filming locations in Salzburg and its surroundings.

The film starring Julie Andrews as Maria von Trapp and Christopher Plummer, who had the role as the Captain von Trapp, became a great international success, awarded with 5 Oscars becoming the highest grossing movie ever and has reached cult status within the years.

Relive the movie and follow the traces of the Trapp Family on a tour through Salzburg. Feel like Julie Andrews by visiting all the original film locations and hear some fascinating facts about the movie and also the historical and architectural parts of the City of Salzburg, the countryside as well as the Lake District. Enjoy the tour highlights whilst listen to the Original Sound of Music soundtrack and feel free to sing-along to your favorite songs, like “My favorite things”, “Do-Re-Mi” and of course “Edelweiss”. Our guide knows all the facts around the movie, the filming locations, the Trapp Family and is pleased to share them with you.

Visit the gorgeous Mirabell Gardens See and see where the song "Do-Re-Mi" was filmed. After or before joining the tour, we recommend spending some time in the gardens on your own to explore the Pegasus Fountain where Maria with the kids where dancing around, as well as the Do-Re-Mi steps.

Enjoy a spectacular view on the lakeside at Leopoldskron palace which was used in the film as the von Trapp family home. During this photo stop you will see the Captain´s backyard and private palace gardens mirrored by the lake where the famous boating scene was filmed.

Here the famous song "16 going on 17" as well as the kissing scene of Maria and Baron von Trapp were filmed. Take a picture with the original gazebo rebuilt especially for all movie fans in the gardens of Hellbrunn Palace.

Have a look at Nonnberg Abbey which is still an active women’s nunnery. The "real" Maria was a novice in this abbey and she also got married there to Baron von Trapp. The convent does not allow visits within its walls, but you can walk up to the front gate of their Gothic Church for a visit during mass service hours.

After exploring the sights located in the center of Salzburg, you will drive to the beautiful Lake District, passing Lake Fuschl and Lake Wolfgang, where they took panorama shots and parts of the picnic scene were filmed. Enjoy some unforgettable views over Lake Wolfgang during a photo stop in St. Gilgen.

The famous wedding scene in The Sound of Music with Julie Andrews as Maria and Christopher Plummer as the Baron von Trapp was filmed in this beautiful church. Afterward exploring the chapel you have some free time to walk through this little picturesque town on your own or have an original “Apple strudel” in one of the traditional coffee houses.